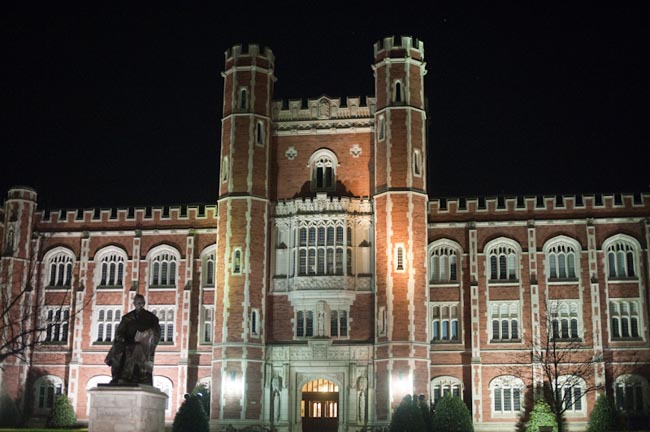 A video showing members of the University of Oklahoma fraternity Sigma Alpha Epsilon singing a racist chant emerged recently, drawing near-universal condemnation. Statements by University of Oklahoma President David Boren and black student group Unheard (which released the video to the public) denounced the chant and those who participated in it. The national Sigma Alpha Epsilon organization has distanced itself from its Oklahoma chapter, calling the incident “despicable and unacceptable.” The video shows a group of SAE members and dates perched on a charter bus repeating the mantra “there’ll never be a n— SAE” and embellishing their chorus with “you can hang ‘em from a tree, but it’ll never start with me.”

The students appearing in the video are boisterous, enthusiastic and white. They chuckle as the bus sways and the chant swells. The video has drawn widespread ire and renewed public awareness of the painful and pervasive nature of racism in the United States. In response, the University of Oklahoma shut down its Kappa chapter of SAE and expelled the two members who apparently led the chant.

After the initial wave of outrage diminished, a second surge of concern crept in. Legal experts began to criticize the university’s expulsion of the two students as inconsistent with the protection given by the First Amendment to all speech, no matter how revolting that speech is. As a public institution, the University of Oklahoma is ultimately beholden to the laws of the federal government. Boren has defended his decision and holds the support of a large portion of the university’s student body, yet the university may have to answer to a legal challenge. In a statement to The New York Times, University of California-Irvine constitutional law professor Erwin Chemerinsky maintained that “hateful, racist speech is protected by the First Amendment.” Despite the video’s glaring bigotry, the students implicated in the video may be constitutionally absolved.

Was the chant legally permissible? Do students have the constitutional right to ignorant, malicious language? Yes, according to most legal commentators, because the chant wasn’t a direct threat. But are these the appropriate questions to ask?

Law outlined in the U.S. Constitution seems to occupy a sacred, untouchable sphere. It is made to be immune to critique, a set of premises that preempt and preexist all else. It is made natural. It is made moral. It becomes easy to confuse an argument about the constitutionality of racist speech with an argument about its human acceptability. Sure, the Constitution lets a stumbling frat boy from Oklahoma scream degrading slurs about his classmates, but it doesn’t enshrine his petty pejoratives.

When we write off the chant as a regrettable (but constitutional) action of a few, we turn away from the history of violence and hatred that birthed it. We cast all that aside; we play down its terror. In Tulsa, Okla. in 1921, the black community of Greenwood was destroyed by a white mob. 35 blocks of black houses and businesses were burned down; victims were left to survive the winter in tents after their requests for housing were ignored by local government. The 1907 Oklahoma state constitution segregated schools and outlawed interracial marriage. That same year Oklahoma instituted a literacy requirement for voting (with a generous grandfather clause, of course) and consecrated public discrimination. According to CDC data collected between 1999 and 2011, Oklahoma had the highest rate of black deaths at the hands of law enforcement in the U.S.

Law and morality, law and human decency, exist in tenuous and sometimes hazy alliance. What is legally valid is not always what is ethical. We should not let our sense of institutional integrity outpace our sense of justice. When we confuse legality with rectitude we hold lofty ideals over real individuals. Instead of asking whether something is constitutional, we should first ask ourselves: Was it right?