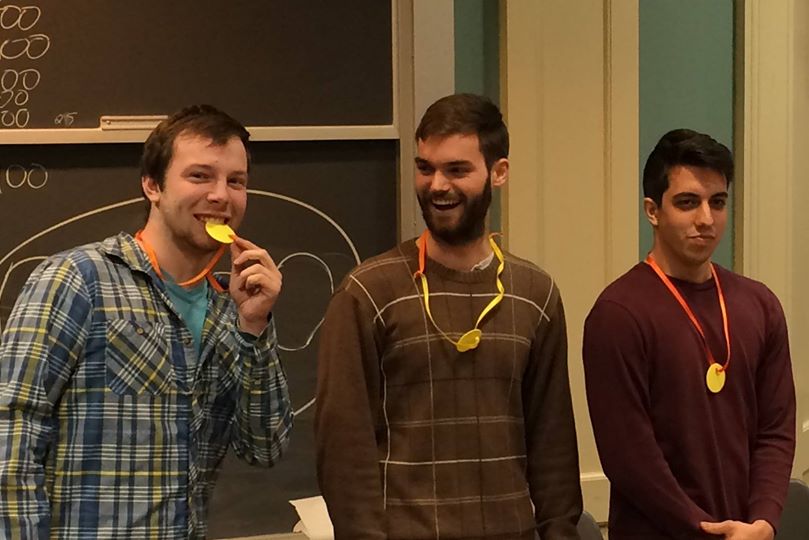 Saturday, March 21 marked the third annual Russian Language Olympics, a cultural celebration hosted by the faculty and students of the Russian and Russian and Post-Soviet studies departments. Students compete in a series of contests designed to promote and commemorate the legacy of Russian culture and history in an increasingly globalized world.

The panel of judges, composed of Russian and Post-Soviet studies faculty, evaluated each competition and determined the prize-winning recipients near the conclusion of the event. This year, the panel included Russian studies professors Bella Ginzbursky-Blum, Robert Mulcahy, Stephen Norris, Sasha Prokhorov, Elena Prokhorov and Kyrill Kunakhovich.

The audience also partakes in assessing the contestants of various challenges such as jeopardy, tongue twister battles, second-year skits and political debates.

The idea for the Russian Language Olympics originated three years ago from the mind of Victoria Kim, a former Russian professor and tutor at the College of William and Mary. Initial inspiration also stemmed from the College’s Chinese program, which organizes an annual Chinese language contest.

Professors Yanfang Tang and Qian Su advised Professor Sasha Prokhorov on the best means to create an event for a particular language community at the College, whether Chinese or Russian. Although Russian faculty members do sit on the judges’ panel, the event remains mostly within the hands and collective craft of fourth-year Russian students.

“I believe everyone in the room has learned something new [.]” —Alexander Porkhorov

The Russian Language House Tutor and Adjunct Instructor of Russian Studies, Olga Makarova, aided the committee in organizing the event and ensuring its success.

“The organizational process is not an easy one — the Organizing Committee is responsible for a great variety of things including T-shirt and logo design, three types of competition and prizes, food, promotion, etc. To facilitate the process there is a one-credit course in spring semester,” Makarova said. “Russian fourth-year students who are interested in organizing the event can register for the course. Then, throughout the semester, students and a faculty adviser meet weekly to plan, discuss and make the event happen,”

As described, a colossal amount of teamwork and collective organization are required to orchestrate the Olympics.

According to Costello, the Olympics provide Russian students with an informal alternative to standard classroom settings as another way to increase their appreciation and understanding of Russian language and culture.

“So much of studying and learning a new language is rote memorization and applying different grammar rules and everything like that… the Russian Language Olympics is supposed to be the other side of the coin,” Costello said.

Both Costello and professor Sasha Prokhorov believe that the Olympics ultimately enhance the relationship between the Russian faculty and their students and reflect the close-knit community of Russian studies.

“I really think it is an important event because it has this element of competition and game, this playful element which engages students better than just a classroom environment. And it is an excellent community builder, because while competing, students also socialize and learn about Russian language and culture,” Prokhorov said.

The Russian Language Olympics also serves to reinforce the importance of global perspectives at the College, intending to diminish cross-cultural misconceptions of East and West.

“I believe everyone in the room has learned something new about Russia on Saturday. It is important to promote language and culture, to educate people so there are less stereotypes and misunderstandings,” Makarova said.

“There definitely are parts of American culture that made their way into Russian, and you can often see that when learning the language (cognates and whatnot), but I don’t think it weakens Russian culture in any way,” Martyna Kowalczyk ’17 said. “If anything I think it’s useful for them to embrace parts of other cultures the same way it’s useful for us to do so.”

Correction: A photo caption included in a previous version of this article incorrectly identified the photographer. The photographer was Mike Blum.