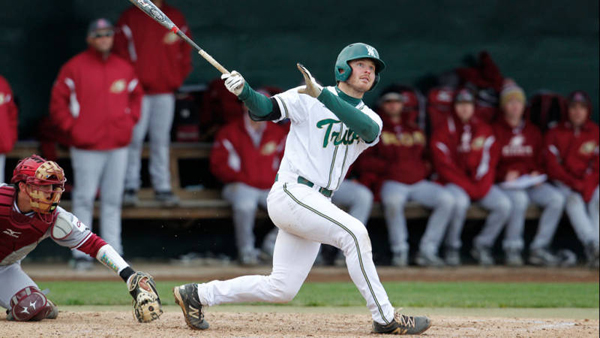 Bottom of the ninth, the score tied at three. Junior centerfielder Josh Smith takes first base after an Elon error. Senior third baseman Willie Shaw walks up to the plate and moves Smith to second on a sacrifice bunt. Another out occurs in the next at bat. With two outs, freshman second baseman Cullen Large walks up to the plate. The pitch — and Large smashes the ball toward second, where Elon commits another error. Smith runs home for the walk-off run, winning the series for William and Mary over the Phoenix.

“It was gutty… At the end of the day they don’t ask how [you won], they just ask how many [runs],” head coach Brian Murphy told Tribe Athletics. “We were able to find a way today.”

The College (12-11, 4-2 CAA) welcomed Elon (12-14, 4-2 CAA) to Plumeri Park for the first time since the Phoenix entered the Colonial Athletic Association. The Tribe split the Saturday doubleheader but won the series with a walk-off in Sunday’s rubber game.

The first game saw no hits or runs for the first three innings. That changed in the top of the fourth when Elon fired off a five-run rally. After a groundout and fly out, the Phoenix found its rhythm against senior left-handed pitcher Jason Inghram. Five hits and two errors by Large gave Elon the 5-0 lead before Inghram earned a strikeout to escape the inning.

“The first game we literally did not do one thing well in any facet.”

The Phoenix added a run in the fifth and another three in the sixth, putting the score at 9-0. Inghram was relieved in the sixth inning. The bullpen gave up three runs in the eighth and one in the ninth. The College’s lone run came in the bottom of the eighth when senior designated hitter Devin White brought in junior first baseman Charlie Gould with a double. The final score was 13-1, and Inghram took his fourth loss of the year.

“The first game we literally did not do one thing well in any facet.” Murphy told Tribe Athletics.

Saturday’s second game began looking like Elon would continue its hot streak as the Phoenix took a 1-0 lead and added three hits in the top of the first. However, the Tribe quickly scored two runs as Gould brought in two RBIs with a single, giving the College a 2-1 lead.

In the top of the third, Elon tied the game at two as sophomore right-handed pitcher Nick Brown surrendered two hits and one earned run in the inning. After the third ended, the fourth and fifth innings were uneventful. In the sixth, the Phoenix took the lead as a combination of a sacrifice bunt, a passed ball, a player hit by a pitch and a fielder’s choice brought in a run.

Senior right-handed pitcher Bryson Kauhaahaa took the mound as the seventh began. With one out to go in the inning, Elon’s Chris King blasted the ball to right field for a two-run homer to put the Phoenix ahead 5-2.

Just when the Tribe looked like it would drop the doubleheader, its bats exploded in a seventh inning rally. Sophomore shortstop Tim Hoehn began the inning with a single and advanced to third on consecutive wild pitches. Smith then walked, and freshman outfielder Zach Newell reached on an error while adding an RBI as Hoehn came across the plate. The bases were loaded as Large was hit by a pitch. Smith came in on a passed ball and Newell scored on a wild pitch. Large came in for a run as junior catcher Ryan Hissey reached first on a fielder’s choice. The Tribe added two outs, then continued the onslaught as freshman infielder Ryan Hall scored on a wild pitch and Hoehn doubled for a pair of RBIs. In the aftermath of the rally, the College scored seven runs on just two hits and led 9-5 while facing three different pitchers. The Tribe took the win to split the series. Kauhaahaa earned the win, putting him at 2-1 on the year.

“Obviously the seventh inning was the difference,” Murphy told Tribe Athletics. “ We did a decent job taking advantage of some free bases and getting some balls in play. Tim had that big double to get two runs late in the inning, that was the difference.”

Sunday’s rubber game saw junior right-handed pitcher Mitchell Aker at the mound, but he was relieved early in the third by junior right-hander Aaron Fernandez after Aker walked a batter with the bases loaded. Elon led 1-0 at the end of the third.

The next scoring play occurred in the bottom of the fifth as Shaw was hit by a pitch, stole second, advanced on an error, and came home off another error, tying the score at one apiece.

Elon responded with a run in the sixth to retake the lead 2-1, which the College eventually tied once again in the seventh as Shaw added an RBI on a sacrifice bunt. The Tribe took the lead for the first time in the eighth as White brought in Large with an RBI single.

The College brought in freshman right-hander Charlie Fletcher to close out on the mound in the eighth with two Phoenix players on base. Fletcher got the Tribe out of the dangerous position, and then the College claimed the 3-2 lead with White’s play. However, the game wasn’t over yet as Elon’s James Venuto hit a solo home run to center field in the ninth. Fletcher got out of the inning again, but the Tribe needed a good play to win without forcing extras. The Tribe won 4-3 after Large reached on an error for the walk-off RBI as Smith came across the plate, winning the series 2-1.

“We were pleased with winning today, but we can’t let it take away from some improvements we need to make.” Murphy told Tribe Athletics. “I’d like to play as clean a game as we can in the mid-week, get the bats going again and hopefully build some momentum.”

The Tribe begins a nine-game road trip, starting with two mid-week games. On Tuesday, the College takes on Radford at 6 p.m. Then the Tribe goes south to Norfolk, Va., to face Old Dominion at 6 p.m. Wednesday.