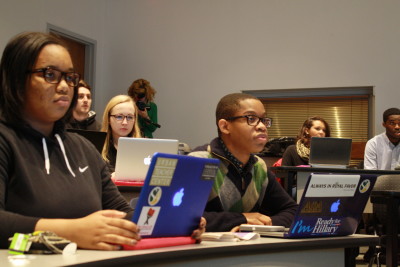 The Student Assembly Senate unanimously passed the We Are W&M Week Act during its meeting Tuesday.

The bill’s name changed from the I Am W&M Week Act to the We Are W&M Act. Sponsor Sen. Nadia Ilunga ’15 explained the change as an attempt to encourage engagement between members of the student body.

“In the past, I Am William and Mary [Week] has been something very much where you just go and watch a show,” Ilunga said. “What I really appreciate about the thought that has been put into We Are William and Mary Week is that … it gives people a chance to engage and broaden their perspectives.”

Taylor Mack ’15 spoke during the bill’s allotment for public comment. Mack is co-organizing the Black Lives Matter conference, which is set to take place in tandem with the We Are W&M Week. The conference plans to host three speakers: Broderick Greer, Crystal Lewis and Ethelbert Miller. Mack said the cost of the speakers would be between $2,500 and $2,750 and asked the SA to fund all of the speakers.

“We really feel that these speakers will kick off the event in the correct way and contribute to the overall atmosphere that we want for the conference,” Mack said.

Secretary for Diversity Initiatives Hannah Kohn ’15 also spoke during public comment to explain the week’s activities. The Culture Night will include at least seven student cultural clubs that will provide dishes to represent their culture. The bill also includes funding for tablecloths for the Table Talks and a ball pit. The ball pit will recreate the popular SoulPancake video “Take a Seat — Make a Friend” and encourage students to have conversations with each other.

Kohn provided the senate with an update about the Department of Diversity’s recent initiatives earlier in the meeting. She focused on the progress of the Table Talks series. Wednesday’s talk addressed appropriation versus appreciation, and future talks will encompass privilege and the idea of community. Kohn asked that more senators attend the Table Talks.

“In light of the resolution that was passed several weeks ago, it would be really great to see more senators there or members of Student Assembly to show that we are listening to our student body and are trying to understand what experiences they’re having,” Kohn said.

Additionally, the senate passed the Freshman Cookout Act by unanimous consent. It allocates $112 from the Student Assembly Reserves to support the class of 2018’s April 10 cookout on Yates Field. The bill, originally introduced during new business, was moved to old business because of the time restraint on chair and table rentals.

Chairman of the Senate Daniel Ackerman ’16 introduced the Approve the Budget Act. This bill introduces the budget for the 2015-16 academic year and recommends that the Student Activities Fee equal $98, the same amount as last year.

Ackerman assigned the bill to the finance committee, but requested that all senators look over the proposed budget.

Sen. J.C. LaRiviere ’17 updated the Senate about the follow-up to the Medical Amnesty Reform Resolution. A meeting with the administration will be set up now that the resolution has the approval of the Senate. Depending on the success of this meeting, he will begin an outreach initiative to raise awareness.

Sen. Chase Jordan ‘15, sponsor of the TedX Fundraising Act, informed the senate that the TedX conference sold out. Videos of the talks will be posted online within the next few weeks.