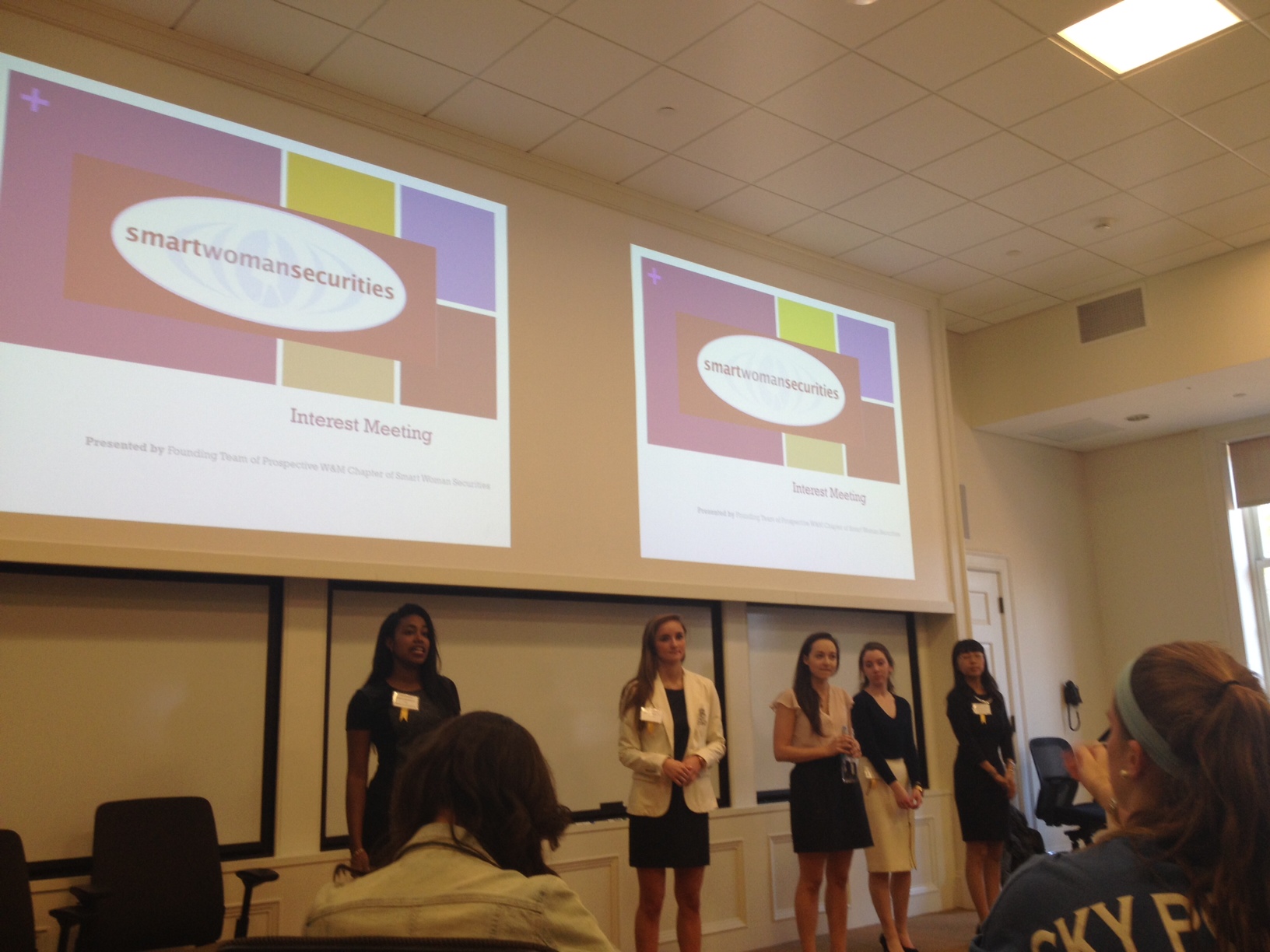 Last spring, Giana Castellanos ’16 began work to establish a chapter of Smart Woman Securities at the College of William and Mary. Now, with the status of “prospective chapter,” the executive founders of the group are hosting events for the student body and preparing for a 10-week seminar series.

Castellanos has been working with five other students since October 2014 to launch their chapter at the College. After a thorough application process, the group found out they became a prospective chapter in January.

“We have so many [General Education Requirements] at this school, but one of them is not finance,” Castellanos said. “Investing is a key skill to have. That’s what we’re here for.”

Castellanos found out about Smart Woman Securities at a networking event in New York City from a woman who attended Georgetown University. She reached out to Associate Professor of Economics and Finance Katherine Guthrie and Director of the Boehly Center for Excellence in Finance Julie Agnew and began contacting the national chapter of Smart Woman Securities about her plan to start a chapter. Guthrie and Agnew currently serve as faculty advisors for the prospective chapter.

“Personally, I think one of the reasons the organization is so important is that in today’s society women must be able to secure their own financial well-being,” Agnew said in an email. “If you read the research, women across the world score lower in financial literacy tests. Therefore, it is imperative that women improve their understanding of finance and take responsibility for their future.”

Through guest speakers, seminars and group projects, the prospective chapter’s mission is to empower women by providing them with financial literacy in an industry that is largely dominated by men.

“Part of it is correlated to comfort and confidence,” Lyons said. “This is useful to anyone. It’s important information.”

At an information session on Tuesday, the founding team announced a 10-week seminar series that will take place this upcoming fall. The seminars, which are set to start in September, will feature lectures, workshops and simulations; the series will culminate with a project. The series is open to women of all majors.

To become a member of Smart Woman Securities, participants must attend seven of the ten sessions. Once they have completed the program, members will have the opportunity to participate in research projects and will be put in touch with professionals who may serve as potential mentors.

In the near future, the prospective chapter will host the final event for their “soft launch” stage. This event, to be held April 10, will feature a question-and-answer panel with professionals, a networking lunch and subsequent breakout sessions.

The founding team will be notified if their group has achieved status as a nationally-recognized chapter April 30.

“We want to cater events to students at all levels of knowledge,” Lyons said. “[We’re] preparing for the birth of this demographic of financially-empowered women.”