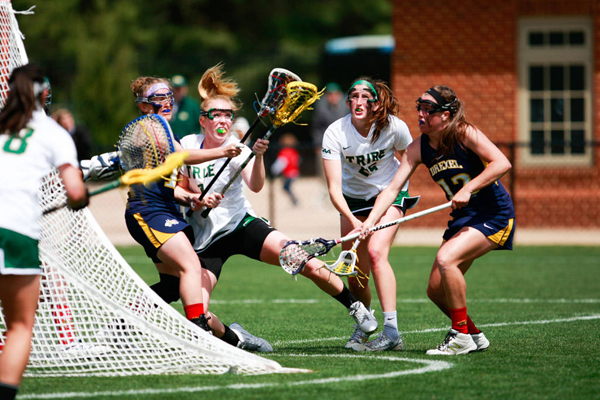 Like many college students across the nation, the Tribe spent a considerable portion of Easter weekend on the road, traveling to games Friday night and Sunday afternoon. But rather than the traditional reception of family, bunnies and candy, the College of William and Mary was welcomed by the Dragons from Drexel and the Pride of Hofstra in a quick kickstart to Colonial Athletic Association competition.

While Drexel’s spotty record doesn’t indicate it, the Dragons boast a gritty defense that ranked second in the CAA entering Friday’s game, as well as a goalie with the second-highest save percentage in the nation.

However, the Tribe managed to flank the Dragon defenders with a team-oriented attack, as nine players contributed to the 10 goals for the Tribe, despite Drexel saving ten shots on goal.

But a Tribe victory was no sure thing. Drexel’s attack managed to create an early 1-0 lead on the College six minutes into play after the defense fended off three Tribe possessions. Senior midfielder Ellen Shaffrey answered back for the College just 36 seconds later, knotting the score at one apiece.

The Dragons retook the lead at 22:36, but neither offense could create opportunities as the teams grinded against stiff defense for the next ten minutes of play. This is nothing new for the series: the previous three meetings have been decided by a two-point margin or less — two of which went into overtime.

The College was determined to take the victory in regulation, finally finding the back of the Drexel net off the stick of sophomore defender Abby Junior at 11:42. With the newfound momentum, the Tribe began to find the cracks in the rock-solid Drexel defense, as freshman attack Abby Corkum, junior midfielder Zoe Boger and junior attack Kelly Markins tacked on three goals in the Tribe’s pivotal 4-0 run. Possession time proved crucial to weathering down the Dragon’s resistance as the Tribe claimed 11 of the 17 draws on the game.

Drexel was able to muster another goal to close the half at 5-3.

Out of the locker room, the contest decelerated into trench warfare, neither team able to find the other’s weakness. Finally, freshman midfielder Danielle Palmucci flicked in a pass from Martins on her free position shot opportunity, giving the Tribe a 6-3 lead.

Drexel couldn’t keep the pace, as a Dragon goal was met with a 3-0 run by the Tribe into the last seven minutes of play. Sophomore midfielder Shannon Quinn, freshman midfielder Megan Brophy, and junior midfielder Michele Goss all contributed to the Tribe’s scoring spree.

Goss, the only player to strike twice, added the coup-de-grace goal at 1:18 after a Drexel score at 2:38 as the Tribe persevered 10-5 in the CAA opener.

However, the Tribe did not have long to celebrate the conference victory, as Hofstra awaited the Tribe just 39 hours and 120 miles away after the win over Drexel. As many consider the Pride the best-suited challenger to the CAA’s top ranked team No.14 James Madison University, especially after upsetting the Dukes in a Friday matchup the Tribe certainly expected the contest to be a battle.

Despite the emotional victory on Friday, the Pride did not overlook the road-weary Tribe, as the College sputtered into the locker room down 5-1 after a lackluster first half.

True to its character as a second-half team, the Tribe stormed out of the locker room, forcing a turnover on Hofstra’s opening possession and cashing in the opportunity with a goal by Corkum, the fourteenth of her impressive rookie season.

However, the Pride soon countered with a goal of its own at 23:41 after a Tribe penalty. The game then spun out of control for each defense; Hofstra capitalized on a College penalty to score in just 36 seconds, only to be answered by Shaffrey’s twenty-third tally of the season 25 seconds later. Despite the offensive momentum, the Tribe defense still failed to find its footing, as another Pride goal in 41 seconds extended the Hofstra lead to 8-3 with 21 minutes remaining.

After the offensive explosion, neither team could manage to string together another fruitful possession, going nearly eight minutes before Hofstra again pushed its advantage to 9-3.

A late rally by the Tribe couldn’t narrow the score down any further than a four-goal deficit, though Shaffrey fired into the back of the Hofstra cage five times on the night, as she leads the team with 27 goals. Yet the early deficit proved too great for the College to overcome.

Draws once again proved to be a crucial factor; the Tribe ceded the category to Hofstra by a 13-10 margin. In games when the College loses the draw control game, the Tribe’s record stands at 1-6, as opposed to 4-1 in games with the draw control advantage.

Up next for the Tribe is a continuation of the conference schedule in a single-game weekend against CAA opponent Elon. Start time is set for 1 p.m.