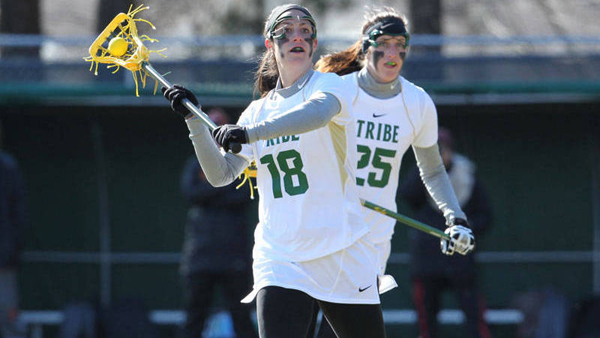 According to the New England Lacrosse Journal, the premier girls’ lacrosse goalies will consistently save just under 50 percent of shots on goal. Elon’s Rachel Ramirez, the second-ranked goalie in the Colonial Athletic Association with a 45.9 save percentage entering the game against the Tribe, boosted her individual ranking guarding the net as she and the Phoenix rejected William and Mary to the tune of an 8-7 margin with an absurd save percentage of 68 percent Sunday at Rhodes Stadium in Elon, N.C.

The Tribe (5-8, 1-2 CAA) attack stalled out in the squad’s third consecutive CAA road game, converting just 25.92 percent of its 27 shots, marking the worst shot percentage of this season- and the worst since a 21.67 percent performance against Albany on March 18 of last season. Statistically speaking, the College had more success against No.1 Maryland, No.8 Duke, and No.5 U. Va than against unranked Elon (8-6, 1-3 CAA), the same Elon team that lost to nationally ranked No. 18 James Madison 22-5 last week.

Ramirez denied two Tribe shots early in the game, after which Elon successfully cleared the ball down the attack, which struck first for the opening goal at 28:35.  Though losing the draw again, Elon managed to tack on a second goal just two minutes later.

Finally, junior midfielder Zoe Boger collected a loose ball in front of the net after another Tribe shot was rejected, firing past Ramirez for a goal at 25:29.

But the Tribe couldn’t manage to create more opportunities as the Phoenix rattled off a 4-0 run in the next seven minutes of play. Despite owning five of the first seven draws, normally a good indicator of the Tribe’s offensive success, the Tribe found itself in a 6-1 hole early in a key conference matchup.

Freshman attack Abby Corkum finally started to build some momentum for the Tribe, drawing a penalty and cashing in on the subsequent free position shot at 18:43 for her 15th score of the season. Ramirez rose to the occasion again, denying two more Tribe shots before the Elon defenders finally retook possession. The Phoenix extended their lead to 7-2 with a goal at 16:42.

But the Tribe was determined to get better returns on their offensive effort before the half. Boger knifed through the defense again at 10:53 for another Tribe goal; followed by senior midfielder Amanda Johnson’s 13th tally of the year with just six minutes to play. The Tribe again found itself against a stonewall, as the attack couldn’t manage to close the deficit any further prior to the half.

With a 7-4 deficit coming out of the locker room, the College set out to break through the stiff Elon defense. After a William and Mary turnover, the Phoenix attack faced a rejection of its own, as the Tribe persevered through a four minute possession with three shots before finally retaking command of the ball.

However, it required a seven on six man-down situation in the College’s favor for the Tribe to get its first goal of the half. Sophomore midfielder Shannon Quinn rifled in the shot a full ten minutes after the halftime break in the man-up play. Though the Tribe played with a sense of urgency, production remained abysmal as time ticked down 15 full minutes. Even then, it was the Phoenix, not the College, that scored next with five minutes left.

Down 8-5, the Tribe finally began a comeback bid that proved far too little, too late. A goal by senior midfielder Ellen Shaffrey at 3:31 gave the Tribe a glimmer of hope, further inspired by freshman midfielder Danielle Palmucci’s rocket into the back of the Elon net with just 1:45 left in regulation.

However, after having an 11-5 draw advantage for the game, the Tribe surrendered the most important draw of the game, allowing Elon to scrub off a minute and thirty seconds of the last 1:45. The Tribe couldn’t manage a shot in the final 15 seconds, as they fell 8-7.

Of course, with a shot percentage a full 15.75 percentage points below the season average (41.67 percent), the anemic College offense gave little reason to expect a last shot effort  to be successful, as poor shot placement by the Tribe and excellent goalie play contributed to an insurmountable 68 percent save percentage for Elon. For perspective, the Tribe is 0-5 on the season when the opponent posts above a 50 percent save mark—and four of those games, all against ranked teams, were lost by double digits.

Elon also marks only the second game in which the Tribe won the draw control battle but lost the game.

Up next for the Tribe is a packed weekend of CAA games as Delaware comes to Williamsburg on Friday at 5 p.m. at Martin Family Stadium. On Sunday, the Tribe will host Towson at 1 p.m.