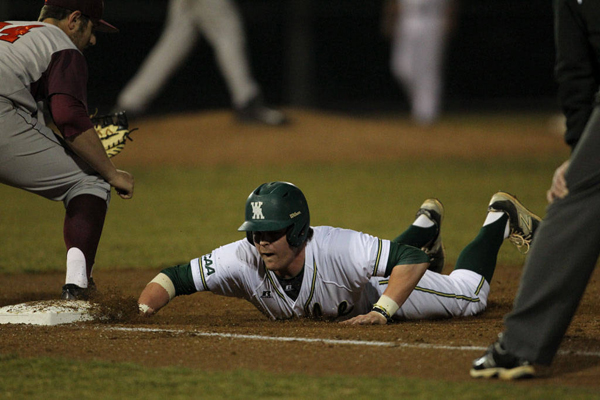 The Tribe’s game against Old Dominion was its second of the season. On April 1, the Monarchs bested the College 4-0. The loss remains the sole shutout the Tribe has faced in 2015.

The College (15-18, 6-6 CAA) got off to a quick start. The Monarchs (17-19, 5-10 C-USA) failed to get a hit in the first inning. The Tribe came up to the plate holding a four-game losing streak and desperate for a win. During the bottom of the first, the College added five runs. The productive inning began with ODU’s starter Thomas Busbice walking freshman second baseman Cullen Large, Thomas Busbice. Following Large, junior designated hitter Ryan Hissey singled and Large moved to third. Junior first baseman Charley Gould added two runs batted in, plating Large and Hissey with a double to right field. With a 2-0 advantage, the Tribe rally continued with senior third baseman Willie Shaw getting to base through a walk followed by a strong double to left center field by sophomore shortstop Tim Hoehn to bring in Shaw and Gould to add two runs for a total of four. Hoehn came home for the fifth run of the inning when Busbice threw a wild pitch. The rally ended with two runners stranded on base after Large

The next two innings were relatively quiet, with an Old Dominion run in the top of the third as the only score. After three, the Tribe led 5-1.

The momentum changed in the top of the fourth as the Monarchs scored six runs off three hits in the top of the inning to take a 7-5 lead. Freshman right-handed starting pitcher Robert White gave up four runs before he was relieved by sophomore right-handed pitcher Daniel Powers. Powers gave up another two runs before escaping the inning with a flyout.

The College responded immediately with a four-run effort in the bottom of the inning, regaining the lead 9-7. After the Monarchs called the bullpen to switch out Busbice in favor of Jared Koenig, the inning began with a double by Large. After a quick flyout by Hissey, Gould singled. The single allowed Large to advance to third and then score after an error by the Monarch left fielder. Shaw added a double, advancing Gould to third. With two in scoring position, Hoehn hit an RBI single, plating Gould. Once again, the Monarchs changed their man on the mound, removing Koenig and putting in Michael Rienerth. Senior catcher Devin White doubled for a pair of RBIs, bringing Hoehn and Shaw home. A flyout once again ended the inning with two men left on base.

Trailing 9-7, the Monarchs slowly chipped away at the Tribe’s lead, adding a run each in both the seventh and eighth, tying the game at nine. After three scoreless innings, the College’s bats once again came alive in the bottom of the eighth. Devin White singled with one out, and freshman left fielder Ryan Hall blasted a long double to left for an RBI. Sophomore right fielder Ryder Miconi brought in the final run of the night with an RBI single to put the score at 11-9.

The Monarchs had one final inning to recapture the lead. Junior right-handed closing pitcher Joseph Gaouette took the mound and held strong as he struck out three consecutive batters, retiring the Monarchs for good.

Devin White and Gould both led the way for the Tribe, each hitting 4 for 5 on the night, with two RBIs apiece. The College finished the game with 17 hits on 41 at-bats. Senior right-handed pitcher Bryson Kauhaahaa took the win for his time on the mound in the seventh and eight innings. Kauhaahaa gave up one unearned run and had two strikeouts

The Tribe traveled to Charlottesville, Va. to face the Virginia Cavaliers Wednesday at 6 p.m.

After taking out one in-state opponent Tuesday night with an 11-9 win over Old Dominion, William and Mary fell to another Wednesday, dropping a tight 3-2 contest against Virginia in Charlottesville, Va.

The Tribe (15-19, 6-6 CAA) came out swinging in the top of the first, but failed to produce a run. With one out, junior catcher Ryan Hissey hustled out an infield single, moving to second on a base hit by junior first baseman Charley Gould. However, senior third baseman Willie Shaw bounced into a 6-4-3 double play, and the Cavaliers (22-14, 7-11 ACC) escaped the jam.

Following a scoreless second, the College broke the deadlock in the top of the third. After two quick outs, freshman second baseman Cullen Large singled to center field. Hissey followed with a double, plating Large from first and giving the Tribe the early 1-0 advantage.

The Cavaliers responded with two runs in the bottom of the fourth off junior right-handed starting pitcher Mitchell Aker. Virginia’s Kenny Towns led off the frame with a solo home run to left center field, tying the score at one. Joe McCarthy came up to bat next for U. Va. and singled, advancing to second on a sacrifice bunt. After the Cavaliers’ Robbie Coman reached first on an error by Shaw, Virginia’s Jack Gerstenmaier singled to drive in McCarthy to put Virginia ahead.

The Tribe answered with a run in the top of the fifth. After recording two outs, U. Va.’s Derek Casey plunked freshman right fielder Luca Farina, and then balked to move Farina to second. Large singled, bringing Farina home to tie the game at two, but was thrown out trying to advance to second on the play. The College did not put a man on base for the rest of the contest.

“Offensively, we didn’t give ourselves a ton of chances,” head coach Brian Murphy told Tribe Athletics. “We were able to score first, which was big, and then we were able to get a big hit from Large to get the second run in, but not quite enough offense tonight.”

The Cavaliers put two runners on in the fifth and sixth innings, but could not bring anyone home. Aker escaped the fifth with a two out fielder’s choice off the bat of the Cavaliers’ Kevin Doherty, but he began the bottom of sixth by hitting Coman before surrendering a single to Gerstenmaier. After striking out the next batter Aker was relieved by freshman right-hander Charlie Fletcher, who induced a crucial double play.

However, Fletcher gave up what was ultimately the winning run in the bottom of the seventh. Virginia’s Daniel Pinero started the inning with a single, pushed to second on a balk following a fly out. After a wild pitch advanced Pinero to third, Towns roped a single up the middle to put Virginia ahead for good.

“We knew coming in tonight if we wanted to beat these guys we’d need to play a really good game,” Murphy told Tribe Athletics. “I think on the pitching and defensive end we did that well enough tonight…I just think we needed to adjust a little bit better in the middle innings to give ourselves a better chance on offense. The effort was there, but we just didn’t execute the plan quite well enough.”

Fletcher fell to 3-1 in his first loss of the 2015 campaign for the Tribe, giving up a run and two hits in an inning out of the bullpen. Virginia’s Alec Bettinger earned his third win of the season, pitching two perfect innings in relief, striking out two.