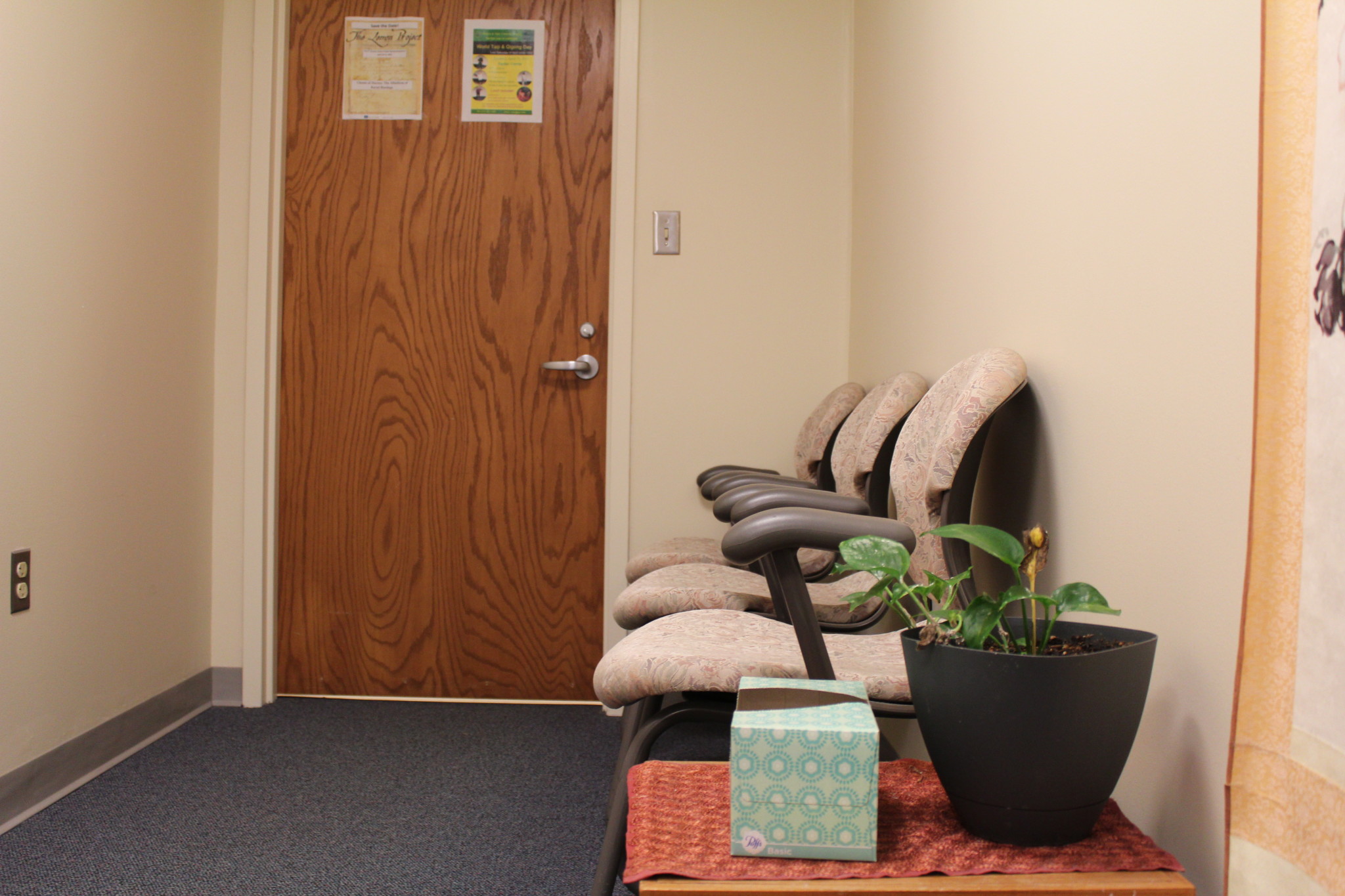 The document provides the number of scheduled and attended clinical service appointments at the Counseling Center by staff member during the 2014-15 academic year through March 4. Figures taken from scheduled appointments made through March 4 of this academic year show that students were scheduled to meet with trainees —  interns or practicum students —  41 percent of the time, and with therapists without psychologist licenses 17 percent of the time. The discrepancy between scheduled and attended appointments in these categories is negligible.

Four interns and two practicum students make up the Counseling Center’s trainee pool, and they account for the largest portion of scheduled appointments. The International Association of Counseling Services, an accreditation association for university and four-year college counseling services, holds an upper limit for total clinical services provided by trainees at 40 percent.

The IACS visited the College’s Counseling Center in April 2014 and produced a field report for College administrators and the IACS review board. Once accredited, a center is reevaluated every four years based on a written report by the counseling center under review, and a field visit is conducted every eight years in conjunction with the reaccreditation. The College received reaccreditation after the 2014 reevaluation.

The report noted the center’s plans to reduce the number of practicum students to relieve its licensed psychologists of a portion of their training duties, as described by the center’s Director of Training Carina Sudarsky-Gleiser. She also told the IACS team that the center planned to reduce the amount of clinical services provided by trainees (estimated in 2014 at 40 percent by the IACS report, as opposed to the College’s reported 30 percent).

The College cut staff this year, reducing the number of practicum students from four to two, but the percentage of clinical services provided by trainees totaled 41 percent as of March 4. Counseling Center Director Warrenetta Mann said the distribution of trainees will shift next year, with the employment of three interns and three practicum students. Because practicum students work a 22-hour week and interns work a 40-hour week, Mann said this change will reduce the percentage of clinical services provided by trainees as one full-time trainee position will become a part-time trainee position.

Another 17 percent of scheduled appointments in 2014-15 were made with two non-licensed staff therapists, who as recently as January 7, 2015, were listed on the Counseling Center’s website as staff psychologists. According to the Virginia Board of Psychology’s regulations under 18VAC125-20-65, section B, article 4, candidates for school psychologist licensure may not refer to or identify themselves as applied psychologists, clinical psychologists or school psychologists. The site has since been updated, but the original version can be viewed at flathatnews.com. Kelly Crace, associate vice president for health and wellness and director of health promotion, said that, before and after the change, the employees’ position descriptions were congruent with the state.

“However, there often can be assumptions made about a certain term that implies something for people, so for us to better clarify that, that’s why we changed the name,” he said.

Another 17 percent of scheduled appointments in 2014-15 were made with two non-licensed staff therapists, who as recently as January 7, 2015, were listed on the Counseling Center’s website as staff psychologists.

The use of employees who do not hold a psychologist license is not illegal so long as they have fulfilled all requirements for licensure, aside from passing the licensing test. They are required by the state to receive supervised review hours with licensed psychologists at the center two hours each week until they are accredited. They are not permitted to assist in intern or practicum student training.

“Generally, we work toward helping people fulfill what’s important to them and their professional goals, and that would include licensure,” Crace said. “However, we are absolutely within the boundaries of what state regulations are in terms of how we hire someone and how they function as a staff therapist.”

Nancy Roncketti, executive director of IACS, said the association considers unlicensed staff members as professional staff — not trainees — in their calculation of clinical services, since they have completed their master’s degrees.

The Counseling Center does employ seven licensed psychologists, who cover 34 percent of scheduled clinical services for students. Two of the psychologists are part-time and three of them cover less than 5 percent each of the total number of scheduled appointments, while the remaining four provide 5-7 percent.

Both Crace and Mann said the clinical services appointments of each employee do not take into account the services provided when a licensed staff psychologist reviews a trainee’s caseload or group therapy offerings.

“When a supervisor is meeting with a supervisee to discuss their caseload, to discuss what they’re doing, that is a direct clinical service because there’s case hypothesis, there’s case assessment, there’s therapeutic process tracking,” Crace said.

According to Mann, there were five therapy groups last fall and six during the current semester. These groups average six to nine sessions during the semester, typically meeting weekly once they begin.

Mann said that, alongside therapy and training sessions, she and other licensed psychologists perform administrative duties that prevent the Counseling Center from becoming an isolated element on campus.

In the calculations from the March 4 list of Counseling Center appointments, eight of the 4,283 scheduled appointments took place with Deidre Connelly, who works specifically with athletes (primarily in a performance enhancement capacity), and 341 were with Christine Ferguson, the mental health services coordinator who handles off-campus referrals and emergency follow-up sessions with students and their families. These numbers were included in the calculations, accounting for the missing eight percent of scheduled clinical service appointments, but the meetings were not considered clinical services by The Flat Hat due to their specificity.

On April 13, the College received notice of the third suicide of a student on campus this academic year and the sixth since the Class of 2015 stepped foot on campus. The news prompted the changing of cover photos on Facebook, statuses and emails of support; the placing of flowers by the Crim Dell; and other demonstrations of “One Tribe, One Family.”

Responses to these tragedies also prompted movements to help better the counseling services offered at the College, including student and alumni columns in The Flat Hat and other calls to action.

Before the death of Paul Soutter ’17, students had voiced concern about various aspects of the Counseling Center, including wait times for initial appointments, which could last up to two weeks, according to the IACS April 2014 field report, and about the ability to schedule an appointment with the center’s part-time psychiatrist, whose wait times are even longer.

“It’s going to take some time for us to kind of shake the bushes and find that right person, because we also want to find someone who is a good fit for William and Mary,” Mann said.

Crace also said the Counseling Center plans to add two new services once they are approved by the Board of Visitors: ProtoCall and Therapist Assisted Online.

Currently, the Counseling Center’s staff does not have the capacity to handle after-hour calls unless they are emergency or urgent situations. If necessary, students can use the 1-800 suicide hotline for help, but Mann said this is not as welcoming or comfortable as a College-specific afterhours call.

“For a long time, we’ve been working with people to talk about that there is a gap there and that we have a need for a way for students to be able to reach out after hours — [on] weekends, whenever things are occurring — that may not rise to the level of urgent, but for that person, in that moment, they may really need somebody to reach out to.”

If approved, ProtoCall will provide an afterhours call service for students and operate within the policies and procedures of the College’s Counseling Center. ProtoCall would communicate information to the Counseling Center about who is calling them and what was discussed, and allow the center to “plug in” to more students.

The second service, Therapist Assisted Online, combines personalized, online programmatic training with the opportunity to interact their learning with a therapist. If approved, TAO would help students develop a personalized plan and training for managing situations that instigate anxiety and other psychological issues, while also offering regular access to a therapist.

“It expands our accessibility. … It’s just attending to another population of students that might find this helpful,” Crace said.

“The reality is [that] we’re pretty well staffed and I think when you put all of those things together [overuse of unlicensed staff over licensed staff] and you look back at the student group that has been wanting to donate funding to us, it’s almost — the words that are coming to mind are ‘nauseating,’ ‘sickening’ — to think that we would put out a message like that and ask the students to contribute to us as if we’re in distress, and the reality is that we’re not managing our own shop very well and we’re doing it in a way that I think is not respectful to the students and actually puts people at risk,”

Columns and responses since the loss of Soutter last week often highlight the importance of finances in Counseling Center operations and what money can or does offer. Some say that the center is in need of more financial support to better offer services to the College’s students. Others say that more money is not the answer to the Counseling Centers problems and that there is an undefined, larger issue at play.

A Counseling Center employee, who wished to remain anonymous, said the facility’s problem lies, not in the amount of money and financing it receives, but in the utilization of resources.

“The reality is [that] we’re pretty well staffed and I think when you put all of those things together [overuse of unlicensed staff over licensed staff] and you look back at the student group that has been wanting to donate funding to us, it’s almost — the words that are coming to mind are ‘nauseating,’ ‘sickening’ — to think that we would put out a message like that and ask the students to contribute to us as if we’re in distress, and the reality is that we’re not managing our own shop very well and we’re doing it in a way that I think is not respectful to the students and actually puts people at risk,” the source said.

The Counseling Center’s operating budget primarily goes toward salaries, since the center’s fundamental offerings are person-to-person appointments. When asked about if reconfiguring the Counseling Center staff could better utilize funds, Mann said that increasing personnel is an option, as the student population continues to grow, but that it would be a gradual move if undertaken.

While the Counseling Center’s website contains a link for donations, it does not actively solicit them. Crace also provides a list of health and wellness needs to the Department of Advancement for their use as they speak with alumni, parents and others who may be interested in donating to these groups.

The Counseling Center is an auxiliary-based organization, funded through the health services fee students pay with their tuition and by private donations. Student fees are expected to rise to fund the new services the center plans to offer, Crace said. However, restructuring has created a more integrative health fee and the escalation in donations to the center will help limit the increase.

Tomorrow, students, administrators and other members of the College community will meet in the Sadler Center for an “Open Conversation about Mental Health and Suicide Prevention” on campus. The event is at 5 p.m. in Chesapeake B/C and will cover mental health, suicide and how to help those in need on campus.