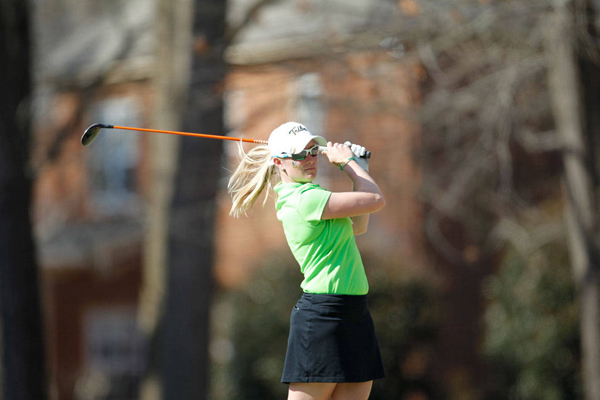 William and Mary traveled to the St. James Plantation Resort in Southport, N.C., over the weekend to compete in the 13th Annual Colonial Athletic Association Women’s Championship. After three rounds, the Tribe finished in fifth with a 58-over 922 team score, far below qualification for what could have been the program’s first National Collegiate Athletic Association Championships berth.

The College opened the tournament with a 19-over 307 in Friday’s round, placing it in fifth on the team leaderboard. Leading the field of eight was Elon, the CAA’s newest member. The Phoenix held a 7-over 295 after the first round, a 12-stroke advantage on the Tribe.

Individually, junior Alessandra Liu led the College with a 72, matching the par of the course. The performance tied her for third place with UNC-Wilmington’s Mallory Warwick. The Tribe had two other golfers in the top 20 – seniors Anna McMullen and Kelly Okun. McMullen was tied at 11th at 76 (+4) while Okun was tied at 18th at 78 (+6). Senior Kellie Edelblut and her sister, freshman Katie Edelblut, rounded out the first day’s performance with respective 9-over and 10-over finishes for ties in 28th and 31st.

In Saturday’s second round, the College scored another score of 307 for a two-day total of 614 (+38). The score moved the Tribe up to fourth place. After two days, the College of Charleston took the lead with a 16-over 592, one stroke ahead of Elon and 22 strokes ahead of the Tribe.

The final round of competition Sunday would be the final round of the Tribe’s season, as they finished fifth; qualification for NCAA’s requires a CAA title. The College shot a 20-over 308 for the third round for a total tournament score of 922 (+58). Charleston took the team title for the second consecutive year with a 17-over 881, while the individual title went to Delaware’s Andrea Slane with a record-setting 7-under 209.

Okun, Kellie Edelblut and McMullen all end their careers with this event, leaving their legacy with respective 10th, 11th and 16th school-best all time average stroke per round. The returning members of the Tribe will start competition again in the fall.