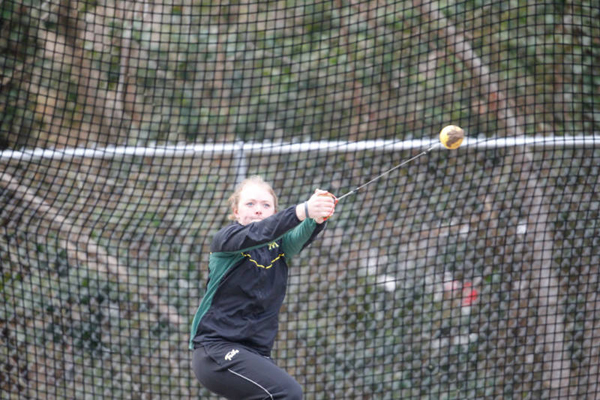 William and Mary had a packed schedule over the weekend as it competed in three meets.

First on the docket was the Mt. SAC Relays, held in Walnut, Calif. from Thursday through Saturday. The Tribe only sent a few of its female competitors and no men to the prestigious event. Junior Emily Stites and Senior Dylan Hassett both earned entries into the National Collegiate Athletic Association Semifinals for the 5,000-meter run with times of 15:53.81 and 16:10.32, respectively. Stites took 14th in the invitational heat while Hassett finished second in the open heat, earning a lifetime best.

The bulk of the team headed to Christopher Newport to take part in the New Captain’s Challenge, while a few members of the team traveled to Charlottesville, Va., for the Virginia Challenge.

At the Virginia Challenge, the men’s team received a tremendous effort from junior Taylor Frenia. Frenia started off strong, shattering the College’s outdoor shot put record as he put the shot 16.99 meters. The previous record of 16.94 meters was set by Drexell George ’78 in 1976.  Frenia went on to break the all-time record in the finals with a final put of 17.66 meters, requalifying him for the Intercollegiate Association of Amateur Athletes of America Championships.

Not to be outdone, the women’s team also had standout performances at the Virginia Challenge. The Tribe’s strongest performance came from freshman Leia Mistowski. On her second hammer throw, Mistowski threw 54.59 meters, destroying the school record of 53.46 meters. Later in the event, Mistowski shattered her newly-earned record with a throw of 55.52 meters.. The performance earned her an invitation to the USA Junior Championships this summer.

Junior Katie Johnston also earned herself an invitation to the Eastern Conference Athletic Conference Championships with her performance in the javelin at the Virginia Challenge.

At the New Captain’s Classic, the women won six events. Senior Nina Ullom took first in pole vault with a 3.50-meter clearance. In hurdles, senior Brittany Biagi won the 400-meter race in 1:04.31 while freshman Jessica Destry won the 100-meter race in 15.40 seconds. On distance and relays, the Tribe had another three wins in Newport News. Junior Leanna Eisenman won the 5,000-meter run in 18:36.88, while the College’s 4×100-meter and 4×400-meter relay teams both were victorious.

The men’s team saw equally impressive performances at CNU from freshman Davion Hutt as well as sophomores Paul Gates and Alex Hedrick. Hutt took second in the 100-meter dash in 10.86 seconds, while Gates won the 3,000-meter run and Hedrick won the pole vault. Gates finished in 9:15.63, while Hedrick cleared 4.50 meters. Sophomore Troy Sevachko won the 400-meter dash with a time of 49.84.

The Tribe travels to Philadelphia to compete in the 121st Annual Penn Relays Thursday through Saturday.