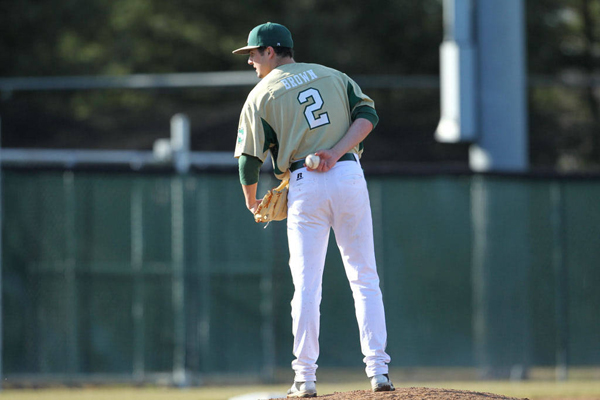 William and Mary put on an offensive clinic at Plumeri Park over the weekend, sweeping Colonial Athletic Association opponent James Madison 17-7, 10-3 and 9-5 to put itself three games above .500 in the CAA standings.

The Tribe (18-19, 9-6 CAA) fell behind Friday in the top of the second thanks to an RBI single by the Dukes’ (12-24, 2-13 CAA) Bobby San Martin. However the College quickly tied the game up again in the bottom of inning, as sophomore designated hitter Ryder Miconi’s two-out single scored junior center fielder Josh Smith from third.

In the bottom of the third, the Tribe bats exploded for eight runs to take an insurmountable lead. With one out and runners on second and third, senior left fielder Devin White drove in a run with a sacrifice fly. After two walks loaded the bases, senior third baseman Willie Shaw smacked a two-RBI single to left field. Following a pitching change, Miconi greeted Brandon Withers with an RBI single to left field, followed by freshman second baseman Cullen Large’s run-scoring single to center. After junior catcher Ryan Hissey was hit by a pitch to load the bases again, junior first baseman Charley Gould plated a run with an infield single, after which sophomore shortstop Tim Hoehn’s two-run single put the College ahead 9-1.

“I liked the way we scored our runs,” head coach Brian Murphy told Tribe Athletics. “It wasn’t just a couple big home runs … but it was a bunch of really good at-bats which was good to see.”

The College never looked back, continuing to score runs as the Dukes failed to mount a sufficient resistance. Overall the Tribe pounded out 17 runs on 20 hits, compared to James Madison’s seven runs on seven hits. Gould, White and Shaw each finished with three runs batted in, as each starter crossed the plate at least once.

“I liked the way we scored our runs,” head coach Brian Murphy told Tribe Athletics. “It wasn’t just a couple big home runs … but it was a bunch of really good at-bats which was good to see.”

The College’s offensive success continued Saturday, as the team recorded a double-digit run total for the second straight game, scoring 10 runs on 15 hits. But the real story of the affair was sophomore right-handed starting pitcher Nick Brown, who tossed his first career complete game.

After a shaky two-run second inning, Brown settled in, mowing through the James Madison lineup with six straight outs in the third and fourth innings, beginning a stretch that saw him retire 17 of 18 Dukes from the third inning to the eighth. The Tribe bats responded to their pitcher’s impressive display, scoring at least a run in each inning from after the second. Devin White, who batted in three runs on three hits, including a long solo homer in the fourth, commented on Brown’s performance.

“I think a lot [of the momentum] came from Nick Brown on the mound,” White said. “He gave up a couple early, but he turned around and pitched a complete game. He works really quick, and that’s a blast to play behind.”

With the College ahead 10-2, Brown came out for the ninth and walked the first two batters. After a fly out and a fielder’s choice, the Dukes’ Kyle Weston singled to bring home a run, but Brown was able to end the rally and earn the complete game win by getting JMU’s Josh Wyatt to fly out.

Brown finished his fifth win of the year with three strikeouts, allowing three runs on six hits and two walks. Colton Harlow took the loss for the Dukes, allowing eight runs, seven earned, on 10 hits in four innings of relief.

The Dukes opened the scoring again Sunday, plating one in the top of the first. However, the Tribe bats erupted for seven runs in the bottom half to put themselves in good position to complete the sweep. With the bases loaded and no outs, Hoehn stroked a two-run single to center field, followed by RBI singles from Smith, freshman outfielder Ryan Hall and Shaw. Hall came home later in the inning on an RBI groundout off the bat of Large, while Shaw scored on an error.

The College added runs in the second and third to increase their lead to 9-1. The Dukes scratched at the lead in the middle innings, scoring one in the fourth and two in the sixth, but failed to make more of their chances. An error by Hoehn brought home another run in the ninth to pull James Madison within four, but junior right-hander Joseph Gaouette struck out the next batter to complete the sweep.

Junior right-handed starting pitcher Aaron Fernandez gave up four runs, two of which were earned, in five and two-thirds to record his third win of the season. Shifflett accepted the loss for the Dukes, allowing seven runs, six earned, on seven hits and a walk in two-thirds of an inning.

“We were certainly pleased with how we played this weekend,” Murphy told Tribe Athletics. “We did a good job of commanding the strike zone [on offense], we did a good job of swinging at the right types of pitches … From the pitching end, we got three solid starts. That’s where you begin, and that gives you the best chance to set the rest of your pitching staff up to be successful.”

The Tribe travels to Lexington, Va., for a game against Virginia Military Institute Tuesday. First pitch is set for 6 p.m.