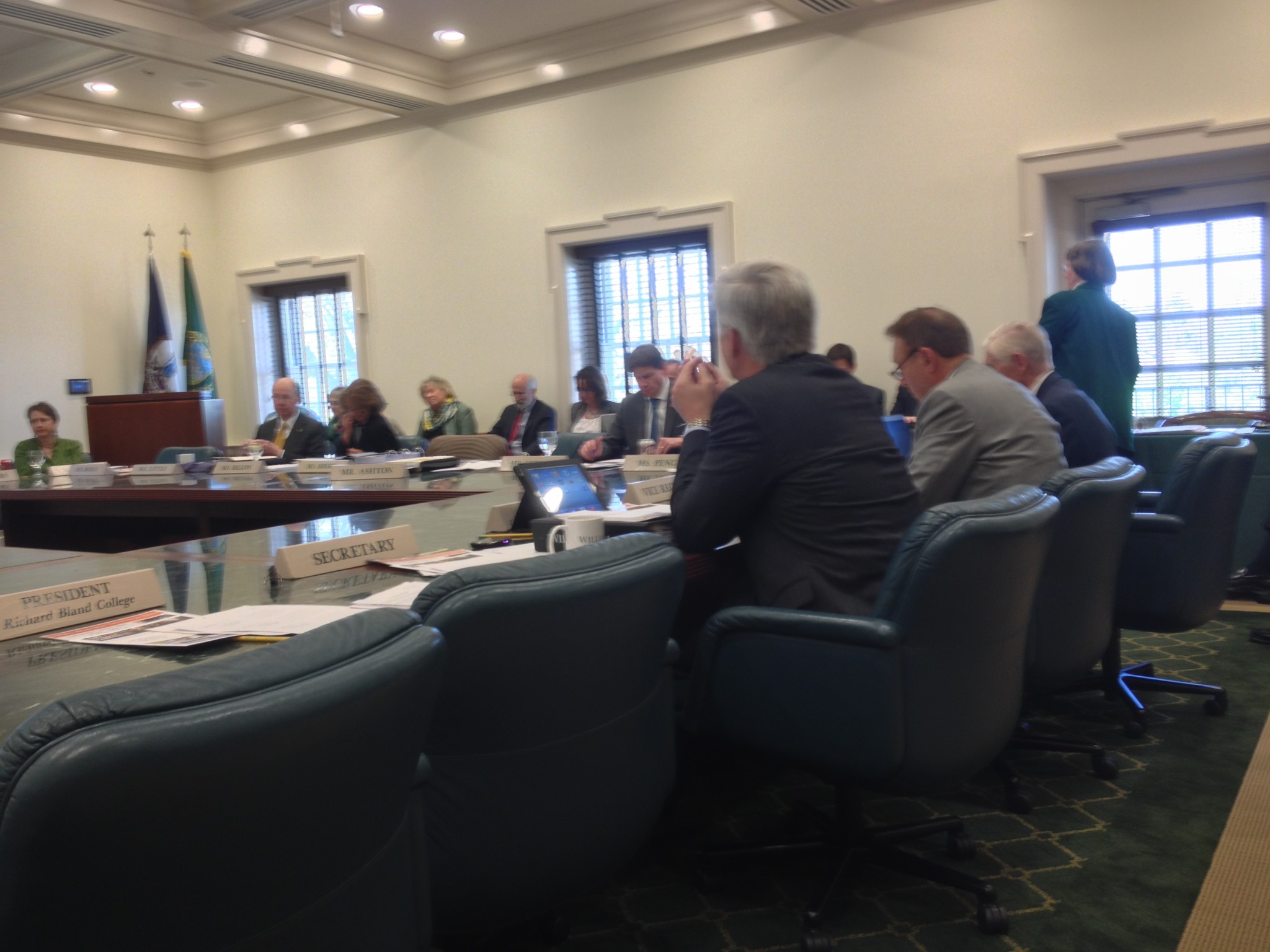 Deviating from its scheduled agenda, yesterday’s Board of Visitors’ Committee on Student Affairs meeting provided an open question and answer session for committee members to ask questions about the College of William and Mary Counseling Center, mental health and suicide on campus.

One of the first questions came from BOV member John Charles Thomas, who asked whether the Counseling Center feels that it needs staff members.

“I am very much a person of balance, so those questions to me aren’t simple yes or no questions,” Mann said in response. “The question we can discuss today is: I have staff, what do you want the William and Mary Counseling Center to be able to do for our students?”

When J. Thomas asked what it would take to provide 24-hour service, Mann responded that it is not necessarily solely a question of staffing and that other resources such as ProtoCall, an outsourced counseling phone service that the center included in next year’s budget, can help provide 24-hour counseling services Currently, the only 24-hour service on campus is the Campus Police, who will forward urgent or emergent situations to an on-call Counseling Center staff member.

BOV members also asked where the College’s Counseling Center sits nationally and whether certain aspects of the center are atypical.

“If you look at our standards compared to nationally, what they do is they calculate a provider-to-student ratio,” Crace said. “Nationally and compared to our peer institutions, we are very favorable – we’re actually enviable — and what we have to spend a lot of time telling our peer institutions is: That doesn’t matter. The demand is what the demand is. We have a high demand for services, and so it’s about being able to provide that demand in as optimal a way as we can, knowing that demand will always exceed resources.”

“We have a generation of wonderful young adults where resilience is an issue,” Crace said. “They have the highest fear of failure than any other previous generation, and it’s because they care deeply. When they come here, their ability to manage what they are so serious about and what they care about has only been taught in one of two ways: either manage that stress through your perfectionism or your procrastination. … That’s all they know, because it’s what’s neurologically natural. And they are less resilient as a result.”

Crace described the College’s resilience training programs, in which 2,800 people participated within the first three months. The programs are designed to help students cope with various campus experiences and teach them how to operate in stressful situations based on eight dimensions of wellness.

“If we build a more resilient generation of young adults, they can continue to care because the alternative is what’s so dangerous: ‘If I don’t know how to build that resilience and my perfection or procrastination unravel, the only place I have to go is to stop caring – apathy.’ And that’s the depressive apathy that occurs; that’s what we have to avoid,” Crace said. “By [avoiding depressive apathy], that demand on the Counseling Center becomes more genuine, more authentic, and that we can manage.”

Crace also described national changes to the counseling services industry. In 2003, the College and other institutions saw a 40 percent increase in the demand for services that never decreased, as increased access to mental health medications allowed more students to come to campus because medications gave them the ability to operate more easily with their mental health conditions. After the Virginia Tech shooting, Crace said, another 15-20 percent spike occurred, and the level of demand for services has not fallen since.

“With Virginia Tech and the tragedy that happened there, there became this immediate response and demand that we become perfectly predictive and perfectly protective, and we will fail at that,” Crace said.

Thomas referenced post-facto responses by Virginia Tech administrators and staff after the 2007 shooting and asked about feelings of constraint within the Counseling Center and administration regarding reporting students they are concerned about. M. Thomas described the College’s Care Reports, which allow students — most often resident assistants — and faculty to confidentially report mental health concerns they have with individual students. These go to Care Support Services and the Care Team, who meet every week to triage students who are at risk and reach out to those of most concern.

When asked about the best-practice model for counseling centers, Crace said the College’s Counseling Center psychological mental health model is considered the industry’s best practice. In this model, staff members meet with students and develop a mental health treatment plan, and students are then assigned to a staff member accordingly. Because the College is a brief-therapy model by demand – not by desire — Crace said that students whose care extends beyond the center’s scope of services meet with the center’s mental health services coordinator, Christine Ferguson, and are referred to better-fitting off-campus services. According to a breakdown of Counseling Center clinical services appointments obtained by The Flat Hat, Ferguson scheduled appointments with 193 individual students from the beginning of the academic year through March 4.

The committee asked the students present at the meeting about how students view the Counseling Center and mental health on campus.

“[I’m seeing] this ongoing dialogue about resources, so the conversation that the Counseling Center is not providing, not providing, not providing,” Brew said. “This has been ongoing. … But what I’m seeing … is that students here definitely have that vulnerability issue that is very pervasive in our culture today. So, for a student that is going to counseling and has had some success with counseling, they don’t necessarily want to bring that up because that makes them more vulnerable. But if you have a student that is going to counseling and is dissatisfied, they’re more likely to bring up [their dissatisfaction].”

BOV member Kendrick F. Ashton, Jr., ’98 asked about the truth behind “One Tribe, One Family.”

“So we’re one tribe, one community. We love each other. We articulate that well and I think that comes across very genuinely, very clearly, in our branding. Do people show up on campus and find that to be a misrepresentation of reality? Is the intensity of the inner Tribe — this one-up-manship around suffering — do those things sort of chip away at this sense that we are a community?”

In response, Brew described the complexity of the College’s competitive atmosphere because the competition is subtle and humble, not bragging, and she feels motivated and inspired by the success of her peers to continue.

“I think we’ve done such a good job of marketing [One Tribe, One Family] that people come in expecting it to be this perfect place, and the reality of life sets in and you realize that things aren’t necessarily perfect. … Just because you say ‘One Tribe, One Family,’ doesn’t mean it’s one perfect family,” Danly said.

Brew and Danly both directed discussion to the response by College administration and faculty after a student suicide, specifically the desire for a unified, consistent message. Brew described the jarring nature of going through her day April 13 after the suicide of Paul Soutter ’17 and having no opportunity for discussing the tragedy in her classes or her on-campus place of employment. Danly and Brew discussed the potential for canceling classes, closing the campus library or encouraging professors to begin class with a moment of silence.

“You create this understanding that a student can take their life and there cannot be a conversation about it, and I think this can be dangerous,” Brew said.