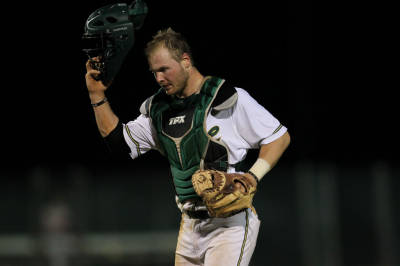 Considering William and Mary’s illustrious past, it’s difficult to find anyone who does something for the first time in College history. However that’s exactly what former Tribe catcher, Ryan Hissey, did the afternoon of Wednesday, June 10 at the Major League Baseball Amateur Draft as he became the first player in school history to be selected by the Toronto Blue Jays.

The Blue Jays chose Hissey in the 14th round with the 422nd overall pick, making him just the 34th Tribe player drafted ever, and the seventh in the past four years. This past season Hissey earned Colonial Athletic Association First-Team honors for the second consecutive year, batting .290 with eight home runs and 29 runs batted in, while throwing out 11 runners from behind the plate.

Hissey ‘15 joined the Blue Jays’ rookie club in the Gulf Coast League and immediately produced at the plate. In 10 games he has posted a .355 batting average, knocking in six runs on 11 hits, including a home run and three doubles. After his strong debut with the rookie club, he earned a promotion to Toronto’s short-season single-A affiliate, the Vancouver Canadians, of the Northwest League. Since his arrival, Hissey has played in four games and is currently batting .313 with three doubles, a walk and three runs scored. With the Blue Jays’ bevy of hitting at the major league level, it is doubtful Hissey will join the big-league club anytime soon, but his recent promotion to A ball is a positive sign nonetheless.

The closest to the majors is Ben Guez ‘08, an outfielder on the Colorado Springs Sky Sox, the AAA affiliate of the Milwaukee Brewers.

While no former Tribe player is currently on an MLB roster, there are several playing in the minor leagues. The closest to the majors is Ben Guez ‘08, an outfielder on the Colorado Springs Sky Sox, the AAA affiliate of the Milwaukee Brewers. Drafted in 2008 by the Detroit Tigers, Guez spent eight years in their minor league system. The Brewers signed him to a minor league contract in December of 2014, assigning him to the Sky Sox soon after. This season Guez has played in 38 games, batting .287 with 6 homers and 19 runs batted in. However, he hasn’t seen the field since May 21, and is presently on the 7-day disabled list

The Detroit Tigers also drafted Matt Davenport ‘12, a right-handed pitcher. In his four years in their system he’s bounced between several different levels, playing on three teams this season alone. He started the year in High-A ball with the Lakeland Flying Tigers, but was demoted to the short-season A Connecticut Tigers after posting a 7.62 earned run average in five games. However, Davenport’s pitching greatly improved with the Tigers, maintaining a 3.52 ERA in seven appearances. He was briefly promoted to the class-A West Michigan Whitecaps, but only pitched for them twice before he was sent back to Connecticut.

Three Tribe baseball players were selected in the 2014 MLB Draft

Three Tribe baseball players were selected in the 2014 MLB Draft, beginning with the St. Louis Cardinals’ pick of Nick Thompson ’14 in the eighth round. After spending all of last season with the Cards’ short-season A affiliate, the State College Spikes, Thompson has progressed to regular-A ball in 2015, rotating between left field, right field and designated hitter for the Peoria Chiefs. In 76 games this season Thompson’s hitting .226 with eight homers and a team-leading 39 RBIs.

The Mets took Michael Katz ‘14 in the ninth round of the 2014 draft. Like Thompson, Katz has advanced to regular A ball after a stint in a short-season league. He began the year with the Brooklyn Cyclones, batting .219 in 10 games. He was then promoted to the Savannah Sand Gnats of the South Atlantic League. In 16 games down in Savannah, Katz is hitting .232 with a home run and eight runs batted in, while playing both first base and designated hitter.

One of Katz’s former Tribe teammates can also be found down in the South Atlantic League. Ryan Lindemuth ‘14was a 37th round selection by the New York Yankees in 2014. In 42 games for the Charleston RiverDogs this season, Lindemuth has put up a nearly identical statline to Katz, batting .230 with a homer and eight RBI. The two played against each other July 17-20, as Katz’ Sand Gnats took three out of four games against Lindemuth and the RiverDogs. Katz collected three hits in the series, scored three runs and found his way to home plate, while Lindemuth managed a walk, a run, and two hits – including a double.

The World Series is slated to begin on October 27,  marking the conclusion of the 2015 MLB season. Former Tribe players have their sights set on 2016 as the year to make the jump from single A ball to the major leagues.