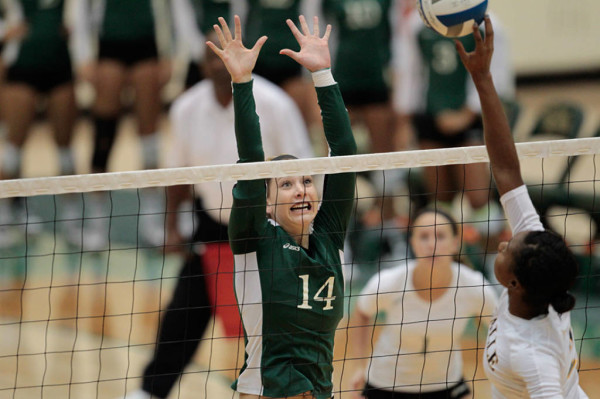 William and Mary had a busy weekend: the Tribe faced off against Cornell, Army and Iona at the Army Invitational. After losing to Cornell and Army and winning against Iona, the Tribe’s record stands at 3-4.

On Saturday, the Tribe took on Cornell for the first time since 1993. After winning 3-2 against the Tribe, Cornell now holds a 3-1 all-time record against the College.

The first set against Cornell went well for the Tribe; it hit 0.647. The College also made 11 kills and zero errors. Though the second set was rough, the Tribe hit 0.357 in the third and made 16 kills.

Sophomore Paige Humphrey contributed seven kills and seven blocks. Junior Michelle Heath made five kills and one ace; her nine digs bring her to a career total of over 300. Senior Dessi Koleva made five kills, one ace, four blocks and 18 digs. Sophomore Sara Zumbach contributed 20 digs, the most on the team for this match. Junior Gabrielle Pe made 19 assists, and freshman Katie Kemp contributed another 21.

Army won its first-ever meeting against the Tribe 3-2 Saturday, improving its season record to 3-2.

Army won its first-ever meeting against the Tribe 3-2 Saturday, improving its season record to 3-2.

During the match, Koleva made 10 digs, surpassing the 1,000-mark for individual career digs. She is the eighth player in Tribe history to reach this milestone. Koleva also made three aces, a personal best for a single match.

Sophomore Austyn Ames saw court time for the first time this year, making three aces, seven digs and 18 assists. For the second match in a row, Zumbach led the team in digs with 12. Senior Caroline Albright made eight assists, seven digs and one ace.

Sunday morning, the Tribe pushed its all-time record against Iona to an impressive 2-0 after winning 3-0. With the College’s victory, Iona sank to 2-5.

Pippus continued to shine in her debut season, making three aces, seven digs, five kills and one block. Her serves and early kills gave the Tribe an early 6-3 lead. The team continued the trend, winning the first set 25-19.

Pippus, Brickerd, Albright and Humphrey contributed significantly during the second set, which the College won 25-13. Brickerd was the stand-out player in the third set, which the Tribe won 25-19.

Koleva added another 10 kills to her career total. Brickerd impressed once again, making seven kills, six digs and two aces. Over the course of the weekend, she made a total of 25 kills and six aces, a team high that earned her a place on the all-tournament team.

Zumbach made an additional 18 digs in the Iona match. Ames, Kemp and Pe all made a number of assists. Albright and sophomore Sydney Biniak each made six kills.

Up next for the College is the Pirate Invitational this weekend in Greensboro, N.C., where the Tribe faces Western Carolina, Hampton and Eastern Carolina over the course of Friday and Saturday.