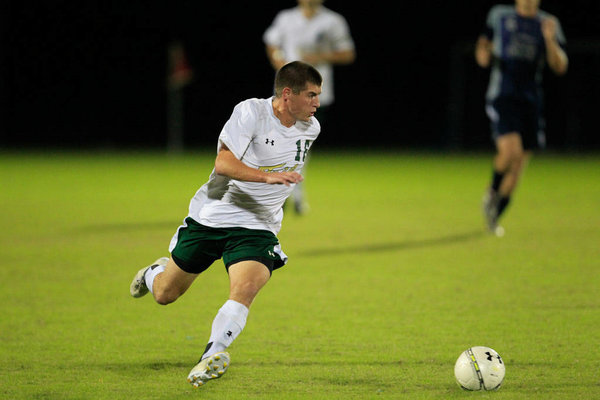 Note: William and Mary is now 1-1-1; this article was written prior to the weekend draw at North Carolina.

As soon as the Tribe took possession at the start of the match, the end result was all but certain. Sophomore forward William Eskay, assisted by junior forward Reilly Maw, made his first of three goals within the first minute of home opener en route to a 4-2 victory against the Liberty Flames at Martin Family Stadium on Tuesday night.

“After our George Mason performance [in the preseason]…we talked about being more aggressive and getting after [the opponents] early and testing the backs and what they were like defensively, which we didn’t do in the Mason game,” head coach Chris Norris said. “Obviously it paid off, we got a goal in the first minute and I think that set the tone of the game.”

During the first half, the Tribe (1-1) surged constantly on offense, keeping the ball on the Liberty side of the field for most of the time.

“The initial plan was to go out and go as hard as possible to make a statement at the first home game, get the fans excited,” Eskay said. “We knew it was a game we could win.”

“The initial plan was to go out and go as hard as possible to make a statement at the first home game, get the fans excited,” Eskay said. “We knew it was a game we could win.”

With the quick tap from Maw to Eskay for the first goal, the Tribe set the pace for a one-sided blowout, making several close shots that all either hit the crossbar or were just wide of the post. Entering the break, the Tribe remained at just a 1-0 advantage and outshot the visiting Flames 9-3.

Not far into the second period, the Tribe began to create scoring plays again. In the 54th minute, junior midfielder Jeff Bombelles passed to Maw, who connected with Eskay, who maneuvered through the Liberty defense for a straight shot to the lower left of the goal for the second goal of the night. Up by a 2-0 margin, the match became increasingly physical for both teams, resulting in a yellow card at 67:28 on Liberty. In the 69th minute, freshman forward Ryder Bell scored the College’s third goal, with the assist credit going to sophomore defender Alfonso Speed, Jr. and senior midfielder Ryan Flesch.

As the Tribe looked to be dominant thus far, the Flames exploited turnovers to make a strong play into Tribe territory. At 73:43, Liberty began a comeback bid as freshman midfidlder John Fuquene received a yellow card, giving the Flames a penalty kick. The kick was successful and the shutout was over, the scoreboard’s glow now showing 3-1 with less than 20 minutes remaining. Capitalizing on further Tribe errors, Liberty once again scored in the 82nd minute off a solid free kick, landing just in front of a sprinting Liberty attacker, who slid into the ball for a one-touch shot on goal.   Despite the Tribe’s 3-2 advantage, the two unanswered goals were concerning and visibly put the Tribe players on edge.

Through the chaotic last 30 minutes, Eskay showed no signs of exhaustion or frustration as he completed his first career hat trick with his third goal and the Tribe’s fourth of the night at 87:54.

“You see three goals, everyone gets excited and you get a lot of the glory, but in fact all my goals were only one or two touches; the creation wasn’t any of my doing,” Eskay said. “It was just good team play and I happened to be in the right spot and was able to finish it.”

The assist once again came from Maw, who assisted on all three of Eskay’s goals. The Tribe ran out the clock after gaining possession again and took the season’s first win 4-2, improving to a 1-1 record.  In the second half, the Tribe outshot the Flames again, this time 8-5 for a total shot comparison of 17-8. Senior keeper Mac Phillips made one save while surrendering the two goals.

I thought our performance was good; it’s fantastic to score four goals, [and] we made it a lot more exciting than we should have,” Norris said.

Despite the three goals scored by Eskay, he and Maw only touched the ball towards the end of the play, as the midfielders had to work the ball up to them. There was obvious teamwork and chemistry on the field despite the rough, foul-ridden second half. Norris commented on parts of game play in which he saw room for improvement.

“I thought our performance was good; it’s fantastic to score four goals, [and] we made it a lot more exciting than we should have,” Norris said. “Unfortunately, I think the goals we conceded were in some ways similar to the goals we conceded at Louisville … largely, turnovers in bad areas, some lack of defensive tracking but mainly turnovers that gave [Liberty] the opportunity to get balls forward.”