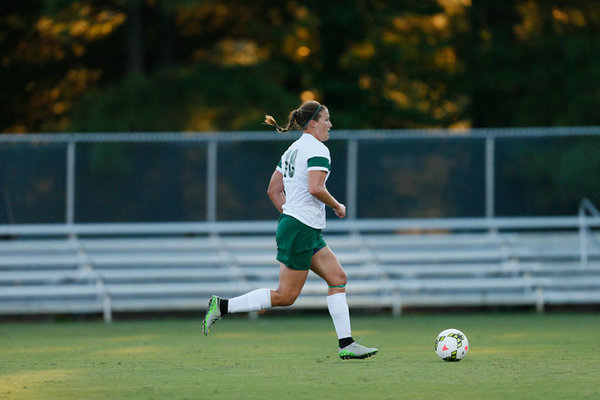 William and Mary put on an impressive display against Atlantic Coast Conference competition this weekend, earning a draw and a win against Wake Forest and North Carolina State, respectively, at the N.C. State Tournament.

The Tribe (4-1-1) started quickly against the Demon Deacons (2-1-2) Friday evening, earning two corner kicks within the first five minutes. The game slowed down considerably after William and Mary’s initial offensive assault, but gradually Wake Forest grew into the match, getting off three shots before the 26-minute mark. With just under a half-hour played, Tribe sophomore back Elysse Branton forced Wake Forest’s keeper, Lindsay Preston, to make the game’s first save, followed soon by junior midfielder Haley Kavanaugh’s attempt that went wide.

Wake Forest broke the deadlock a minute later. The Demon Deacons’ Sarah Teegarden played in teammate Sarah Medina with a nice through ball, who then beat senior goalkeeper Caroline Casey one-on-one after a series of smart dribbles. The Wake Forest lead was short-lived. Preston knocked a clearance off of a teammate, and senior forward Leci Irvin tapped the ball into the open net for her first goal of the season.

Both teams had chances to score before halftime, but neither could take the lead. Preston made saves on shots by senior midfielder Nicole Baxter and sophomore midfielder Adrienne Maday, while Casey kept out a Wake Forest header five seconds before the whistle.

This pattern of missed opportunities continued throughout the second half. Teegarden broke through early for the Demon Deacons, but her attempts were blocked. Baxter unleashed a screamer in the 54th minute that crashed into the crossbar, and minutes later her second try went high. Casey came up clutch with a huge save in the 85th minute, leading to an ultimately fruitless Tribe barrage to close out the period. The College took eight shots in the second half, while the Demon Deacons fired seven, but none found the back of the net.

Both teams kept up the pressure in the overtime sessions, but once again neither could find the breakthrough goal. Junior back Clara Logsdon had her shot saved, while Maday had two chances, which were both stymied by Wake Forest defenders. Casey made a crucial save in the second overtime period, while head coach John Daly was booked for dissent seconds later. The Tribe had a corner kick in the final minute, but Maday’s cross couldn’t find a finishing touch, and the match ended 1-1.

William and Mary found more success Sunday afternoon against tournament host N.C. State. After a sluggish first 20 minutes of play featuring only one shot on goal, Baxter knocked a cross into the box in the 22nd minute. The ball found the head of senior forward Katie Johnston, who directed it past the keeper for her second goal of the year.

After a sluggish first 20 minutes of play featuring only one shot on goal, Baxter knocked a cross into the box in the 22nd minute. The ball found the head of senior forward Katie Johnston, who directed it past the keeper for her second goal of the year.

Johnston and her teammates continued to relentlessly attack the Wolfpack backline. The Tribe took six more shots in the first half after the opening tally, three of which Johnston took herself. In the 33rd minute Baxter once again found Johnston, this time off a corner kick, but a Wolfpack defender cleared the ball off the goal line, and Maday’s follow-up sailed over the crossbar.

The Tribe eventually padded its lead in the 39th minute. Sophomore back Haley Kent sent a long ball up-field which found senior forward Samantha Cordum. Cordum chipped the keeper for her third goal of the season, doubling the Tribe’s lead right before the break.

N.C. State turned up the pressure in the second period. Jackie Stengel fired a shot towards goal in the 51st, which Casey parried away. The rebound found the Wolfpack’s Dayna Tomayko, but Casey denied her attempt with a crucial foot-save. Stengel challenged Casey once again in the 69th, but the senior shot-stopper kept her clean sheet alive with another save. On the night she made four saves, putting her in fourth place all-time in College history.

The Tribe put the match to rest in the 71st, going up 3-0 with under 20 minutes to play. Branton sprinted into the box, laying the ball off to Johnston, who calmly deposited the ball into the top right corner for her brace. The defense held strong, and William and Mary completed its third shutout of the season.