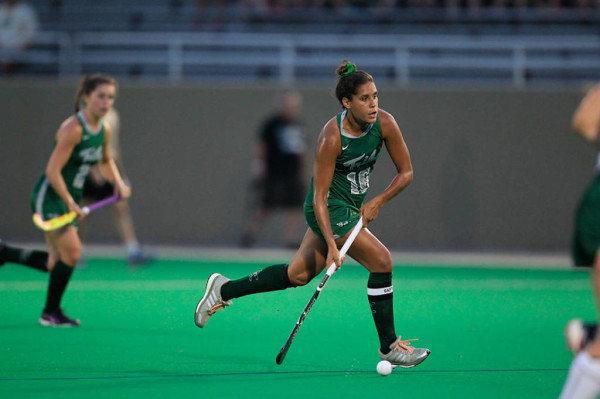 The Tribe (3-3), winners of three straight non-conference matches prior to the weekend, entered Friday night’s contest with plenty of confidence. The defense, having allowed only five goals over its three victories, started off strong once again, as the heavily-favored Lady Monarchs (4-1) failed to get a shot off in the first 10 minutes of play. When the shots did come, the College’s back line stayed stalwart, coming up with several key blocks. Through the opening 24 minutes, senior goalkeeper Meredith Savage only needed to make two saves.

Old Dominion broke the deadlock at 24:03 as Sarah Breen found the back of the net following a penalty corner for her fifth tally of the season. The College’s offense could not find momentum, creating no scoring chances in the first half compared to the Lady Monarchs’ eight shots and seven penalty corners. William and Mary prevented any further damage in the period, coming up with another block little over a minute before the halftime whistle.

The second half provided more fireworks than the first, as the Tribe quickly earned a penalty corner in the early minutes. Sophomore midfielder Erin Menges delivered the ball, but neither senior defender Peyton Smith nor senior forward Pippin Saunders could put a shot on frame. ODU soon capitalized, as Danielle Grega forced a Savage save before steering the rebound home to put the Lady Monarchs up 2-0.

After Grega’s goal, the floodgates opened as the Lady Monarchs continued to pressure the College defense and continued to score. In total, ODU took 11 shots in the second half, scoring four goals. Breen netted twice in the span of six minutes, completing her hat trick in the 58th minute and putting the Tribe at a 5-0 deficit.

Junior midfielder Amanda McAteer opened the Tribe’s account from the penalty spot in the 65th minute, her first goal of 2015.

The College continued to fight, scoring twice before the end of the match. Junior midfielder Amanda McAteer opened the Tribe’s account from the penalty spot in the 65th minute, her first goal of 2015. Less than three minutes later, Saunders fired a shot toward goal that deflected off sophomore midfielder Emma MacLeod and into the net. Saunders collected her 21st career assist on the play, tying her for second all-time in William and Mary history. It was too little too late, and the Tribe’s win streak ended at three as ODU took the win 5-2.

Unlike the Lady Monarchs, the Blue Devils (4-2) took almost no time to jump ahead of the Tribe Sunday afternoon, as Robin Blazing received the ball on the back post and fired it past Savage after only two minutes and 10 seconds. Nevertheless, the College responded, as Saunders buried her team-leading sixth goal of the season with a backhand shot in the 19th minute.

Duke regained the lead three minutes later. Following a defensive save from Menges off a Blue Devil penalty corner, Ashley Kristen fed Heather Morris from the back post, who deposited the ball in the roof of the net. While the Tribe was outshot in the first half 9-3, it entered the locker room only down 2-1 on the scoreboard.

The Tribe called a timeout in the 60th minute, but the stoppage in play made no difference as the Blue Devils’ Rose Tynan scored twice in the next five minutes to give Duke an insurmountable 6-1 lead.

The first 20 minutes of the second period featured a total of 10 shots, but no goals scored. The College took six shots in that 20-minute span, but Duke goalkeeper Lauren Blazing ensured her team stayed in the lead with three crucial saves. The Blue Devils finally increased their advantage 56 minutes in as Morris beat Savage once again with a hard reverse.

Morris completed her hat trick nearly a minute later, knocking in her third goal following a penalty corner to put Duke ahead 4-1. The Tribe called a timeout in the 60th minute, but the stoppage in play made no difference as the Blue Devils’ Rose Tynan scored twice in the next five minutes to give Duke an insurmountable 6-1 lead. After a flurry of substitutions in the final minutes, junior forward Samantha Slattery scored her first collegiate goal from the penalty spot in the 68th to cut the deficit to four before the match came to an end with 6-2 as the final score.

William and Mary returns home to Busch Field Friday to take on New Hampshire. The game is slated for a 6 p.m. start.