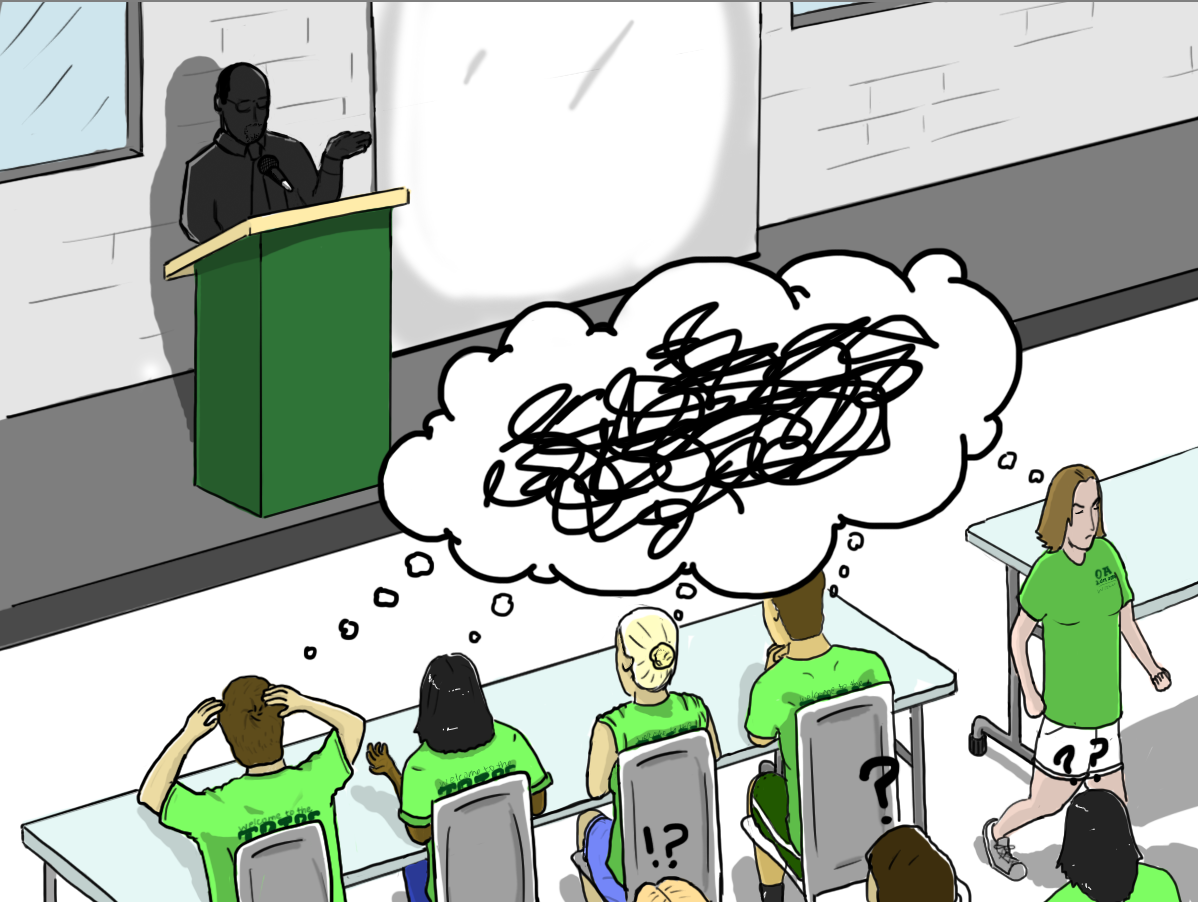 Associate Dean of Students Dave Gilbert apologized for his remarks regarding sexual assault and consent during Orientation Aide training Aug. 19 and 20.

OA Annabel Hess ’16 said that Gilbert focused on alcohol’s role in sexual assaults when discussing sexual misconduct and primarily used examples where alcohol was a factor in the assault.

Gilbert incentivized students to answer questions about the presentation by tossing out candy to volunteers. According to OA Yazdi Doshi ’16, Gilbert also selected students from the crowd to use as examples.

An OA who wished to remain anonymous said Gilbert’s overall tone during this presentation did not convey the seriousness of the topics that he was discussing.

“From the very beginning of him speaking, it was a very off-beat tone,” the anonymous source said. “He was very cavalier, a word that a lot of people used, and also blasé was a pretty good way to understand that he was trying to use humor and trying to make sexual assault a funny joke as a way to make it more approachable for students.”

“I certainly was misunderstood,” Gilbert said. “For that, I bear the responsibility …we deal with a lot of difficult issues in our jobs.”

Hess recalled Orientation Aide Directors apologizing for Gilbert’s conduct following that seminar. Doshi said that the presentation was the topic of conversation in the staff meetings he attended.

“Everyone was just really upset with how he displayed it,” Doshi said. “Then we had our staff meetings. We mulled about it. That whole day was thrown off because everyone was just so upset.”

The next day, Gilbert attempted to clarify his presentation in response to feedback from the OAs who had attended the first seminar. A video of this session was submitted anonymously to The Flat Hat. Gilbert began with an apology for his remarks the previous day.

“I certainly was misunderstood,” Gilbert said. “For that, I bear the responsibility … we deal with a lot of difficult issues in our jobs. One of the ways that I’ve tried to approach remaining balanced is humor. Now of course there is a time and place for humor. Humor does not have a place in the middle of a student conduct hearing. Inarguably, maybe humor should not have happened yesterday. … Where I am truly remorseful is that it diluted my messaging and, even worse, it gave a false sense of what I was trying to convey to you. Most regrettably, it gave some of you the impression that I was less caring than I am trying to present myself as. Please accept my apology for that.”

Gilbert then opened up the floor to the OAs who had questions or wanted him to further explain his remarks.

Several asked Gilbert to explain concepts from his presentation the previous day. He answered their questions and elaborated on those thoughts that he said he believed were misunderstood based on the feedback received.

One OA commented on Gilbert’s sole use of female pronouns when describing a sexual assault survivor and male pronouns for the student accused in every example he provided. Gilbert responded by stating that he regretted his language and thanked the OA for sharing. Hess shared the same concerns.

“Ultimately it spiraled into a conversation about how his language was wrong,” she said. “People were really offended that he used only female pronouns … He was completely disregarding anyone that wasn’t heterosexual.”

Another OA commented on Gilbert’s remark the previous day where he called the perpetrator a good person who made a bad decision, and said that she felt that remark undermined every survivor’s experience.

“I think personally for me, it was hard to sit there and know that this is a person with so much power, in a high position, and is in charge of conduct, something this school takes so seriously, and to know that he was, for lack of better words, clueless,” Hess said.

“There are students who make choices or don’t have tools, that end up hurting people in a real way. I’m not trying to diminish that hurt, but I think there are places where we can have some influence teaching through our example and through our conversation that can lead to fewer victims,” Gilbert said. “That’s what I was trying to say.”

Additionally, OAs asked Gilbert several questions about his warning to not drink from a hypothetical punch bowl — an analogy for drinking an unknown amount of alcohol. Gilbert addressed these questions with an analogy.

“The analogy is if I leave a wallet and walk out of the room, if it’s taken, it’s not my fault,” Gilbert said. “The person who took it made a conscious decision and committed a crime. But it also creates a reason to say if I didn’t choose to leave my wallet there, then that’s a risk that happened. That doesn’t mean it’s my fault. That doesn’t mean that I invited it.”

Additionally, Gilbert continued to stress alcohol’s role in many of the sexual assault cases with which he has dealt as an associate dean of students.

“Alcohol is usually, if not always, a factor,” Gilbert said. “As a practitioner, we’ve been addressing the alcohol issue, as well as the issues of consent and what it is, and teaching skills to minimize the overall instance of rape. I will do that. We have to figure out a good way to do that.”

Hess said that while Gilbert made those remarks, OAs, including herself, began to leave the room. Doshi estimated that two or three left with every response made by Gilbert. A member of the First Year Experience staff stopped the session.

“I think personally for me, it was hard to sit there and know that this is a person with so much power, in a high position, and is in charge of conduct, something this school takes so seriously, and to know that he was, for lack of better words, clueless,” Hess said.“He wasn’t listening to the feedback that we were giving him, he was just trying to rephrase it in a way that made him sound more intelligent.”

Gilbert provided the Flat Hat with a statement about the presentation.

“Following a recent presentation to the Orientation Aid group, I became aware that some of the members of the group were upset by it,” Gilbert said in an email. “As a person who is deeply committed to creating and maintaining a safe and affirming community for students for over a decade at the College, I deeply regret that the presentation impacted students in this way. I am especially sorry for the reaction it caused for students who are survivors. It was never my intention to cause those in attendance any distress, and I have spoken with several students and staff who attended the presentation to receive their feedback. … I understand that we must always be mindful of how we talk about this critical issue, and I plan to do everything I can to strengthen trust with students going forward.”

Senior Associate Vice President for Communications Brian Whitson said that the administration has been responding to students who contacted them because of Gilbert’s presentation.

“We heard from students who had concerns about an orientation aide training program, and we have been responding to those concerns,” Whitson said in an email. “William & Mary is committed to preventing sexual violence. This is such an important topic for this campus. It certainly concerns us to hear students were impacted in this way by information presented in a session that was meant to educate and inform. Our follow up is continuing.”