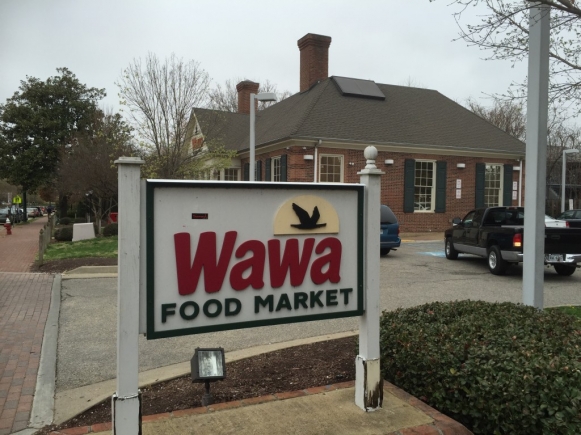 It is the end of a long Friday night. Every girl’s crop-top is plastered to her back from that special type of sweat that can only be produced in a frat house packed with enough people to give the fire marshal a heart attack. Your eardrums and your liver have both taken a few hits. But you don’t mind because someone has just proposed the most brilliant idea in the history of all mankind. This paradigm-shifting move, more revolutionary than the discovery of penicillin, is a late-night food run.

After tripping over the treacherously shadowed and seemingly-endless brink path, a golden glow appears in the distance. It beckons you to the promised land: Wawa. In this magical place exists a cornucopia of choices. Better still, you get to leisurely stroll like an all-powerful Roman emperor around until something suits your fancy. Even more enticing than the hoagies is the nightlife at Wawa. As in the Cinderella story, when the clock strikes 12, Wawa morphs into the after-party for all of campus. All walks of life congregate to seek late-night nourishment after a successful round of debauchery. You could practically spend hours catching up with friends while perusing the chip aisle.

As in the Cinderella story, when the clock strikes 12, Wawa morphs into the after-party for all of campus.

There is one catch in this system, however. Wawa is a convenience store, not a mall or a day-care. Those slightly blurry figures who make the heavenly sandwiches and collect your money are actual, real-life people. They have feelings too. The store can get very crowded by individuals who are momentarily beside themselves, causing a lot of extra stress for these poor employees. Plus, it gets very chaotic. The late-night line on weekends is less organized then a freshman’s first term paper. Three people sit on the coffee counter, there are two people flirting over energy drinks and you find yourself hypnotized by the milkshake machine for at least three minutes. Managing the store would be difficult with such a profound amount of foot traffic, even if half of the customers were not also in need of some hand-holding. Yet, the draw of Wawa is this ability to hang out and really savor the decision-making process.

Luckily, there is a way to reconcile the basic decencies that should be bestowed upon the employees of this fine establishment while still having a fun time. Not shouting at the top of your lungs can be hard when you are plastered, but try to practice some basic etiquette. Aim for a having a general time limit in the store. If it is taking more than 10 minutes to make a decision, it is probably time to leave and find your bed. The process can be streamlined some if you try to narrow down your decision to just a few possibilities while trekking to the store. Also, when waiting in the mass of bodies that can barely be considered a line, get your money ready for the cashier.  When an enthralling conversation springs up, kindly excuse yourself in order to finish your purchase, then move your talk outside. Most importantly, watch your friends. In this case, peer-pressure is actually encouraged. Let them know it is not cool to be rude to other human beings. Make judgement calls about who may be unfit to go inside and instead let them hang outside while you buy them something. You shouldn’t have to literally hold someone up so they can order a hoagie.

Wawa is a classy store with food that seems fresher than the dining halls: treat it with class.

All of these are general guidelines. It really comes down to just trying to be a little more considerate. Wawa is a classy store with food that seems fresher than the dining halls: treat it with class.  We all gotta have our Wawa, but keep in mind that the people who are behind the counter have to be at Wawa for an eight-hour shift.

Emily Gardener is a Confusion Corner columnist who always brings her best manners to Wawa.