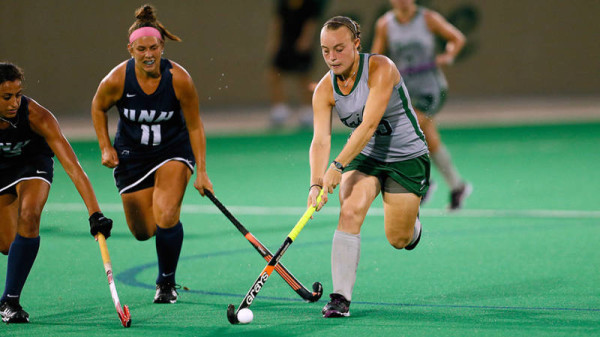 Shutouts proved a common theme for William and Mary in its first two Colonial Athletic Association matchups — No. 13 Delaware blanked the Tribe 4-0 Friday, while the College shut out Towson 2-0 Sunday.

No. 13 Delaware (10-2, 1-1 CAA) proved a hard challenge for the visiting Tribe (5-7, 1-1 CAA) as the reigning CAA champion Blue Hens fired the first shot at 6 minutes, 19 seconds. Senior goalkeeper Meredith Savage made the save to prevent an early deficit. The Blue Hens’ offensive opportunities continued throughout the first period as Delaware outshot the College 7-1. The Tribe’s lone shot came from senior forward Pippin Saunders in the 26th minute, but it was blocked by the back line.

Nearly a half hour into the game, Delaware forward Meghan Winesett put the hosts on the scoreboard with an unassisted shot from the left to the top of the net at 29:51. A minute later, at 30:42, the Blue Hens struck again as Delaware midfielder Michaela Patzner approached from the right and fired from 15 yards out, squeezing the ball right past Savage.

With 26 seconds to go in the contest, Delaware put the nail in the College’s coffin with another goal, this time by Delaware midfielder Esmee Peet just after her previous shot was blocked two seconds prior.

After the break, the College kept pressure on the ball, preventing Delaware from creating scoring opportunities for the first 20 minutes of the second half. Savage and the back line rejected several shots from scoring as the Blue Hens provided a constant barrage on the Tribe side of play. At 56:47, Delaware midfielder Greta Nauck scored the team’s third goal from five yards out, the shot sailing over Savage’s head. The Tribe would persevere for a close shot at 58:53 by sophomore midfielder Emma MacLeod, but it was saved by the defense. With 26 seconds to go in the contest, Delaware put the nail in the College’s coffin with another goal, this time by Delaware midfielder Esmee Peet just after her previous shot was blocked two seconds prior. The game ended with the Tribe shut out 4-0 and outshot 15-3 against the CAA-favorite Blue Hens. Savage made seven saves in the loss. It was the third consecutive shutout loss for the College after the home losses against Richmond and Davidson last week and the fourth consecutive loss.

The defeat also marked the College’s fourth loss to a nationally-ranked opponent. Since none of the teams left on the schedule are currently in the NCAA Top 25, the Tribe appears to have no remaining opportunities to improve the 0-4 record against ranked opponents.

The Tribe’s luck changed as it became the team forcing the shutout Sunday afternoon at Towson.

The Tigers (2-10, 0-2 CAA) were not as swift on offense as the Blue Hens, allowing the Tribe to take possession and make several attempts on the net early. Saunders fired the first shot of the game at 4:09, only for it to be saved by Towson keeper Emilee Woodall. Junior forward Maria Jose Pastor fired another shot six seconds later, which was saved by the Tigers defense. The two teams would proceed to exchange shots for much of the first half before sophomore forward Cammie Lloyd scored on a penalty stroke for the 1-0 lead at 24:49. The match entered the break with no further scoring.

With the two penalty stroke goals, the College now has made four this season, which ranks in the top 3 for most in program history behind nine in 1995 and seven in 1993.

In the second period, junior midfielder Amanda McAteer scored the second and final goal of the game at 51:21, also off a penalty stroke like Lloyd’s goal. With the two penalty stroke goals, the College now has made four this season, which ranks in the top 3 for most in program history behind nine in 1995 and seven in 1993.

The Tribe stayed on top of the ball from both offense and defense, and time expired with the 2-0 shutout victory. Not only did it snap a four-game losing streak, but it was the first time the College allowed no goals in a contest since Oct. 26, 2014 when the College prevailed in a 2-0 home victory over CAA foe Drexel. Savage recorded no saves because the Tigers never got close enough to take any accurate shots. Overall, the Tribe outshot Towson 15-2 in a dominating performance.