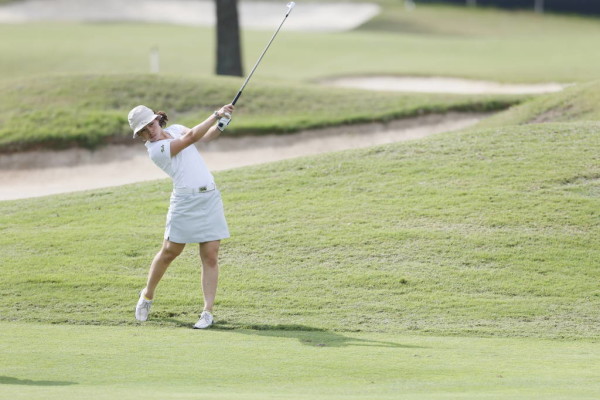 The Tribe was once again led by senior Alessandra Liu, who shot a 1-over 217 in the tournament, which was the top score on the individual leaderboard by three strokes. Liu set the pace early, the only golfer of the field of 90 to finish the first day under par at the completion of the first two rounds. She made par with 72 in the first round followed by a second round score of 70 (-2) Monday, putting her five strokes ahead of the closest competitor entering Tuesday’s final round. Liu’s three-over 75 was enough to clinch the victory, making the tournament her second individual win of the season after claiming top honors at the Nittany Lion Invitational to open the 2015-16 campaign.

Liu set the pace early, the only golfer of the field of 90 to finish the first day under par at the completion of the first two rounds.

Senior Tina Chang was the only other College golfer to crack the top 30, finishing in a tie for 22nd place with a 16 over 232. Chang shot par or better for the first time Monday afternoon, firing a 71 (-1) in the second round after a rocky first round 82 (+10).

Rounding out the Tribe’s effort, sophomore Katie Edelblut tied for 31st with a score of 235 (+19), while freshman Elizabeth Choi and junior Mia Zanghetti finished within one stroke of each other, shooting respective scores of 248 (+32) and 249 (+33).

East Carolina topped the 17-team field with a 27 over 891, seven strokes clear of runner-up Old Dominion. The College finished with a 929 (+65), eight strokes behind Colonial Athletic Association rival Elon, which took third.

William and Mary returns to action next week, when it competes at the Wendy’s Invitational in North Charleston, S.C., Oct. 5-6.

The men’s team also earned a top five finish this week, coming in fifth at the Badger Intercollegiate with an 899 (+35), one stroke behind fourth place Butler.

Hicks shot a 1-under 71 in the final round to complete the tournament in a tie for eighth place with three other golfers at 220 (+4). It was his fourth round at par or under this season, which leads the team.

Three Tribe golfers finished in the top 30, led by freshman David Hicks. Hicks shot a 1-under 71 in the final round to complete the tournament in a tie for eighth place with three other golfers at 220 (+4). It was his fourth round at par or under this season, which leads the team.

Playing as an individual, sophomore Sam Aronoff rose up the standings Tuesday with a final round 72, good enough for a three-way tie in 20th place with a 224 (+8), while junior Austin Morrison finished tied for 29th with a total score of 227 (+11).

Also competing for the College, freshman Will Stewart and sophomore Alex Shattuck tied for 33rd place at 228 (+12) while junior Davis Morrison finished tied for 39th at 229 (+13).

The Tribe men compete in the Firestone Intercollegiate next Monday and Tuesday in Akron, OH.

Editor’s note: Due to Hurricane Joaquin, the Wendy’s Invitational in Charleston, S.C., was canceled. The women’s team competes next at the Pinehurst Challenge, scheduled for Oct. 12-13 in Pinehurst, N.C.