Home Variety Blogs Reaffirming a relationship with the pig 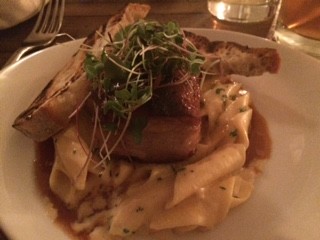 “Deciding to like pork was a good career move for me,” I said as I sliced the tender membranes attaching muscle to bone of a pork chop. The sweet-tea brined crust yielded under the blade to reveal eggshell colored muscle: sweet, savory and supple.

Without incredible exertion, any curious mind that dabbles in the slick pages of food magazines and enjoys familiarity with culture south of the Mason-Dixon could construct an understanding of the American South through pork. English settlers released pigs, notoriously easy-keepers, on the islands just off the coast to feed on the vegetation of the New World. The tradition continued throughout much of the region until Lee’s army called for provisions during the Late Unpleasantness, and everything from tail to trotter found its way into the mouths of the boys in gray.

Somewhere in between the Establishment and the Fracture, porcine idiomatic expressions found their way into the lexicon, such as “high on the hog.” Pork described the who, what, when, where and why of life. Who ate what cut of the pig at what time and place and for what reason allowed a glimpse into that person’s place in the world. A roasted pig added smoky memorability to social and political events alike. The pig’s appearance on a plate in whatever form has paralleled the ebb and flow of our lives for centuries.

Much later, a concerned mother and father futilely attempted to the point of frustration to coax a young and obstinate Miss Brannock to eat her pork from the day when stratus clouds blanketed her blue eyes, drawbridge-like arms folded across her chest and freckle-splashed cheeks wrinkled, and she declared that she no longer relished the taste of a prepared pig. Such are the proclamations of a six-year-old.

Her mother tried to instill the foundations of logic in her daughter’s young mind, hoping that the child would realize her unfortunate mistake: “But you like bacon; bacon is pork.”

Her mother tried to instill the foundations of logic in her daughter’s young mind, hoping that the child would realize her unfortunate mistake: “But you like bacon; bacon is pork.” Miss Brannock would not stand for syllogism. Bacon, in the way that only childlike magic can conceive, was a thing unto itself, an entity of hot saline sizzle and crisp entirely unrelated to a loin or chop.

“No, bacon is different,” retorted the young lady who knew full well that both cuts came from the same snuffling critter with cloven hooves. At this same period of her life, Miss Brannock was probably writhing against all efforts of the hairbrush and bounding away from evening baths.

Her father, in a dictatorial style that only Brannocks possess, told her that she did like pork. She had eaten it just last week and had enjoyed it, and she was going to continue to put knife to chop and chop to fork and fork to mouth in the same manner that she had always done. The coercive tactic saw as much success as the logical one, but it ingrained the aversion to pork more deeply into the psyche of the burgeoning person more than it opined on a solution. Ever more emphatically did Miss Brannock dislike pork.

Meanwhile Miss Brannock spent her formative years in a fickle relationship with the pig.

Meanwhile Miss Brannock spent her formative years in a fickle relationship with the pig. She delighted in the selection and arduous two-day long production of the annual Christmas country ham that culminates each year as a waltz with a mustard on the ballroom floor of a biscuit — all three of whose recipes are kept squirrelled away in the recesses of cherry kitchen cabinets. She gorged herself on the likes of prosciutto, serrano, its more complex and articulate Virginia cousin Surryano and other pork-based salumi and saucisson that accompanied the cheeses during Friday night dinners.

She dreamt of nothing with more hope than she did of waking up to an announcement of having sausage or bacon for breakfast. She looked forward to the smell of woodsmoke circling away from the metal-sided chrysalis from which barbeque would emerge to reward long summer hours of trekking outside. When she discovered the wonders of the almost-charred, brittle edges surrounding the tapestry of layered fat and muscle that is pork belly, she believed in the possibility of nirvana. Somewhere in the years between six and 19, she had revised her statement, “I won’t have anything to do with pork loin,” so as not to live her life as what Rhett Butler would term “a little hypocrite.”

Miss Brannock wanted to like pork, but a single experience with what a six-year-old palate deemed an oddly-flavored piece of pork left a formidable impression. Although one obscure bite tainted her view of this protein indefinitely, she had identified the conundrum — and also the blessing — of the pig: the diversity of the meat itself.

Although one obscure bite tainted her view of this protein indefinitely, she had identified the conundrum — and also the blessing — of the pig: the diversity of the meat itself.

Unlike many other animal proteins, each cut of meat is, as the young Miss Brannock had pinpointed in her conceptual understanding of bacon, an entity unto itself. Varying degrees of what Miss Brannock’s father terms “porky goodness” unites the animal that surprises the plate with an array of mouth-feels.

A smoked shoulder almost dissolves tenderly on the tongue, but pickled trotters recall childhood terrors of choking down old ladies’ Jell-O salads à la 1950 at church picnics. Belly combines the adipose and meaty qualities of both shoulder and trotter for balance and reconciliation of protein and fat. Bacon resembles the salty, browned outerwear of its neighboring cut, the belly. Moving along the belly to the haunches, we reach the ham, which, properly cured and then basted, tastes like a wedge of salted clove and cinnamon Christmas charm. None of these textures, bold and distinct, resemble those found in the loin; none of these flavors, unctuous and pungent, harken to the mild upper cuts of meat.

In short, a pig is not a cow, chicken, lamb or bird. In the latter four animals, the texture and flavor of the meat remains more or less consistent throughout albeit each cut differs in quality. For instance, in bird we see light and dark meat, but the textures remain similar. In beef we see tougher or tenderer selections, but we easily recognize both the underlying texture and flavor of beef.

The delicate nature of the loin continued to puzzle Miss Brannock. It could not withstand heavy smoke or preserving salt that the cuts which she loved could. Her teeth could not pull a chop with the satisfaction that they could pull the melting strands of muscle found in the shoulder. Miss Brannock desperately wanted the loin to taste like the lower cuts of the pig, earthy and decadent, and that is where she made her mistake.

After thirteen years of renouncing the upper portions of pig, Miss Brannock realized the multiple realities of the pig and resolved again to try a piece of the loin.

After thirteen years of renouncing the upper portions of pig, Miss Brannock realized the multiple realities of the pig and resolved again to try a piece of the loin. She came to terms that the loin was, indeed, its own masterpiece and that she should observe it as such. She should not expect it to embody any principles or definitions but its own. With an open heart and curious mind, she cut into an ancho-encrusted pork chop, chewed, swallowed and appreciated the chop for its unique brand of “porky goodness”: understated, simple, elegant.

After thirteen years of fretting, Miss Brannock’s mother and father sighed in great relief that their daughter had reconciled with the staple animal of the South.

The knife and fork willingly carved more muscle from bone at Nelson Miller’s farm-to-fork at Silt. Subtle richness of the chop complemented the refined acidic spice in the collard greens. Previous to the pork chop, the knife and fork had enjoyed a cube-shaped piece of belly over house-made pimento macaroni and cheese for the first course.

“Deciding to like pork was a good career move for me,” I said as I went happily from the low to high on the hog in one meal. How appropriate that I eat my first pork chop outside this home at Silt, named for sediment settling quietly at the bottom of the riverbed, for my restless controversy with the pig has alighted in the past and will not travel with me any farther.