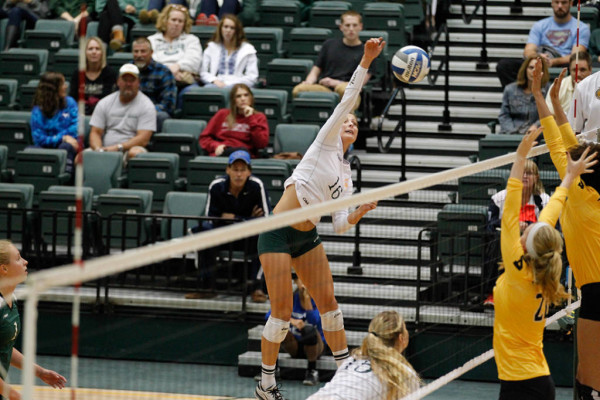 With a 2-1 advantage in sets on the heels of a dominant third set triumph, William and Mary stood poised to pull the upset against heavily-favored conference opponent James Madison in the familiar confines of Kaplan Arena on Sunday afternoon. The College had powered through a 25-22 even first set, cut their losses in a 15-25 thrashing and then rallied to claim a 25-15 victory of their own. The Dukes were flustered, mistakes rampant. Senior Dessi Koleva was dominating the game.

Then the fourth set happened. One JMU point followed another, and the Tribe’s (7-10, 1-3 CAA) upset bid vanished in a 25-13 collapse followed by a stalled out effort in the fifth set en route to a 15-12 loss to ultimately lose the match to its instate rival and Colonial Athletic Association powerhouse James Madison (14-3, 4-0) for the tenth loss of the 2015 season.

The stage was certainly set for the upset that never materialized. James Madison had easily glided to 3-0 victories against CAA opponents Delaware and Elon and hadn’t lost a set since a Sept. 23 match against Towson.

“We played well at times,” head coach Melissa Shelton said. “This is probably the toughest year the CAA has had in a while, and for us to take an undefeated conference team to five sets is impressive.”

“We played well at times,” head coach Melissa Shelton said. “This is probably the toughest year the CAA has had in a while, and for us to take an undefeated conference team to five sets is impressive.”

The Tribe stormed out in the first set with a .257 kill percentage, assisted by several costly mistakes by the Dukes. With a 20-16 lead, the College began to lose momentum on a 4-0 stretch by James Madison to tie the game, but after a timeout, the Tribe persevered with a final spike by junior Kristen Larrick.

In the second set, the Dukes’ attack came alive, pounding the College early into a 6-11 hole. A kill by Koleva briefly cut the deficit to three at 18-15, but then seven unanswered points sealed the Tribe’s fate.

“We need to generate more offense,” Shelton said. “We need to be able to play for two and a half hours.”

On the third set, the College racked up a .571 kill percentage to coast to the 25-15 victory. The Tribe ended the set on a light tap from redshirt junior Michelle Heath, faking out two James Madison players jumping to block a spike.

The disastrous fourth set proved to be the College’s undoing, yet it wasn’t without controversy.

“That was a nice trick by the other coach,” Shelton said. “She put in a lineout, and the ref checked it and ok’d it, but when he threw in the ball, before the head ref blew the whistle, she asked for a lineup check. But you’re not allowed to ask for a second check.”

As a result, the 1-0 lead for the Tribe off a service error by James Madison became nullified and replayed. The Dukes never looked back, racking up a 7-0 start en route to a 25-13 thrashing of the College.

Junior Janie Goodman of the Dukes proved to be a major part of the Duke’s dominance.

“[Goodman] came in and killed it, she was the match leader in kills [though] she only played four sets,” Koleva said. “That’s a game-changer right there.”

With the game on the line, the two teams began the fifth and final set.

“[Goodman] came in and killed it, she was the match leader in kills [though] she only played four sets,” Koleva said. “That’s a game-changer right there.”

A controversial call helped the College early on, as a ball that had clearly hit in bounds was called out. Yet the initial 4-0 lead disappeared quickly, as James Madison methodically worked their way back into the game, with excellent plays blocking the College’s outside hitters. Koleva hit the 1,000 kill mark with the Tribe’s eighth point of the final set.

“It’s really exciting, a lot of coaching and work went into it,” Koleva said.  “I don’t take it for granted.”

However, Koleva and the College were unable to progress beyond the 8-8 tie, ultimately losing the final set 15-12.

Though the College still has not defeated a team with a winning record, coach Shelton sees a lot of reason for optimism, particularly given the difference between this year’s 7-10 squad and last year’s 7-24 squad.

“We’re so much better than we were last year, it’s night and day,” Shelton said. “We just have to keep getting better. “

Prior to the match against the Dukes, the Tribe dropped a 3-1 match against CAA opponent Towson (15-2, 2-1) on Friday night in Kaplan.

William and Mary continues its season-long six game homestand this Friday when they face conference opponent UNC-Wilmington. The match is scheduled to begin at 7 p.m.