Home Sports Games Football: Tribe gears up for visit to No. 14/16 Villanova 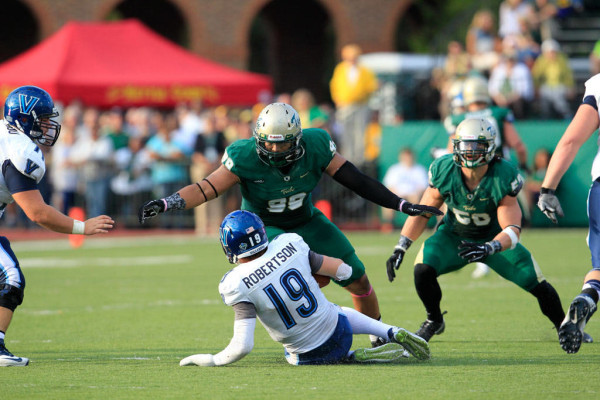 After Delaware (2-3, 1-1 CAA) trampled William and Mary to the tune of 347 rushing yards and consequently slipped past the favored Tribe for a 24-23 victory this past Saturday night, the College’s outlook for post-season play is significantly dimmer. A road game at Colonial Athletic Association powerhouse Villanova this Saturday provides little reprieve.

“[We] played so-so on the road and had it come down to a last second field goal … We have to keep getting better,” head coach Jimmye Laycock ’70 said. “It doesn’t get any easier for us.”

Currently, the Wildcats (2-2, 1-1 CAA) stand as No. 14/16 in the nation, while the Tribe lost its ranked status after the loss to the Blue Hens. However, Villanova senior quarterback and winner of the 2014 Football Championship Subdivision Offensive Player of the Year award, John Robertson has been declared out for the entire season with a PCL tear that he suffered in the Wildcats’ 28-21 victory over Delaware Sept. 19. Since then, his replacement, redshirt freshman Zach Bednarczyk, hasn’t exactly lit up the scoreboard. In Bednarczyk’s first start against Pennsylvania Sept. 24, he finished 18 of 31 with 185 yards and one touchdown to go with an interception. The Wildcats had a bye last weekend, providing Villanova with a much-needed break to drill the first-team offense with Bednarcyzk under center.

“We have to keep getting better,” head coach Jimmye Laycock ’70 said. “It doesn’t get any easier for us.”

The Tribe will do its best to rattle Bednarcyzk in the pocket, although the pass rush has been the missing element for the College all season, ranking 10th in the 12-team CAA with just five sacks forced. However, something has to give this weekend, as the Wildcats are dead last in protecting the passer and have given up a conference-high 14 sacks.

As far as defending the run, the Tribe has less to worry about than it did last week against Delaware. Villanova averages just under 135 yards per game rushing, a pittance compared to the 250.2 that the Blue Hens were accustomed to racking up on the ground. This is certainly a relief to the College front-seven that has lost both starting outside linebackers to injuries. Redshirt freshman Josh Dulaney and junior Stephen Lubnow have thus far stepped up at both outside linebacker position with solid performances — Lubnow registered 16 tackles Saturday. However, the Tribe is likely relieved to face a less potent running game to allow the duo to fully settle into their relatively new roles.

Facing the Wildcats defense, however, is an entirely different story. After struggling last week when he went 8 for 20 for just 168 yards passing, things won’t get any easier for junior quarterback Steve Cluley. Villanova boasts the best pass defense of the conference, surrendering just 144 yards on average while nabbing three picks against five touchdowns. The Wildcats know how to fill the gaps against the run as well, as their fourth-best running defense elevates the entire unit to No. 1 in the CAA for total defense, giving up just 275 yards a game. The Tribe is 1-4 in games where the offense earned less than 300 yards since the 2014 season.

With No. 5 James Madison, No. 16/18 Richmond and No. 21/23 New Hampshire still on the docket for the Tribe, qualifying for one of the CAA’s four spots in the FCS playoffs is no easy task. Another loss like Delaware and that bracket could become crowded quickly, potentially leaving William and Mary out of the postseason for the fifth consecutive season.

Expect the Tribe to hand off to junior tailback Kendall Anderson early and often, as Anderson has yet to finish a game under 100 yards rushing. Considering the lack of experience with Bednarcyzk under center, the Wildcats are likely to embrace a conservative approach on moving the ball down the field as well, making for a low scoring contest. This type of defensive grind ought to suit the Tribe well, and while going into a hostile environment is never easy, Villanova is ripe for the upset.