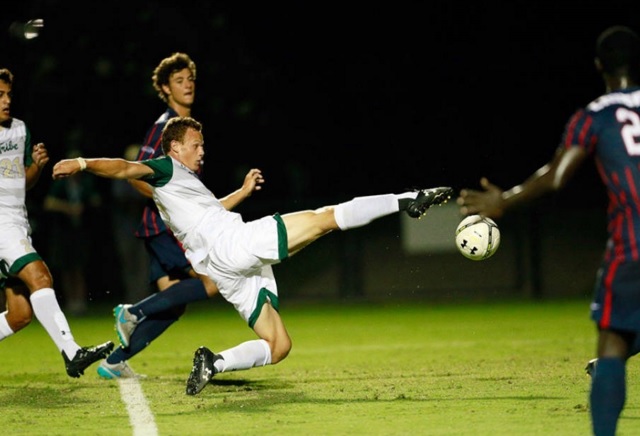 William and Mary started quickly against Colonial Athletic Association opponent James Madison but couldn’t sustain the momentum, scoring the opening goal but ultimately falling on the road 3-1 for the third consecutive loss after the upset of then-No. 10 Elon two weeks ago.

Neither team attempted a shot until the 10th minute of action, but the game’s first attempt found the back of the net. Senior midfielder Jackson Eskay knocked a through ball into the box, and freshman forward Ryder Bell beat everyone else to the ball, depositing his shot into the bottom left corner to give the Tribe (4-6-2, 1-4 CAA) the early lead. It was Bell’s fifth goal of the season, he is now tied for the most goals on the team.

Neither team attempted a shot until the 10th minute of action, but the game’s first attempt found the back of the net.

The College continued to pressure the James Madison (3-6-4, 2-1-2 CAA) defense over the next 10 minutes in an attempt to put the game away early. Bell nearly tallied again in the 12th minute, but Dukes goalkeeper Kyle Morton denied Bell’s effort with his first of five saves. Eskay fired a wicked drive towards goal in the 21st, but Morton was there to make the diving stop. The ball fell towards Bell once again, but he pushed his follow-up attempt wide of the mark.

The Dukes equalized in the 26th minute through defender Toby Appleton. Appleton intercepted the ball and then took a dribble before sending a powerful drive past redshirt freshman goalkeeper Sam Onyeador. James Madison gained a spark in its step after tying the score, attempting five more shots in the final 15 minutes of the first half, but Onyeador and the Tribe defense held steady.

The second half started similarly to the first half, with the College initiating the attack in the opening minutes of the period. After Bell put another shot wide, freshman midfielder Marcel Berry fired on frame, but his attempt was snagged by Morton.

The Dukes scored the decisive goal in the 60th off a corner kick. James Madison midfielder Thomas Shores lifted his cross into the box, which found the head of Dukes defender Bjarki Aðalsteinsson who knocked his headed shot into the roof of the net to put the Tribe behind 2-1.

The Dukes scored the decisive goal in the 60th off a corner kick.

Eskay attempted to put the College back on terms twice over the next few minutes, but his first shot was stopped by Morton while his second attempt was blocked by the Dukes’ backline. Two minutes later Eskay picked up a yellow card.

James Madison tacked on a third goal in the 68th minute on a passage of play similar to the one that led to the Tribe’s score. Dukes forward Eric Schmidt sent teammate midfielder Connor Coward free on goal with a through ball, which Coward converted with class, beating redshirt junior goalkeeper Mac Phillips with a rising drive to the top right corner. Neither team found the back of the net over the final 22 minutes, and James Madison walked away with the 3-1 triumph.

William and Mary returns to Martin Family Stadium this Saturday in a match against CAA opponent UNC-Wilmington. Kickoff is scheduled for 7 p.m.