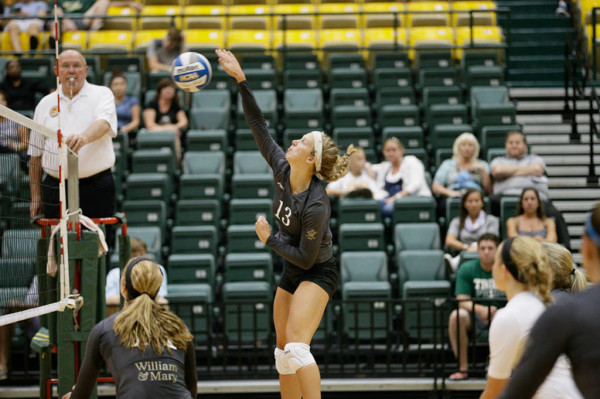 Editor’s Note: This game occurred prior to the win over Delaware on Oct. 12, 2015 but was uploaded after.

The 2014 Colonial Athletic Association regular season champions from the College of Charleston came to Kaplan Arena with a two-game winning streak last Saturday night. William and Mary played in hopes of an upset, but fell in straight sets 3-0 for the Tribe’s fourth consecutive loss.

The College (7-12, 1-4 CAA) began the first set by earning the match’s first point from a Cougar attack error, but after keeping pace with its opponents, the Tribe allowed a 10-3 run midway through the game. With the Cougars (11-8, 3-2 CAA) up 20-13, the College tried to come back. Closing the gap, the closest it came to breaking the deficit was 23-21 after freshman Katie Kemp made back-to-back service aces. However, Charleston won the set with a kill and a crucial service ace to take a 1-0 lead on the night with a 25-21 first set victory.

The second set was a microcosm of the Tribe’s season thus far, as the effort was present and kept the game close enough to require overtime, yet the Cougars escaped with the win 29-27.

The second set was a microcosm of the Tribe’s season thus far, as the effort was present and kept the game close enough to require overtime, yet the Cougars escaped with the win 29-27. Things looked promising for the home team as the game began 4-1 in favor of the Tribe and it kept a lead for another five serves before the game tied at 5-5. The game tied again at points six through 10 before the Tribe took a 13-10 lead while senior Dessi Koleva was in serving position. Now it was the Cougars’ turn for a comeback, which they completed a 4-1 run to tie the game again at 14. Both teams didn’t let up their effort as the game tied again at 17, 19 and 20. The Cougars scored key points after reaching the 20-point mark, but let the Tribe back into the game as redshirt junior Michelle Heath made a kill assisted by Kemp at the Cougars’ match point, putting the Tribe at a single-point deficit at 24-23. After Charleston had a ball handling error and an attack error, the College held the lead again at 25-24. Per the rules, the game went on until a team held a two-point lead. The marathon set continued with ties at 25, 26 and 27 before the Cougars made consecutive kills to claim the second set.

Down 2-0 in the match, the Tribe needed a win to keep the night alive. Unfortunately for the College, it turned out to be its lowest-scoring set of the night as the Cougars won 25-19. Just like in set two, the game began 4-1 with the Tribe leading as Koleva held strong in service. The College held a four-point lead 6-2 and at 8-4 before the Cougars fought to tie the game at 12. After an exchange of two points per team the score sat in a stalemate again at 14. The Cougars, eager to close out the match without conceding a set, went on a 9-2 run to take a 23-16 lead with a combination of kills and Tribe errors. The College scored three straight points to encroach on the Cougars’ lead, but it surrendered the service as freshman Heather Pippus made a service error. Charleston held possession at match point and made the final blow with a kill to claim victory of the match.

Sophomore Sydney Biniak led the Tribe with 10 of the team’s 39 kills, while Koleva was close behind with nine. Koleva led the squad in digs with 11. Though Charleston made 23 attack errors to the College’s 14, the Tribe made seven service errors to the Cougars’ two, a big factor in a close matchup. Charleston also outmatched William and Mary with 55-39 in kills, 63-39 in digs and .258-.203 in hitting percentage. Defensively, Pippus and sophomore Paige Humphrey each made three blocks to lead the team during the match.

This defeat is the fifth time in the 2015 season in which the Tribe never took a set during a match and drops the College to a 1-5 record in the conference.

William and Mary completes its three fall break matches Monday at 2 p.m. with a match against Delaware (9-9, 1-4 CAA) at Kaplan Arena.