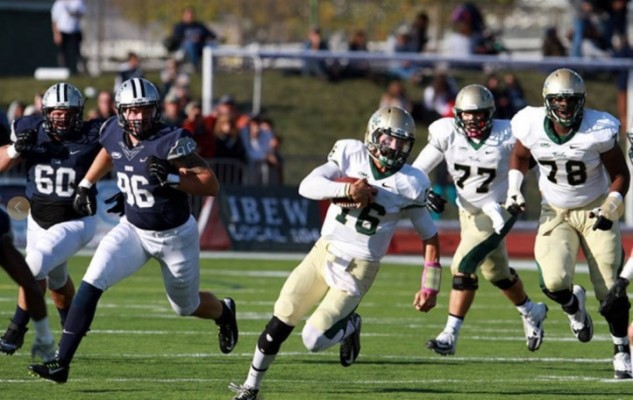 Saturday, No. 24 William and Mary will play host to the No. 19/20 New Hampshire Wildcats at Zable Stadium. After defeating Villanova in a 38-16 blowout last Saturday, the Tribe (3-2, 2-1 CAA) looks to increase its standing in the Colonial Athletic Association by defeating another perennial powerhouse of the conference.

New Hampshire (3-2, 1-1 CAA) split its previous two CAA matchups this season with a win over Elon and a loss to Stony Brook. Last week’s win over Elon was similar in score to the College’s victory over Villanova, as the Wildcats won 37-14. However, as Elon is not a top 25 Football Championship Subdivision program, it’s difficult to make direct comparisons on the level of competition.

The last time the Wildcats came to Zable, unranked William and Mary upset No. 16/17 New Hampshire in a 17-0 victory back in 2013

This year, both teams are evenly matched due to skill as well as injuries plaguing the teams. New Hampshire’s starting quarterback, Sean Goldrich, was out for three consecutive games due to an ankle injury, but is set to return this weekend if he stays healthy this week in practice. Additionally, Wildcat offensive tackle Andrew Lauderdale had surgery on his knee which caused him to miss two games; he is slated to return as well. On the College’s side, senior tailback Mikal Abdul-Saboor participated in some of last week’s game, though it is unsure how much he will play Saturday. Senior outside linebacker Zach Fetters returned last week to the Tribe defense after being out since the game at Virginia, but senior outside linebacker Ian Haislip has not appeared yet since his injuries sustained at the same game.

As William and Mary has the third-highest CAA scoring offense and the No. 11 scoring defense in the FCS and No. 1 in the CAA, the Tribe should prove a tough team to beat for the Wildcats.

As William and Mary has the third-highest CAA scoring offense and the No. 11 scoring defense in the FCS and No. 1 in the CAA, the Tribe  should prove a tough team to beat for the Wildcats.  The offense last week showed its potential to light up the scoreboard, racking up 466 yards and 31 points. The College will need a similar performance from junior running back Kendell Anderson as the Tribe offense has operated best with a run-first philosophy, though junior quarterback Steve Cluley’s strong showing last week should keep the Wildcat defense honest and prevent New Hampshire from stacking eight into the box. Sophomore wide receiver DeVonte Dedmon has shown his big play ability; expect New Hampshire to always shift safety help to his side.

With Goldrich back in action, the College defense will be on high alert for the Wildcat passing game. One of the factors working for the Tribe last game was that the star quarterback senior John Robertson for Villanova was injured, so the fact that New Hampshire’s offense just returned all starters in the lineup is a bit of unfortunate timing for the College. It will be interesting to see if the Wildcat unit has the same cohesion with Goldrich under center. New Hampshire ranks right below the Tribe at No. 4 CAA scoring offense while its scoring defense is No. 3 in the conference.

This is only the second of five scheduled home games for the Tribe, and it already took the first 21-0 over Stony Brook. The College ranks third in the CAA standings currently, only behind undefeated No. 5 James Madison (6-0, 3-0 CAA) and No. 16/13 Richmond (4-1, 2-0 CAA). New Hampshire is in fifth currently and is on a two-game winning streak. After the loss to Stony Brook, New Hampshire needs every CAA victory it can get to secure a playoff spot, while the Tribe can’t afford to give away conference victories at home. A game like this can make or break the playoff outlook for either team, and it should be a hard battle between  two of the top teams in the FCS.

Kickoff is at noon and the game will be broadcast regionally on Comcast SportsNet.