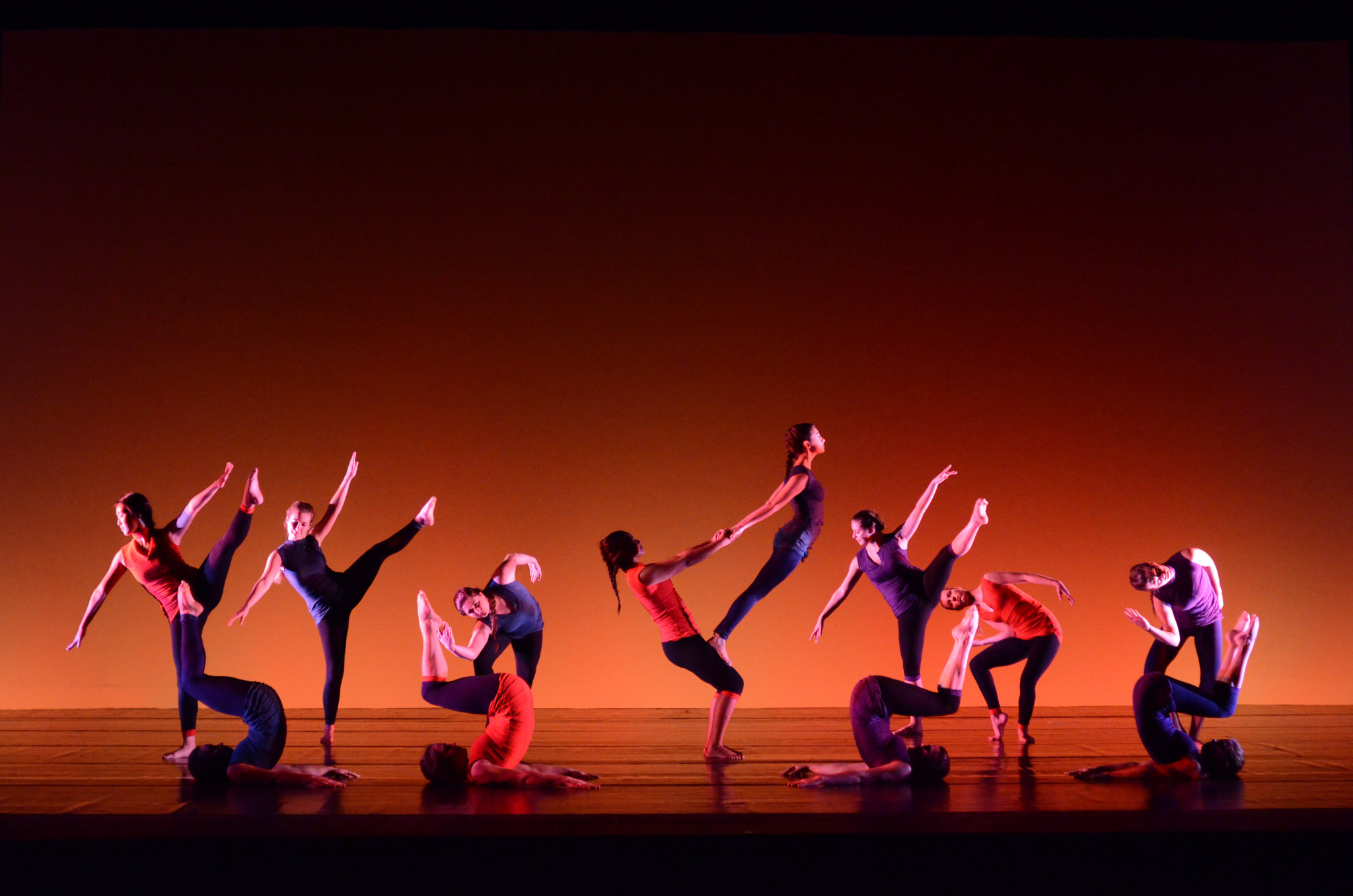 Each number’s subtle and smooth lighting effects by lighting designer Michael Jarett set the mood for the audience. Damion Bond’s costume design also served to establish the tone of each dance, distinguishing them from one another without being distracting or obtrusive. Although the transitions between numbers seemed unduly long, the performances that followed were captivating enough to make up for the extended periods of downtime.

“DANCEVENT” opened with a group number, choreographed by associate professor of dance and Africana studies Leah Glenn, called “Reaching Out and Leaning In.” It was a quintessentially modern piece, featuring strong arm and leg movements with flexed hands and feet, but it differentiated itself through the use of intricately-mirrored duet choreography throughout the piece. While the synchronization was not as crisp as one would like to see in an opening number, the unorthodox head and hip movements showed promise for the rest of the night’s choreography.

Upon the curtain’s next rise, the stage was bathed in a soft green light that expanded and strengthened as the music intensified. Director of Dance Joan Gavaler’s self-choreographed solo “Hatch” showed a clear understanding of storytelling and stage presence that could be seen throughout the night’s other performances.

“The Next Step,” Glenn’s self-choreographed solo, demonstrated the commandingly controlled movements consistently displayed throughout the night. This control was particularly emphasized through the contrast between Glenn’s movements and her loose-fitting, flowing costume.

The first half of the show closed with the night’s strongest number: “The Risk of Standing Still,” a group piece choreographed by lecturer of dance Lauren Morris. The number featured dark costumes and minimal lighting, with dancers performing slow, subtle movements juxtaposed against abrupt arm swings and placement changes. Morris’ choreography highlighted numerous instances of physical contact between the dancers. The dynamic choreography was simultaneously strong and soft and it was executed tightly and cleanly.

Following intermission, alumna Libby Kerver ’15 performed a solo called “The Characteristics of Living Things” choreographed by Morris. The performance both began and ended on the floor in the back of the stage. Kerver utilized the entire stage and, although her movements were crisp, they flowed together smoothly. Even though the grand music choice may have more obviously suggested powerful jumps, Morris’s choreography was an understated, graceful, strength-filled flow performed in a deep plié.

This strong solo was followed by another, more unorthodox solo by Gavaler. The performance, entitled “Captain Equilibrium,” pushed the boundaries of what one would typically see at a modern dance performance. It centered around a spoken-word piece written by Gavaler and Jeffrey Fiske, which Gavaler performed alongside and illustrated with her movements. The piece emphasized the monologue over the movement, which was unconventional for a dance performance but served to clearly illustrate the storyline of a well-intentioned, if slightly awkward, superhero experiencing a midlife crisis. In addition to being so text focused, this number also differed from the others in that it was the first to utilize a prop: a coatrack onto which Gavaler placed the pieces of her costume she shed as she shed her superhero identity. While the stark difference in tone and topic of this piece made it stand apart, the smooth use of the lighting — changing color as the monologue’s tone changed — allowed this piece to blend better with the others.

Following Gavaler’s unusual piece, Lindsay Carr ’18, Sophia Perrotti ’16 and Hailey Ramsey ’19 performed the night’s most emotionally poignant number, “Invisible,” which was choreographed by Glenn. The performance heavily featured a door, placed downstage left. The choreography featured jumps and leaps along with varied levels to accompany the music’s strong bass beat. The piece reached its peak emotional impact when the three dancers exited the stage through the door, toward the light source, and reentered on stage right in different costumes, looking pained and afraid. The resulting extreme shift in tone left the audience in a state of feeling that was not provoked by any of the other pieces, although “Invisible’s” effectiveness would have been even greater had the ensemble choreography been executed more cleanly.

The night finished with a large group number choreographed by Gavaler called “Falling and Flying.” The piece featured colorful costumes, numerous well-executed lighting changes and acrobatic feats of strength. It was clear that the dancers trusted one another and this trust allowed for impressive partner lifts and assisted walkovers. The cleanliness, timing and synchronization left something to be desired for a finale number, but the stability and trust exhibited in the partner work left a lasting impression as the final curtain fell.