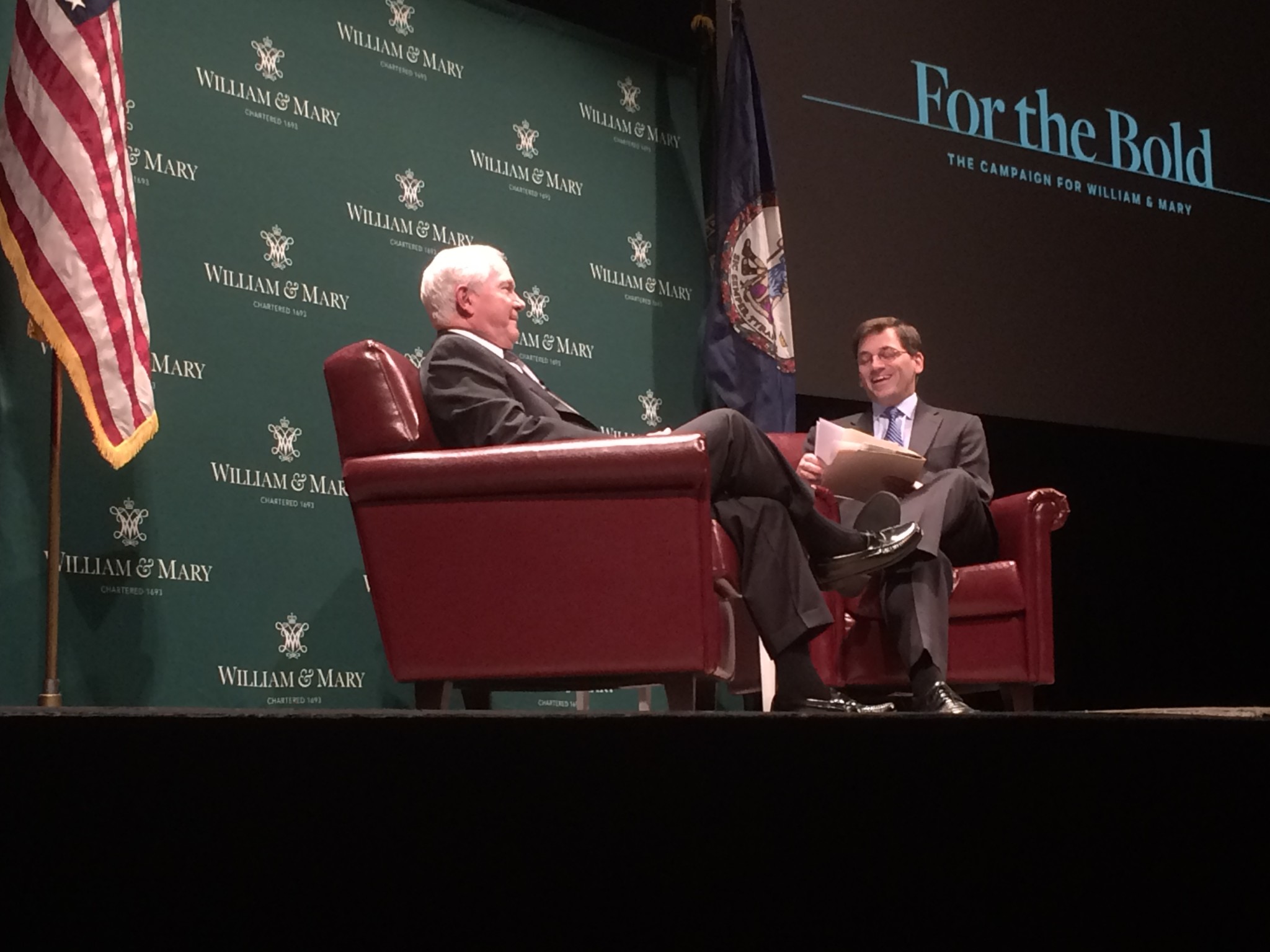 Regarding the Benghazi hearings, Gates said that he agreed with current Secretary of Defense Leon Panetta’s assessment that there was no opportunity for U.S. military intervention in Libya.

“I think the question that people don’t want to ask, because of the loss of the ambassador’s life, is was it really necessary for him to be there in the first place?” Gates said.

Gates said that he has not taken the time to listen to the testimony at the hearings. However, he said that the pertinent questions for the investigation into the 2012 Benghazi attacks that left U.S. Ambassador Christopher Stevens dead involved the requests made to the State Department to increase the level of security at the facilities in Benghazi.

I think the result of [the Arab Spring] conflicts is that we face a generational conflict in the Middle East. I think we’re going to face a lot of violence, turbulence, instability there for 20, 30 years, maybe longer.

Baker asked about the controversy surrounding Democratic presidential candidate Hillary Clinton’s use of her personal email. Gates responded that he stopped using email altogether when he became Director of the Central Intelligence Agency.

“I was always worried that I would get an email from some station chief saying, ‘If I don’t hear from you in three hours, I’m going to overthrow the government here.’ And that I’d be in a 4-hour meeting,” Gates said. “You’d think after all the exposes and all the scandals, both in government and business and elsewhere, that people would be smarter about their use of email.”

Gates spoke about simultaneous conflicts the United States faces in the Middle East: Shia Muslims vs. Sunni Muslims, Islamists. vs. secularists, reformers vs. authoritarians, and the challenge of fostering unification in war-torn regions like Iraq, Libya and Syria.

“My worry is that since the beginning of the Arab Spring we have looked at each of these situations independently …” Gates said. “I think the result of these conflicts is that we face a generational conflict in the Middle East. I think we’re going to face a lot of violence, turbulence, instability there for 20, 30 years, maybe longer.”

Gates discussed the bipartisan policy of containing communism during the Cold War, saying that the United States needs a similarly cohesive, long-term plan for operating in the Middle East. This includes identifying and supporting allies in the region and encouraging friendly authoritarian governments to embrace reform.

Gates focused upon Syria, saying that he believed there had been a brief window in the early months of the country’s civil war when the United States could have possibly had more of an influence on the situation.

“If we had acted quickly and with agility and sent in to the opposition weapons, much as the CIA did to the Mujahedeen in Afghanistan, we may have been successful in either forcing him out or forcing some kind of political settlement or even driving him out,” Gates said. “I think that window closed a long time ago.”

In the wake of the cancellation of the government’s program to train and equip Syrian rebels to fight ISIS, Gates said that the U.S. is better off containing the spread of the Islamic State by empowering local tribes and groups to protect their home territory.

“[Putin] and I had a very interesting relationship and I think he saw it very much as CIA and KGB … We would talk to each other with a bluntness, a directness that horrified some of our diplomats.”

One of Baker’s questions touched upon the viability of a no-fly zone in Syria and Russia’s intervention in the Syrian conflict. Due to the humanitarian crisis in the region, Gates said he would propose establishing a no-fly zone without attacking Assad’s air defense.

“My view of the Russians, that’s the point where we say, ‘We’re not anywhere near Assad’s turf, so just stay the hell out of the way,’” Gates said. “That allows us to push back against the Russians, but in a way that doesn’t threaten their interests.”

Baker asked Gates to speculate on whether or not the resurgence in U.S. tension with Russia was inevitable. Gates said that had President George H.W. Bush gotten reelected, relations between the two countries might be better today.

“Remember Bush came under a lot of criticism in Washington in November 1989 for not going over and dancing on the wall, to celebrate the fall of the Berlin Wall,” Gates said. “Bush had a sensitivity for the reaction of foreign leaders that was very sophisticated … I think he would have been more sensitive to the magnitude of the humiliation that the Russians suffered with the collapse of the Soviet Union.”

Gates also spoke of his relationship with current President of Russia Vladmir Putin, noting that he had previously interacted with Putin’s KGB bosses.

“He and I had a very interesting relationship and I think he saw it very much as CIA and KGB,” Gates said. “We would talk to each other with a bluntness, a directness that horrified some of our diplomats.”

One such interaction involved Putin and Gates working with maps that predicted the range of Iranian missiles.

“He shoves [the map] across the table at me and says, ‘This is what our intelligence says the range of the Iranian missiles are,’” Gates said. “I took a look at it for a second and I pushed it right back at him and said, ‘You need new intelligence.’ And he actually kind of laughed.”

Baker asked Gates to give his opinion on whether Putin saw President Barack Obama as weak. Gates said that Putin is an opportunist who likely views the current administration’s unwillingness to get further entrenched in conflicts in the Middle East as an opportunity for Russia. However, he said that Putin’s aggressive foreign policy decisions would backfire in the long-term and likely cause NATO nations to increase their defense budgets. Gates said that NATO should not necessarily set up permanent bases in Eastern Europe, but definitely position equipment and engage in robust troop rotations to discourage Russian expansion.

“Shortly after that photograph was published, I got a photoshopped copy of it back, with all of us dressed in super hero costumes … So Obama was Superman, Biden was Spiderman, Hillary naturally was Wonder Woman. For some reason I’m the Green Lantern.”

When asked about his stance on the Cuban embargo, Gates said that the United States’ Cuban policy has long been driven by domestic politics. Gates said he supported Obama’s decision to loosen restrictions on Cuba.

“I wanted to have the embargo removed early enough so that Fidel lived a long time and Cubans could come to see that their miserable lives were the fault of Fidel’s policies not our embargo … I think this is way overdue,” Gates said. “Frankly, we have relations with a lot of countries that have terrible leaders and oppress their people. Give me a break.”

A member of the audience asked Gates to give his position on the Iranian nuclear deal. Gates said that he does support aspects of the deal, such as the fact that Iran will dispose of 97 percent of its enriched uranium and make drastic changes to its nuclear facilities. However, he said that monitoring whether or not Iran is meeting the terms of the deal will likely cause wrangling between the White House and the intelligence community.

“Now that the agreement has been signed, I think it would be a mistake to overturn it …” Gates said. “I think that what’s missing in this whole thing … is a strategy on how to deal with a more aggressive Iran that has billions more dollars to spend on disruption in the events in the Middle East. The Iranians have made it clear that their foreign policy is not going to change one whit, because of this agreement they are still going to be our antagonists every place. The administration, in my view, in parallel with the agreement should have announced a major strategy on how it’s going to deal with a newly empowered and richer Iran, one that wouldn’t just involve selling more weapons to Israel or Saudi Arabia … making clear to our friends that we’re going to be there and have a big presence and we’re going to resist these guys every place they rear their heads … Now it looks like we just wanted an agreement so badly that we’d give up anything.”

In regards to the Obama administration’s policy in the Middle East, Gates also recollected about the military raid that led to the death of Osama bin Laden. Gates said he had been concerned that Pakistan would cut off the U.S. military’s supply lines in retribution for the raid. He said that Vice President Joe Biden had also been concerned about the political fallout a failed raid would cause. Gates said that President Obama demonstrated courage by making the decision to carry out the raid.

Gates also discussed the now-famous photograph of the presidential cabinet seated around a table watching the raid progress.

“Shortly after that photograph was published, I got a photoshopped copy of it back, with all of us dressed in super hero costumes,” Gates said. “So Obama was Superman, Biden was Spiderman, Hillary naturally was Wonder Woman. For some reason I’m the Green Lantern.”

Gates said that he used the photoshopped photograph to argue against releasing photos of bin Laden’s dead body, saying that circulated photos could be manipulated to incite anger and possibly cause harm to American troops stationed in the Middle East.

I joined the CIA to wage war on the Soviet Union and I was the Director of the CIA when it collapsed. That’s closure.

Some of Baker’s questions also focused on Gates’ time as a student at the College of William and Mary. When asked what had changed the most about the College, Gates first said the price. He noted that, thanks to scholarships, the cost of his first semester as an out-of-state student amounted to around $361. He also said the school has gotten smarter and more selective since he attended, but that its cooperative community has not changed much.

“I think one of the things that differentiates William and Mary from the Ivies and places like Stanford and so on is academic competition here at William and Mary is not cutthroat,” Gates said. “Unlike a lot of places that are very competitive and where everybody’s smart, competition isn’t a zero sum game, for me to succeed you have to lose.”

Baker also asked Gates to name his favorite job over the course of his career, which saw him serve as President of Texas A&M University, Secretary of Defense and President of the Boy Scouts of America. Gates responded by saying that he found his work as Deputy National Security Advisor most gratifying.

He said that some of his most stressful job-related situations came as President of Texas A&M University, such as when he had to fire the school’s football coach during his first semester.

“I once asked my wife, ‘How come I feel more about Texas A&M Football than anything I’ve ever done in my life,’” Gates said. “And with the wisdom of decades of marriage, she said, ‘It’s because you have no control.’”

Baker asked Gates whether or not he was supporting or advising any candidates in the current presidential race.

Gates also said that he was not considering pursuing any more government work. An audience member asked Gates if he had any knowledge about a political action committee formed in support of him running for president.