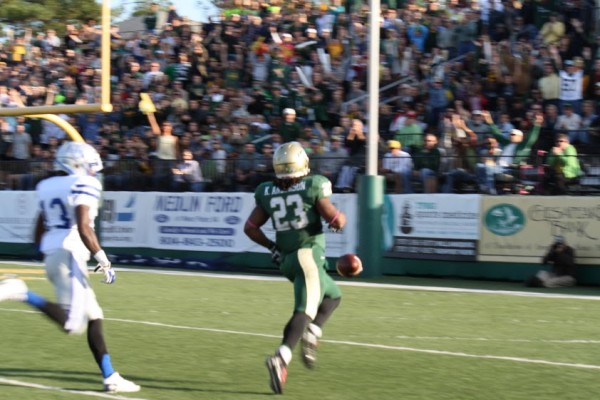 Junior quarterback Steve Cluley rolled out to his left, the entire offensive line shifting protection along with him, save for a pulling guard to the right for the counter. Junior running back Kendell Anderson took the handoff and followed the block untouched down the right side of the field for what appeared to be a 74-yard touchdown — except it wasn’t.

Three yards before the end zone, Anderson dropped the ball, thinking he had scored. The fumble bounced out of the back of the end zone, giving Hampton possession of the ball at its own 20. It was an incredible blunder, a demoralizing play, a blown opportunity. And it didn’t matter at all, as William and Mary easily trounced the Pirates of Hampton 40-7 on a breeze of a homecoming game at Zable Stadium Saturday afternoon, despite several missed opportunities for the Tribe.

“I thought our defense played really well, and offense did what they had to do,” head coach Jimmye Laycock ‘70 said after the game. “Offense started a little sporadically, but I think the story of the day is the effort of our defense.”

The College (5-2, 2-1 Colonial Athletic Association) got off to an anemic start against Hampton. After shutting down the Pirates’ first drive, Hampton shanked the punt, providing the Tribe with possession at the Pirate 41-yard line. Anderson couldn’t find space up the middle, and Cluley’s 3rd and 3 pass fell incomplete. Standing at the 34-yard line, Laycock decided to go for it. However, Christian Reeves dropped a bullet pass at the 20-yard line, and the College turned the ball over on downs.

I thought our defense played really well, and offense did what they had to do,” Laycock said.

What might have been a great opportunity for other teams dissolved into another punt for the Pirates. Hampton’s offense was lackluster at best the entire first half, registering 35 yards for the first 30 minutes of play compared to the Tribe’s 385. The second drive netted negative 17 yards as senior linebacker Marcus Harvey registered a sack on 3rd and 10.

The Tribe offense continued to sputter, as Anderson picked up quality yards down to the Pirate 23-yard line before the drive stalled out. Junior kicker Nick Dorka Jr. connected from 37 yards out for the first points of the game with 9:29 left in the first quarter, as William and Mary took the lead 3-0.

Yet Dorka did not connect as well on the subsequent kickoff, earning a penalty for kicking the ball out of bounds. Pass interference on senior safety DeAndre Houston-Carson moved Hampton all the way to midfield.

But Hampton quarterback David Watford was simply incompetent against the Tribe defense. A zone blitz on 3rd and 7 and Watford found himself being chased by Harvey once again. Watford chucked the ball down the field to awaiting sophomore defensive end Matt Ahola with no receiver in the area. On the interception return, Ahola ran the ball down to the Pirate 29-yard line.

However Dorka trotted out once again for a 25-yard field goal after another drive stalled.

Hampton’s next drive earned a first down and evidently encouraged the coaching staff so much that Hampton ran a fake punt on fourth down with 12 yards to the first down marker. The punter kept the ball and dashed left, meeting three Tribe defenders behind the line of scrimmage.

Yet a personal foul on the Tribe pushed the drive back to its own 49-yard line rather than the Hampton 34. With 55 seconds left in the first quarter, Dorka once again strode onto the field, hitting a career-long 47-yard field goal as the College failed to find the end zone once more. The Tribe led 9-0.

Even with the injury to middle linebacker Luke Rhodes, the College didn’t miss a beat or a tackle on rush defense, as senior linebacker Zach Fetters stepped up in Rhodes’ position. The Tribe allowed just 27 yards on 21 total carries.

With the defense playing lights out, it was only a matter of time for the Tribe offense to get going. Cluley got in rhythm and Anderson started to wear down the defense, smashing into the end zone three minutes into the second quarter. 16-0 became 23-0 as Cluley threw a pair of strikes to sophomore wide receiver DeVonte Dedmon, including a 16 yard post route for the touchdown.

After another Hampton punt, Anderson broke his 74-yard run with the disheartening fumble before crossing the goaline. Yet Watford handed back the momentum with an underthrown deep ball straight to Houston-Carson. Cluley picked apart the Pirate secondary in the two-minute drill to put the score at 30-0 at halftime.

The second half was much like the first, though the Tribe rotated in backup players, with Dedmon noticeably absent.

“He’s got a rib injury; I don’t know what the extent of it is,” Laycock said.

The shutout was spoiled by a pair of broken tackles, allowing a catch and run for 48 yards and a score. But the outcome was never in doubt, as the Tribe prevailed to win 40-7 on Homecoming weekend.

Up next for William and Mary is a huge CAA matchup against conference powerhouse No. 9 James Madison (7-1, 4-1 CAA) at Zable Stadium. Prior to this weekend’s narrow 59-49 loss to Richmond in Harrisonburg , JMU was No. 4 overall in the Football Championship Subdivision. Kickoff is set for 4 p.m.