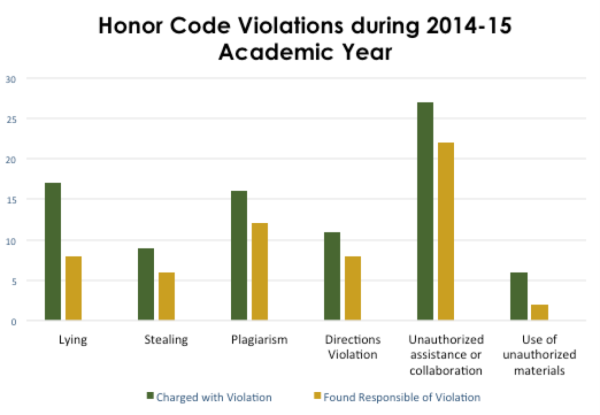 College of William and Mary students were found responsible for 46 Honor Code violations out of 61 reports during the 2014-15 academic year.

With the recent release of the spring and summer 2015 semester data, the Honor System Advisory Committee was able to report statistics for the entire 2014-15 academic year. These statistics summarize the combined activity of all six honor councils, which exist for students in the undergraduate programs, the Arts and Sciences graduate program, Mason School of Business graduate program, the School of Education, the Law School and the Virginia Institute of Marine Science.

“Unauthorized assistance or collaboration” was the most common offense for which students were found guilty; 22 students were found responsible in those cases. According to the report, responsible students committed this infraction in a variety of ways, ranging from a student using a cheat sheet on his or her phone to a student consulting a classmate’s exam during a testing period.

Students were charged with lying most frequently, followed by plagiarism. However, more students were found responsible for plagiarism. In many cases, the two infractions overlap, since students confronted for plagiarism sometimes initially denied their guilt. Dean of Students Marjorie Thomas noted that Honor Code violations occasionally overlap with Student Code of Conduct violations, a situation that requires a special decision as to whether the Honor Council will handle adjudications.

In the past academic year, the most common primary sanction for an Honor Code violation was suspension, 16 of which were issued. Sixteen students were also given an F in a course, making an automatic failing grade the most likely secondary sanction.

Associate Dean of Students Dave Gilbert, who advises and trains the members of all six councils, said that Honor Code violations have spiked in the last year.

“Last year we experienced the highest number of reports in my ten years here,” Gilbert said in an email. “We are currently studying the results to determine what we can learn and where we will target our preventative efforts.”

“The Honor System Advisory Committee also will be spear-heading a campus-wide survey assessment of students and faculty to determine where we are doing well and where we have remaining challenges,” Gilbert said in an email. “In the spring semester, I expect the committee will identify key areas where we need to focus our efforts with the faculty and student populations, respectively.”

Thomas said that the high number of recent reports might be the result of factors other than student misconduct. She suggested that outreach efforts on the part of the Honor Council have encouraged community members to report infractions.

“I think we’re seeing more folks coming forward, in terms of faculty or even students, when they’re concerned about either what they’ve observed as a bystander or what faculty themselves have experienced,” Thomas said. “I think the Office of Student Conduct, in addition to the Honor Council members themselves, … have been doing a lot more in terms of outreach and communicating the importance of maintaining academic integrity and standards in our community.”

She also added that efforts to educate students about academic ethical standards have helped students from different educational backgrounds comply with the Honor Code.

“Most of our casework involves academic integrity,” Scruggs said in an email. “Our Council finds that when students seek resources on campus, such as the Tribe Tutor Zone or the Writing Resource Center, and reach out to their professors for clarification regarding citations and rules surrounding collaboration, they avoid potential honor code violations. In addition, increased use of technology (specifically smart phones) has played into a number of our cases.”

Gilbert emphasized the importance of peer accountability for the student-led honor council.

“Peer accountability can be a powerful tool to ensure that all students are protected under a common code,” Gilbert said in an email. “My anecdotal experience is that peer influence is a more powerful tool than messaging from faculty or staff. I also believe it is important for students to view behavior through their own lens — we all live within the community here at William and Mary, but for students, this is their academic, co-curricular, and living experience, so one could argue that the community is experienced most powerfully by them.”

Thomas said that a student-led Honor Council enhances accountability, but it also reflects a student culture that is concerned with academic integrity.

“I am a believer that when members of a community have the opportunity to uphold not only our values but our community expectations … with your peers, it does make it stronger and it makes it more intentional about who we are and how we conduct ourselves, not only in spirit but also in practice,” Thomas said.