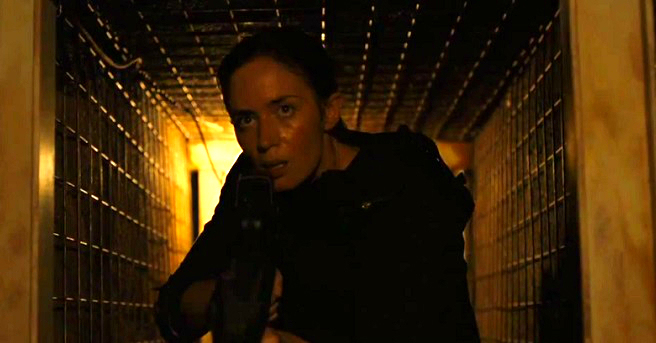 In Mexico, Sicario is a word for hitman; it is also the title for Denis Villeneuve’s latest film. The majority of “Sicario” takes place in arid landscapes where, like the water, law and order have dried up. Kate Macer (Emily Blunt) is an FBI agent specializing in kidnappings who has just led a raid on a house in Arizona filled wall to wall, literally, with bloody corpses. The raid also resulted in the death of two police officers. In order to exact revenge on the men responsible, she agrees to get onboard with a Department of Defense joint operation with Matt Graver (Josh Brolin) and his steely-eyed colleague Alejandro (Benicio del Toro). An outsider to the inner workings of the cartel, Kate asks Alejandro if there is anything she should know. His response is, “You’re asking me how a clock works. For now let’s just keep an eye on the time.”

Solely diegetic sound accompanies the majority of the film, and loud noises are sparse between conflicts; thus, moments of gunfire sound louder and feel more intense.

Silence is the defining element in “Sicario.” Solely diegetic sound accompanies the majority of the film, and loud noises are sparse between conflicts; thus, moments of gunfire sound louder and feel more intense. The background music in the film, composed by the award-winning Jóhann Jóhannsson, is only cued to build up a scene. The most suspenseful moments occur when people just stare at each other, or sign a piece of paper in complete silence. This style of filmmaking is a far cry from the constant noisiness of most action movies released today, and boy is it refreshing. The quiet scenes allow the viewer time to consider the movie’s poignant message.

In a scene near the end of “Sicario,” a group of soldiers (including Macer, Graver and Alejandro) descend a hill into hostile territory. The silhouettes of armor-clad operatives are consumed by the blackness against the backdrop of a beautiful desert sunset. As far as the audience is concerned, there are two worlds that exist in “Sicario”: one is defined by law and procedure, and the other by competition and havoc. Each has a measure of justice that must be exacted. “Sicario” brings into question the means by which order is achieved in the chaos.

“Sicario” brings into question the means by which order is achieved in the chaos.

Brolin turns in a familiar performance as Graves, a smug Texan reminiscent of Llewelyn Moss from the Coen Brothers’ masterpiece “No Country for Old Men.” Equally convincing as Alejandro, del Toro is a poised assassin with a knack for interrogations and a surprising amount of depth. Blunt delivers an inspired performance as an embattled idealist. Her character, Kate, must either come to terms with unforgiving realities or cling to her principles in the face of certain death. Additionally, one of the secondary characters in “Sicario” is a corrupt Mexican cop named Silvio (Maximiliano Hernández). In most action thrillers, Silvio wouldn’t have a backstory, simply serving his role as a nameless bad guy. In “Sicario,” however, Silvio is not only given a name but also a home, a wife and a son. The audience is given a window into what his life is like in the small town of Nogales. For a movie essentially titled “Hitman,” this complexity is surprising.

“Sicario” is a complex, intense and culturally important film that isn’t afraid to test the boundaries of the war on drugs. It is the best film I have seen so far this year.