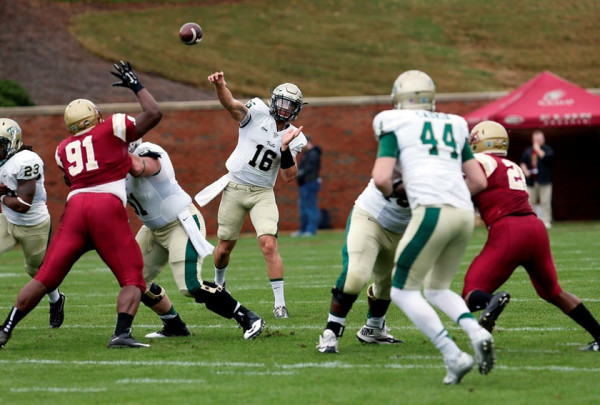 Going against a hot Towson team, I was pretty concerned about William and Mary’s first drive starting at its own three-yard line. Senior running back Mikal Abdul-Saboor gained a couple on first down, but it didn’t look like the Tribe could escape its own red zone by rushing against the tough Towson defense anticipating a handoff. Yet throwing out of the end zone just seemed too risky.

Head coach Jimmye Laycock ’70 didn’t think so, as sophomore receiver Daniel Kuzjak took off down the near sideline on a fly route, a defender in his back pocket. Junior quarterback Steve Cluley took a three-step drop and fired the long arcing pass against near-perfect coverage.

But the flawless throw dropped into Kuzjak’s arms at the 50-yard line, the receiver catching it in stride as the cornerback jumped for the ball just beyond his reach. Right then I knew the College could trust its gunslinger to win the game.

The most acclaimed position of the sport had received the least credit for the Tribe’s five-game winning streak.

The most acclaimed position of the sport had received the least credit for the Tribe’s five-game winning streak. All that changed in the brisk November wind at Zable Stadium, as Cluley led the way to the sixth-straight win and eighth-overall victory for the College in a pristine performance, finishing 21 of 23 for 262 yards and two touchdowns. For his stellar day in the pocket, Cluley received Colonial Athletic Association Player of the Week honors and set a program record for single-game pass percentage at 91.3 percent.

As the first full two-year starter under center for the College since Jake Phillips ’09 led the Tribe offense from 2007-2008, Cluley’s experience has paid dividends in his second season as quarterback, as the Tribe has been able to open up the playbook with more passes down the field. With one more game to play in the regular season, the Tribe’s passing attack already has 159 yards more than the 2014 season. Cluley has two more touchdown passes than he did in 2014 and two fewer picks to make for an impressive statline: 182 of 282 for 2,223 yards and 13 touchdowns versus just a pair of interceptions. His 64.5 percent completion rate in 2015 is a major upgrade from his 57.1 percent completion rate last season. Add in his nine rushes for 42 yards and three touchdowns and you’ve got yourself a talented weapon at quarterback.

Cluley’s ability to limit turnovers is a major piece of the Tribe’s No. 1 rank in the CAA with the turnover differential of positive 12, seven turnovers greater than the No. 2 team in the conference.  Combine ball security with the No. 3 passing attack and you’ll see a big reason why the Tribe is the top team in the conference heading into Richmond next week. Of the six passers in the CAA who have played 10 games, Cluley has the fewest picks, while his Richmond counterpart Kyle Lauletta has tossed 10 interceptions.

Of course, the other big reason the Tribe finds itself in first may receive less credit than Cluley has, although flattery of the quarterback has not historically been in vogue. This other under-appreciated reason is actually five reasons; sophomore left tackle Chris Durant, sophomore left guard Connor Hilland, senior center Andrew Jones, junior right guard Domenic Martinelli, and junior right tackle Jerry Ugokwe. The Tribe offensive line has allowed the fewest sacks in the CAA and pushed defenses around for the third-most rushing yards in the conference. Call it a bold prediction, but I call it common sense — all five of these guys will get All-CAA accolades of some sort at the end of the season; Jones and Ugokwe at least should be first-team.

Combine ball security with the No. 3 passing attack and you’ll see a big reason why the Tribe is the top team in the conference heading into Richmond next week.

With all day to throw, Cluley found junior receiver Kevin Hart first along the backline of the end zone, and later up the seam for two touchdowns. Cluley never ran, but he also never had to, as the Tigers couldn’t so much as lay a finger on the quarterback.

The running game is still good; don’t get me wrong. And the defense, although maybe not as solid as some would’ve hoped, deserves a lot of credit for that victory over Towson (still want to see more of a pass rush though). But Cluley and the offensive line should be that differential advantage that no other team in the CAA can match, and, pending the Richmond game, perhaps the class of the conference. William and Mary is currently No. 1 in the CAA; Cluley and the men blocking for him are a huge reason why.