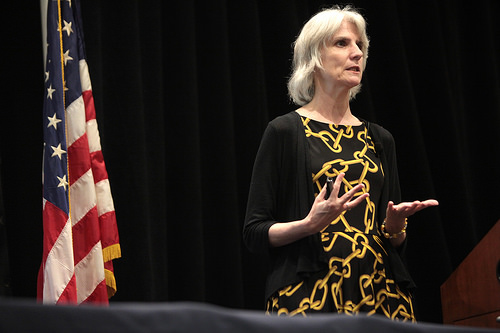 Catherine Sevcenko, associate director for litigation at the Foundation for Individual Rights in Education, came to Ewell Hall Nov. 11 to discuss free speech and academic freedom. In Sevcenko’s talk, she provided a legal and moral defense for allowing free speech in public universities and analyzed recent national events at such educational institutions as the University of Missouri, Yale University and the College of William and Mary.

The event was hosted by the Society for the College, an independent association of alumni and friends of the College whose stated mission is to promote good governance at the College.

FIRE is a nonprofit educational foundation whose mission is to defend and sustain First Amendment and due process rights in American higher education. According to Sevcenko, FIRE spent its first 15 years as a watchdog organization, working with administrators, students and media to encourage colleges to allow free speech.

“At the high-water mark, about 80 percent of colleges had unconstitutional speech policies,” Sevcenko said. “[FIRE’s activities] got the number down but not far enough.”

Thus, in the last year and a half, FIRE has begun a litigation project, filing suits against 10 schools and settling seven cases for around $350,000 in attorney’s fees and damages.

“What we had found is that students don’t know their First Amendment rights; administrators are happy to … interpret legal doctrines in a way that allow them to suppress free speech, and there’s no cost to that,” Sevcenko said. “So we have decided that if you find a student whose rights have been violated, if that student sues, then the school is facing bad publicity, litigation costs and damages.”

Sevcenko said that many of these cases involved “free speech zones,” where students are required to restrict their public expression to specified areas of campus. She said that the College has one of the 23 “green light ratings” from FIRE for its speech policy.

In her talk, Sevcenko began by explaining and defending the legal status of free speech in public universities.

“There is no legal definition of hate speech,” said Sevcenko. “I think everybody thinks of it as saying something offensive. It’s using epithets; it’s saying rude things to people. All of that is true, but all of that is protected by the First Amendment. The purpose of the First Amendment is not to protect nice speech. Nice speech doesn’t need protection … The problem comes with something you don’t want to hear.”

Later in the speech, she went on to criticize Mizzou’s police department, who recently released an email asking students to report hurtful or hateful speech.

“Particularly on a college campus, the idea that one group should be silenced at the will of another group is anathema to everything that a university stands for,” Sevcenko said.

Sevcenko added that public universities are an extension of the government, and that they are therefore legally bound by the First Amendment. She also discussed the limits of free speech: defamation, obscenity and true threats, which the Supreme Court has addressed in the past.

Sevcenko went on to discuss several national issues and themes. She challenged the concept of trigger warnings on the grounds that they allow students to avoid uncomfortable issues.

“Trigger warnings are deeply problematic, from our perspective,” Sevcenko said. “For people that have a diagnosis [of PTSD], shielding them is actually one of the worst things you can do. Avoidance of whatever it is traumatizing them is really considered to be a symptom of the disease, not something that is done to help them. So the basic scientific premise is off … What trigger warnings end up being is ‘Oh, here is a topic that is difficult,’ and it becomes basically an intellectual get-out-of-jail-free card.”

This point provoked a response from the audience, some of whom thought trigger warnings should be preserved to warn people about upsetting content, not to let them avoid discussion.

She also mentioned the recent incident at the College in which someone covered the Thomas Jefferson statue with sticky notes.

“I actually think this is kind of fabulous … not so much because of the stickies, although I think that’s kind of humorous, but because of the discussion that it generated on Facebook,” Sevcenko said. “When this picture was put up on Facebook, all sorts of comments came up, and I think this is a real tribute to William and Mary … A really good conversation came out of it.”

Students at the event said they found Sevcenko’s lecture thought-provoking.

“I disagreed with her idea that trigger warnings were against the First Amendment,” Jeff Diamond ’15 said. “I liked her idea about the Thomas Jefferson statue as something that generated discussion, because when I saw it, I just thought it was obnoxious.”

Faculty also responded to the event. Paul Davies, who is on the Board for the Society for the College and teaches philosophy on campus, said that Sevcenko raised important concerns. Davies said that free speech concerns were relevant to the College’s harassment policy, which prevents students, faculty and administrators from creating a “hostile environment.” Davies argued that this concept of harassment is poorly defined and subjective, and could potentially be used to restrict free speech.

Davies mentioned an incident in the philosophy department in which he felt students and administrators were overly sensitive.

“It can be a slippery slope, so somebody uses the word ‘retard,’ in a perfectly appropriate way [to talk about slowing something’s progress], then all the faculty are sort of being warned,” Davies said. “Presumably at least one student complained because he or she didn’t like the word ‘retard,’ and somebody at the administration thinks that it’s their responsibility to rein us in. No it is not, in fact, you don’t even have the right to rein us in.”

Davies also weighed in on the sticky-noted Thomas Jefferson statue.

“It was stupid. It was ignorant. But it was expression of free speech,” Davies said. “I think that public conduct by people that are clearly so ignorant is distasteful, but I sure as heck agree that people have a right to say that.”

Philosophy professor Noah Lemos commented on the importance of free expression in the classroom.

“I teach a course on contemporary moral problems and we discuss very important issues like abortion, affirmative action and immigration, and I think that the professors and student alike need to feel free to express their opinions and to challenge other people’s opinions without any fear of intimidation by groups on campus, by students or by anyone in the administration.” Lemos said. “That kind of freedom to give and assess arguments is at the core of what we do at the university.”