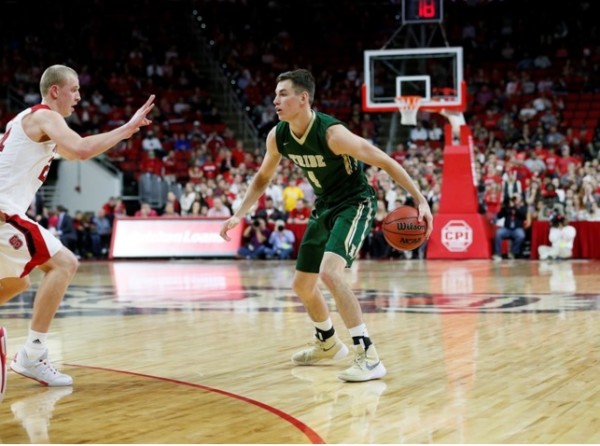 After the 17-point upset by William and Mary over North Carolina State, the Tribe played a surprisingly close game against the Liberty Flames in Lynchburg, Va., ultimately taking the victory 70-59 Tuesday night. With the win, the College improves to 2-0 two-game road win streak to start the season for the first time since 1945.

The story of Tuesday is much different than that of last Friday, as the game was kept close for much of the game before the Tribe’s eventual breakaway run. The College split its scoring evenly at 35 apiece for each half (2-0), but the first half saw missed scoring opportunities, while  the second half featured better defensive awareness.

“Psychologically, it was a difficult game to play in a lot of ways because the world has been telling our kids how good they were after that performance,” head coach Tony Shaver said to Tribe Athletics. “They didn’t play great in the first half but really responded in a positive way.”

In the first half, the lead changed several times, Liberty (2-1) actually holding the advantage at the halftime buzzer. With seven minutes and 42 seconds left, the Flames sent a lay-up into the net for the go-ahead points to make the score 22-21. Senior forward Terry Tarpey quickly responded with a lay-up of his own to make it 23-22 with the Tribe ahead. After that shift in power, the College began a 6-3 run to cushion the lead at 29-25, but the run was plagued by a missed three-pointer by junior guard Daniel Dixon that would have had the game tied at the break. Liberty fought its way back, and took the lead with a shot in the paint by Liberty forward Ryan Kemrite, the score now 35-33. Senior forward Sean Sheldon banked in a lay-up to tie it up at 35 with 35 seconds in the half, and it looked like the first part of play would end at a stalemate. Kemrite then shot from beyond the arc as time expired, the shot went in, and Liberty had a three-point advantage that stung the Tribe heading into the locker room.

Psychologically, it was a difficult game to play in a lot of ways because the world has been telling our kids how good they were after that performance,” head coach Tony Shaver said to Tribe Athletics.

The second half was a new ballgame, the College appearing to have regrouped and focused. Junior forward Omar Prewitt came onto the court and stormed to a field goal and one as he drew the foul driving into a Flames defender. The free throw good, the score now read 38-37. Kemrite couldn’t repeat his first half heroics, missing a three and leaving Prewitt for the rebound and subsequent go-ahead lay-up. Flames guard Anthony Fields hit a lead-changing lay-up of his own to reach the 40-point mark, but Liberty would never lead again after Dixon’s successful jump shot with 18:07 to go.

The Tribe opened up in the second half, taking as high as a 12-point lead with just over two minutes remaining. After Liberty hit 40, the College had a 14-4 run to take a commanding 53-45 lead, the run featuring a pair of Sheldon shots from the paint,  a Tarpey lay-up and points from the younger players  as sophomore forward Jack Whitman and sophomore guard Greg Malinowski both contributed coming off the bench.

“Held them to 21 points in the second half, our bench was really key today,” Shaver said to Tribe Athletics. “Mike Schlotman, Connor Burchfield, Greg Malinowski, Jack Whitman, I could keep going, but those guys were the key to our success tonight. They gave us a huge part in both ends of the floor.”

The lead extended to 12 later in the second half after a brief Liberty rally,as Malinowski was fouled and sank two free throws for the 66-54 lead. By that point, the Flames had fallen out of the running and drew fouls and shot from risky angles; they were held to just 21points after the explosive first half. Ultimately the Tribe prevailed on the road 70-59, Prewitt scoring the last points with a pair of foul shots with 18 seconds left.

Prewitt led all scorers with 16 points. Defensive rebounds outmatched offensive rebounds by a 31-7 margin for the Tribe, Tarpey grabbing seven of the defensive boards and tying at eight overall with Dixon and Malinowski. Prewitt, Sheldon and sophomore guard David Cohn each led with three assists.

Beyond the game itself is the tale the stat sheet shows. The College had 12 turnovers to the Flames’ seven. The Tribe had 22 bench points to Liberty’s two. According to Shaver, the bench played more in sync with one another than Tuesday’s starting five.

“Our starters kept trying to do stuff one on one tonight, which is unusual for those guys, but we didn’t play as well as a team — that first unit, tonight — and I think the second came in and fundamentally got things done for us,” he said to Tribe Athletics.

Good teams find a way to win when things aren’t going your way, we talked about that at halftime,” Shaver said to Tribe Athletics.

The mistakes made did not cost the game due to the performance of the younger guys, but that bailout is not likely to occur every time if the Tribe continues to find itself down early. Starting 2-0 looks strong, but increasing the streak will make this team look more formidable than a team that was down to the underdog at halftime in Lynchburg.

“Good teams find a way to win when things aren’t going your way, we talked about that at halftime,” Shaver said to Tribe Athletics. “It’s not always going to be perfect for us. We were terrific Friday night, we were okay tonight in that first half, but to respond the way we did, to show toughness on the road, to show the resolve we had on the road tonight to pull out a win against a team that played really hard and really shot the ball well.”

William and Mary returns to Kaplan Arena for the home opener tonight to host Washington Adventist. Tipoff is scheduled for 7 p.m.