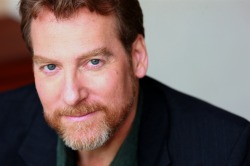 The booming voice of Jamieson Price ’84 is a characteristic that has distinguished his professional acting career. He has lent his deep and radiating voice to portray a wide variety of characters in the world of video games, film and anime.

“I’ve been an actor my whole life,” Price said. “For as long as I can remember, the exploration of someone else’s mind through a representation of character has always fascinated me.”

Price graduated from the College of William and Mary more than 30 years ago as a theatrically immersed psychology major. He is now a Los Angeles-based voice actor and technical director. Price has worked across the country on stage, screen and in recording studios for over 25 years.

“I’ve been an actor my whole life. For as long as I can remember, the exploration of someone else’s mind through a representation of character has always fascinated me.” — Jamieson Price

Growing up during the peak of the Cold War space race, Price said he strived to be a NASA astronaut when he was young. Despite this initial interest in science, Price said the arts always came more naturally to him. Price was involved in many school theater productions, and said people would constantly comment on his voice and his potential. Price also said that his teachers and directors motivated him to keep practicing. He said he persistently pursued the theatrical arts until the real world hit.

Entering the College as a freshman, Price said he was planning to major in psychology and minor in science-oriented statistics. Price also worked at the King’s Arms Tavern in Colonial Williamsburg after classes. During the first few months of college, Price was still able to find time to be actively involved in the theatre program on campus. However, as the academic course load began piling on, he said the reality of collegiate time constraints hit him. He said this made him realize that the commitment necessary to perform in theatrical productions was interfering with his academic pursuits. After much contemplation, he decided to stop acting.

Price said he missed performing during his period of theatrical withdrawal.

“I definitely knew there was something missing from my life throughout that time,” Price said. “I constantly questioned my true intentions. Deep down I wanted to believe in my original career plan, but it was a constant struggle between mind and heart.”

Price said he was able to finally understand his passion for performance and psychology because of how much he missed it.

“Theatre is a way of exploring psychology,” Price said. “By entering the psyche of another character, you’re allowed to explore various aspects of yourself embodied within them.”

Price said that acting on stage was an opportunity for him to utilize his vocal range and projection in an attempt to evoke empathy within the audience.

During Price’s senior year at the College, the director of performance for the Historic Triangle offered him a job. He accepted the offer and began working in Williamsburg and Yorktown as a colonial reenactor for the living history exhibit. Price said the primary sources and journals available in Earl Gregg Swem Library helped him in gathering background information to make the characters believable. He also credited the theater and history classes taught by professors at the College for allowing him to excel as a realistic representative of a historical character.

“My time involved in William and Mary’s student productions allowed me to explore a diverse range of characters and actions,” Price said. “The theatrical immersion, stage work, and exploration of different aspects of myself, which was learned through technical and on stage theater work, allowed me to get my big break and begin my acting career.”

After graduation, Price was invited to join the director of performance from the Historic Triangle as she started her own production company in Ohio. He spent a few years doing outdoor drama there, working for her and playing lead roles most years. Price said these years of practice allowed him to perfect his technique. Price was also actively involved in the costume, lighting and technical design aspects of the production’s performances, which he said were skills he learned from the technical director of the College’s theater program during his time as a student.

Price eventually moved to Long Beach, California after his time in Ohio and immersed himself in the performing arts culture of the West Coast. He started looking for acting work in Los Angeles, and soon enough he had landed a role as a dancer for a Dylan Thomas show. He met his wife, who was also an actress for the show, during his time there. They have been married for 20 years and have two children together.

“As Captain Borden in The Patriot film with Mel Gibson I definitely drew from my William and Mary experience as it was set during the Revolutionary War. Although he was a British officer, my Colonial Williamsburg and Yorktown history helped a great deal.” — Jamieson Price

Since then, Price has had various roles in movies and anime productions. Some of his most prominent work includes the role of Captain Borden in The Patriot, and Ermac in Mortal Combat X. He has also voiced various other characters in Final Fantasy VII, Naruto, Metropolis, Redline and Bleach. His most recent work includes doing the voice overs for characters in the Call of Duty: Black Ops, Mortal Combat X and Diablo III video games.

Price said that he drew on his College experiences in his professional roles.

“As Captain Borden in The Patriot film with Mel Gibson I definitely drew from my William and Mary experience as it was set during the Revolutionary War. Although he was a British officer, my Colonial Williamsburg and Yorktown history helped a great deal.”

He offered some final words of advice to current students at the College.

“Be open to anything and everything. College is the best time to explore,” Price said. “Explore yourself and those around you. There’s always a choice to do something, so do what you’re most passionate about. Don’t be afraid to stretch out from the safety net of what is known because college is a save haven … it is a wonderful time to explore and find passionate personal bliss.”