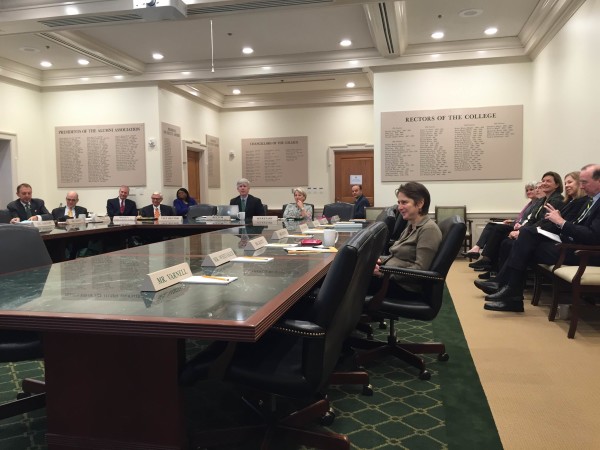 The Board of Visitors Committee on Administration, Building and Grounds convened Thursday, Nov. 19 to discuss the Virginia Institute of Marine Science, a new resolution and the security of governmental facilities.

Chair of the Committee Ann Green Baise opened the meeting with a motion to approve the minutes. She then discussed the status of campus construction.

“Everything seems to be going along smoothly on the campus, buildings are rising, buildings are being finished, and lots of completion documents were issued,” Baise said.

Baise then introduced the first speaker, Virginia Institute of Marine Science Director Dean John Wells. Wells presented the VIMS’s research vessel and the impact of Hurricane Joaquin and the Norin early October. He began by showing 3D images of the design for the new research vessel.

“We are developing what’s called an RFQ which is a ‘Request for Qualifications’,” Wells said. “This will be sent out to shipyards, the shipyards will respond through that advertising and based on our assessment with the qualifications, the write ups that we get back from those who respond, we will develop a short list and send out an RFP, ‘Request for Proposals’, from that short list. Then what will happen is we’ll get those proposals back, we’ll make a decision as to who to interview, we’ll call in ship yards for interviews and we’ll make a final decision, which will be based on best value.”

Wells said that they are developing the vessel to a 60 percent design level and that the shipyard with the winning bid will take up the remaining 40 percent of the design and the vessel’s construction. He believes that the vessel will be delivered to VIMS by the latter part of 2017.

In response to the Hurricane Joaquin and Nor’easter, Wells noted that there is always concern with any major weather event approaching the VIMS site. The shoreline there is low, and some buildings may not have the stability to withstand more than a Category 1 hurricane. He then showed a series of before and after pictures demonstrating the effect severe weather has on the VIMS site. These included images of the concrete pier, Coleman Bridge, the VIMS oyster hatchery and the Eastern Shore Laboratory.

At the end of his presentation, Wells also talked about the Healthy Bay for Healthy Kids event run by VIMS each year. Through this program, the First Lady of Virginia interacts with second graders from local schools, where the students can learn about the connections between human health and marine life.

Vice President of Finance and Administration Sam Jones ’75 MBA ’80 spoke next. He stated that there were no dramatic changes in construction since the committee had previously met in September of this year, and presented Resolution 10.

“That is to approve an easement for Virginia Power Dominion Resources so that they can put in a transformer to service the new football stadium additions,” Jones said. “They already have one easement there that’s 15 feet wide, they need to go outside of that in order to actually get the utilities into the new facilities.”

The committee approved the resolution, and Baise then moved the committee into closed session to discuss reports or plans related to the security of governmental facilities and the safety of those using those facilities or buildings.

The meeting was closed at around 2:15 p.m. and remained closed until the session’s conclusion.