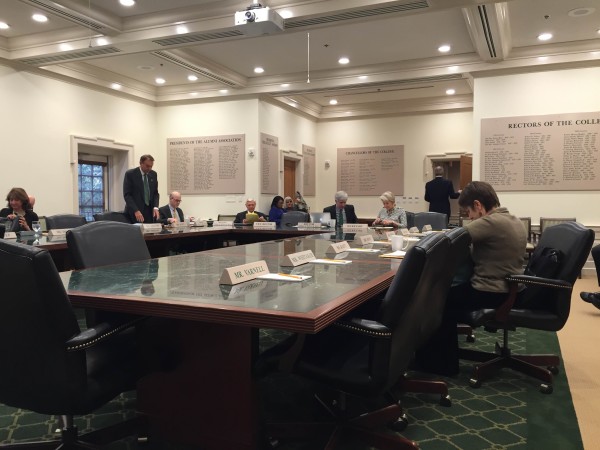 The Board of Visitors Committee on Academic Affairs convened Thursday Nov. 19 to discuss early decision applications, the COLL curriculum, the College of William and Mary’s reaccreditation process, an update from the Faculty Assembly and the St Andrews Joint-Degree Programme.

Following approval of last meeting’s minutes, Provost Michael Halleran gave the committee an update about early decision applications for the Class of 2020.

“Total numbers down a smidge by 4 or 5 percent, but that’s just kind of normal fluctuations,” Halleran said. “They are in a process for reviewing the applications as we speak.”

Moving on to the COLL curriculum that was implemented this fall for the Class of 2019, Halleran said he is pleased with the success of the program thus far.

Halleran also gave an update about the “self-study” the College recently sent to the Southern Association of Colleges and Commission on Colleges. As a SACSCOC institution, the College submits a comprehensive report every 10 years for a full accreditation review. As part of the 2015-2016 review, the College will soon receive feedback and recommendations from an off-site peer review on the report.

In light of the January 2016 deadline, Halleran discussed the current work on the Quality Enhancement Plan, a part of the reaffirmation process in SACSCOC that describes the College’s work on enhancing student learning and the environment of student learning.

Committee Chair Robert Scott J.D. ’68 asked Halleran about the value of self-studies for the university besides creating additional work for university administrators.

Halleran agreed that compiling the reports took a large amount of time due to the complexity and breadth of the study.

“They make it awfully complicated,” Halleran said. “So in terms of overall whether this is a valuable exercise— no. Are there some things of value that come from it? Yes.”

Faculty representatives discussed work by the Faculty Assembly on developing a program to help integrate new diverse members of faculty into the College. There was also discussion about the amending of the Discrimination Grievance/Complaint Procedures, a procedure that seeks to help the university enforce policy on discrimination, harassment and retaliation.

“Our enrollment target is five students in each major per year, per university,” Kennedy said. “We’ve been fairly successful at meeting those targets for the past two years and when we enroll there’s a little bit of transfer back into either William and Mary or St Andrews which is why we’re not — we have 115 students currently at both universities — so currently we’re not fully enrolled, although we’re getting better and better about keeping students in the program.”

The Joint Degree Programme is in its sixth year of existence and it graduated its first class in spring 2015. The program currently allows students to major in economics, English, history and international relations. Kennedy said the program is exploring expanding to two additional majors and targeting the 2018-2019 academic year for implementation.

“We put out the call for applications for all Arts and Science departments in September and the first proposals are due January first,” Kennedy said. “So I have an idea about some that are in mind. There’s a few.”

Kennedy told the committee that potential majors would not be revealed at this time.

The students discussed the challenges presented by moving between universities, the differences in instruction style between institutions as well as the advantages to them of being in the program.

“I think nationally, if you’re in the United States you feel a strong pull towards William and Mary after graduation,” Cooper Nelson ’16, a St Andrews Joint-Degree student, said. “That being said, St. Andrews does have a very broad and a very connected alumni network. This past summer, I was working in D.C. and was able to attend alumni networking events not just for William and Mary, but for St Andrews as well. So I think just how William and Mary has a broad international base of network, St Andrews has that — they’re based across the ocean — but both networks are strong and cohesive.”

The committee moved into a closed executive session for the remainder of the time to discuss personnel issues.