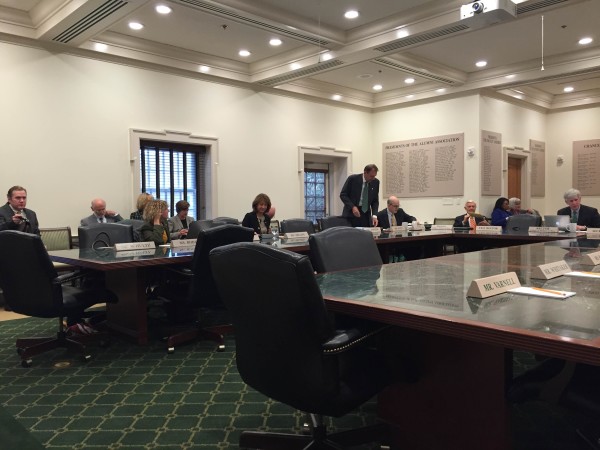 The College of William and Mary’s Board of Visitors Committee on Strategic Initiatives and New Ventures gathered the morning of Nov. 19 in Blow Memorial Hall with Chairman Thomas R. Frantz calling the meeting to order.

Vice President for Strategic Initiatives Henry Broaddus opened the meeting by discussing new efforts to increase interest in the College amongst prospective students who are still in high school. He stated that admitted students receive a packet with a series of cards, called “view books”, featuring photos and phrases associated with the College. He announced that 15,000 of these view books will be distributed later this year in order to galvanize interest in the College.

“This will be targeted to an in-state audience,” Broaddus said. “This has been very well-received.”

Broaddus then moved into a presentation detailing the “William and Mary Promise,” a campaign designed to attract prospective in-state students. The “Promise” is a five-fold initiative. The first aspect of this commitment is the guarantee to connect students to world-class faculty members.

“Personal attention is a hallmark of William and Mary education,” Broaddus said.

The second part of the promise is that students who attend the College will be able to achieve their dreams. The third aspect is that students will be given the opportunity to do great things with great people. The fourth part is the legacy of excellence the College upholds with both its administrative leaders and alumni.

The fifth and final part of the promise is that students will not be able to find a better investment for in-state schools. On this point, Broaddus cited that since 2013, in-state students are paying 14.3 percent more in 2015 to attend their institutions; the cost of attending the College did not change in that period of time.

Broaddus also stated that the College boasted the third-lowest net price in the state.

Rector Todd Stottlemyer ’85 mentioned that other schools in Virginia cited that College graduates often did not make substantial amounts of money upon graduation, especially in comparison to the cost of attending the university. Broaddus stated that this type of pay scale data was oftentimes the subject of manipulation. Stottlemyer agreed with this point.

“There is intense data manipulation going on. In a time of short attention spans, unfair value is often described in economic terms,” Stottlemyer said.

Next, Broaddus delivered the University Dashboard Update. He showed data on matters like student-professor ratio and average SAT score of admitted students. He also revealed that the College is the leading public university for the percentage of students who study abroad.

After Broaddus’ presentation, Frantz delivered the Regional Activity Update. He reviewed several aspects of the agenda that were going successfully, such as the widening of Interstate route 64 and the deepening of a local channel to 55 feet. He also discussed future ventures, including support of the “GO Virginia campaign”, which seeks to accelerate and diversify the state’s economy. Two days ago, Frantz spoke to a large assembly of business professionals about the venture.

“[There was] overwhelming support,” Frantz said. “Within two hours, it hit as a lead story in Virginia Business Magazine.”