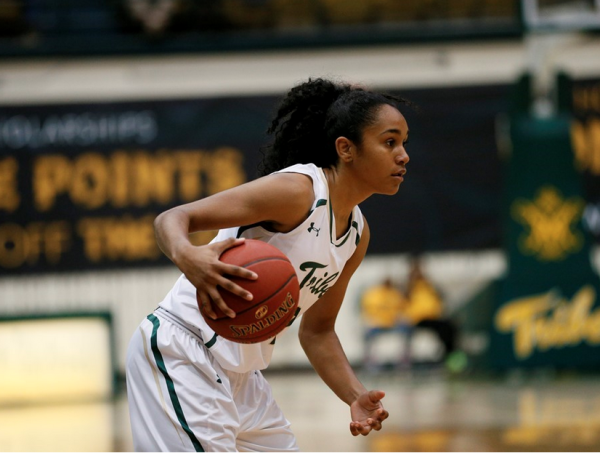 One second loomed on the clock above the backboard in the fourth quarter at the Reitz Arena in Baltimore. Freshman guard Bianca Boggs stood at the foul line flanked by fellow William and Mary players as well as those from Loyola, as the score sat tied at 61. Boggs took the first free throw, a miss. Focusing intently, she took a moment before the second shot, and tossed it up. A swish was heard as she made the game-winning free throw.

Continuing a two-game road trip, the Tribe (3-1) played a tight matchup against the Greyhounds (2-3) Monday night, taking the victory 62-61.

“We gutted it out,” head coach Ed Swanson said to Tribe Athletics. “That’s something this team is learning — how to win, and this was a big win for us.”

After the first quarter, the College was down 19-16 as Greyhound guard Colleen Marshall hit a shot from range at the nine-second mark. Of the Tribe’s points, 14 were in the paint, outmatching Loyola by 10 points at close range. The lead was exchanged several times, the Tribe getting the first points with a lay-up from sophomore center Abby Rendle.

We gutted it out,” head coach Ed Swanson said to Tribe Athletics. “That’s something this team is learning — how to win, and this was a big win for us.”

The College started the second quarter with a 7-0 run over the first two minutes. Freshman forward Ali Engelhardt netted a pair of foul shots and a three-pointer before junior forward Alex Masaquel sank a pair of free throws, while the Greyhounds failed to make a lay-up and two free throws during the same span. Before the half, a 12-6 run put the Tribe ahead through the end of the quarter, the low Greyhound scoring established through turnovers and rebound control as well as consistent shooting.

William and Mary led 35-25 with 56 seconds left in the half as senior guard Brooke Stewart hit a shot beyond the arc for the 10-point lead. Loyola had several chances to score in the final minute of the half, but missed three close shots and one from range before the College grabbed a defensive rebound before the buzzer.

After the break, the Tribe took its largest lead of the night, holding a 14-point advantage 44-30 with 5:54 to go in the third quarter. The Greyhounds slowly but surely cut the lead to as low as four at the 30-second mark before junior guard Marlena Tremba hit a free throw for the five-point lead at 50-45 going into the final quarter.

Both teams exchanged buckets in the final 10 minutes, but Loyola outscored the College on its way to tying the game at 56 and 58. The Greyhounds gained the lead after 58 points with a successful three-pointer before the lead was cut to one with a Masaquel jumper from the paint. The score now 61-60 and 45 seconds remaining, every play counted. Masaquel missed a free throw, but Marshall missed a potential game-changing three pointer. After one of two Tremba foul shots went in, the score was tied at 61 with nine seconds to go. Boggs, just subbing in as Loyola took a timeout, made a block on another Loyola three-point attempt, made the defensive rebound and was fouled, bringing the game to a must-make opportunity at the line, which Boggs accomplished on the second free throw for the win.

“It was a game of runs,” Swanson said to Tribe Athletics. “I thought we put together a good second quarter and got a good start to the third quarter, and then Loyola came fighting back, they did a tremendous job.”

Just as the 2014 meeting between the College and the Greyhounds ended with a last-second lay-up to win 72-71, this year came down to late free throws, again ending the game by a single point.

It was a game of runs,” Swanson said to Tribe Athletics. “I thought we put together a good second quarter and got a good start to the third quarter, and then Loyola came fighting back, they did a tremendous job.”

William and Mary dominated in several categories Monday night, leading Loyola in points from turnovers (19-10), in bench points (17-9), baskets in the paint (38-20) and scores off fast breaks (10-2). Masaquel led the Tribe with 18 points and was one rebound from a double-double, grabbing a team-high nine boards. Sophomore guard Jenna Green put forth a strong supporting performance with a team-high six assists and five steals. Rendle led in blocks with two.

The Tribe was 0 for 6 in threes in the second half, bringing it to a 14.3 percent from range overall, while the Greyhounds shot 27.8 percent from beyond the arc. However, the College made 42.9 percent of its field goals as it went 24 for 55 while holding Loyola to 18 of 47, a 38.3 field-goal percentage.

The College’s next game is against American Wednesday night in Kaplan Arena at 5 p.m.