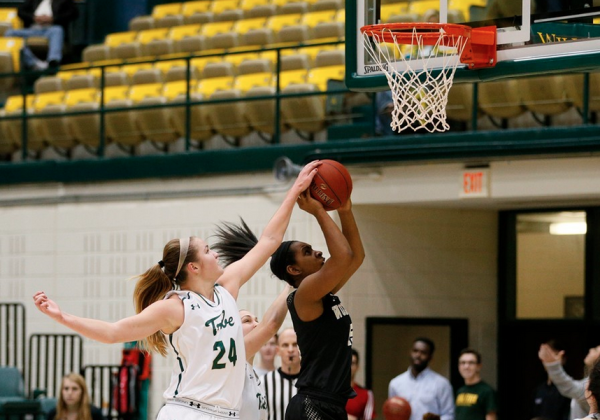 Continuing its three-game slate of Virginia teams, William and Mary faced Old Dominion for the final non-conference game of 2015 Dec. 29. After falling to Virginia Commonwealth in the previous game for only the second loss of the season, the Tribe (9-2) regrouped at home and surged to a 75-64 victory over the Monarchs (4-8) at Kaplan Arena after entering halftime down 14 points.

“It was just a great team win for us,” head coach Ed Swanson told Tribe Athletics. “I really think it was a breakthrough win.”

Starting the game trading small runs, ODU held the edge at the end of the first quarter by a nine-point margin at 23-14. The Tribe struggled to make its shots, and neither team was careful with possessions as each had five turnovers during the first 10-minute period.  Five missed shots from range and 10 close shots by the home squad  allowed the Monarchs to retain their lead entering the second quarter.

It was just a great team win for us,” head coach Ed Swanson told Tribe Athletics. “I really think it was a breakthrough win.

The College defense came alive after the quick break, only allowing nine points after allowing 23 in the first quarter. The Monarchs gained an 11-point advantage at the  8:51 mark, but the Tribe began to respond with better shot selection, cutting the lead to seven. With the game at 25-18, the Monarch offense and defense both stepped up, extending the lead to 32-18, a 14-point game, with a layup, three-pointer and free throws. The 7-0 run lasted from 6:57 to 4:39, until finally junior forward Alex Masaquel completed a layup down in the paint. ODU would not score for the rest of the half, missing four attempts from the arc and two inside. Free throws and layups allowed the Tribe to cut the Monarch lead to five entering halftime, the score at 32-27.

At the break, the turnover battle was even with the Monarchs at 10 and the Tribe at 11. The rebound battle was more one-sided, the College grabbing 29 to ODU’s 16, with the second chance shots mitigating the poor shooting on the part of the Tribe. Masaquel led the College with 10 points and six rebounds, while ODU’s Jennie Simms put up 16 points by the end of the half with five boards of her own. The Tribe’s shooting statistics were 12 for 37 in field goals, 0 for 8 for threes, and 3 for 4 from the charity stripe.

Coming out of the locker room, the defense was consistent but the offense stepped up, outscoring the Monarchs 24-9 in the third quarter. At 8:25, the Tribe took its first lead of the night by way of a layup from sophomore center Abby Rendle, the score 34-33. ODU fought back each time the College established a three-point lead, though eventually William and Mary was able to get a solid run after the game tied at 40. Junior guard Marlena Tremba made a jumper and was fouled, sinking the free throw after for the three-point lead. For a couple possessions, the teams exchanged turnovers before Tremba once again went to the foul  line, making one of two. Tremba continued to shine with a successful three-pointer to take their largest lead of the night at 47-40, with all seven points coming from Tremba. By the end of the third quarter, the College led by 10 at 51-41, allowing no points over the last 4:20 of the quarter.

The fourth quarter was the highest-scoring of the game, the teams combining for 47 points to end the game. William and Mary outscored ODU 24-23 in its rout of the in-state rival. The College kept the Monarchs 10 points or more away from the lead for most of the quarter, responding swiftly each time a basket was made. With 2:08 remaining it was all but determined who would win as a Tremba jumper gave the Tribe its biggest lead of the game at 13 points, the score 70-57. ODU fought to cut down the lead but missed crucial threes and fouled the Tribe, allowing more points via free throws, an area  where the College has shined in its first 10 games. William and Mary finished with an 11-point lead at 75-64.

The Tribe improved to 17 of 29 in field goals in the second half while shooting 3 of 6 from three and 11 of 15 in free throws. Overall ODU shot 38.5 percent from the floor to the College’s 43.9 percent. William and Mary’s 14 for 19 at the free throw line undoubtedly aided in the victory, as were the 53 Tribe rebounds to ODU’s 34. Team leaders were Tremba with 20 points and Masaquel at nine rebounds. Masaquel and Rendle each had 16 points, the former just missing a double-double by a lone board. Rendle completed 8 of 9 from the floor, the most accurate shooter of the night. She also had a game-high four blocks.

“This team just has a certain fight about it, and I thought we were really focused,” Swanson told Tribe Athletics. “I thought we took Old Dominion’s best shot in the beginning and we didn’t go away. They hadn’t taken our best shot yet and I thought we really came out in the second half, right from the start.”

The win completes the best non-conference slate in recent history, only falling to Richmond and Virginia Commonwealth for a total of nine wins. The Tribe’s Colonial Athletic Association schedule begins Jan. 3 against James Madison at Kaplan Arena.