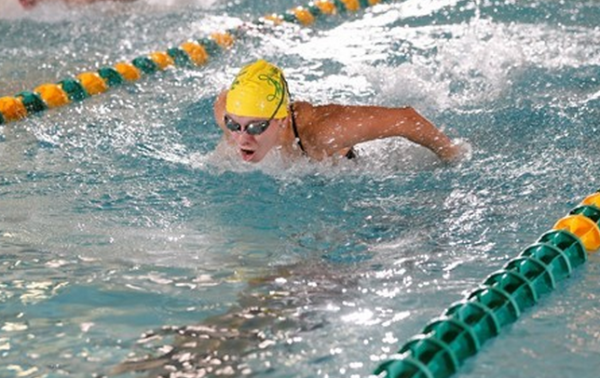 Dual-meet defeats to Eastern Carolina and South Carolina masked a set of strong individual performances, with the Colonial Athletic Association Championships on the horizon. The men’s team lost narrowly to both teams — 151.5-142.5 against East Carolina and 179-107 to South Carolina On the women’s side, the Tribe (6-5, 2-2 CAA) lost both matches as well, dropping to ECU 180-107 and to South Carolina with a 175-110 score..

Against No. 23 South Carolina, the College men’s team faced former Tribe head coach McGee Moody. Although the Tribe’s lack of a diving team potentially decided the ECU match, the College (7-3, 3-0 CAA) was no match for the Gamecocks, a team with 19 qualification times for the NCAA Swimming Championships in March.

However, the Tribe managed to take 13 out of the 28 total events, with strong performances by seniors Will Manion and Billy Russell. Manion could not be stopped in the two backstroke events, swimming  49.63 in the 100-yard back and 1:49.35 in the 200-yard back. The senior is 17-0 swimming backstroke in dual meets and is up to 20 wins on the season. Only 11 other Tribe swimmers have tallied as many.

On the women’s end, senior Jessie Ustjanauskas continued her dominant butterfly swimming, breaking her third dual meet record in three weeks. She zoomed to a 2:03.10 time in the 200-yard fly (breaking her own record, although she did not win) and won the 100-yard fly in 56.13 seconds, putting in a convincing bid to defend her third CAA Swimmer of the Week award, which she received last week in the win against Davidson.

Other swimmers also put in impressive individual performances. Junior Sophie Rittenhouse took home the 200-back in 2:02.80, while the Miller sisters teamed up to dominate the Gamecocks in the freestyle events (junior Jaimie winning the 100-yard in 51.89 and freshman Annie winning the 50 in 24.1).

For some of the team, just one race remains; the swimmers not selected for the CAA Championships will swim at the Carolina College Invitational February 5-7 at North Carolina, Chapel Hill. Front-runners such as Ustjanauskas, Manion and Russell will look forward to the CAA Championships in Richmond at the end of February.

The NCAA Swimming Championships take place in mid-March. No Tribe swimmers competed last year, but this year Manion has squeaked under the 100 back qualifying time by .02, making him eligible for the “B Standard” race in the event.

Depending on individual results in the upcoming competitions, other Tribe swimmers may join him in NCAA competition.