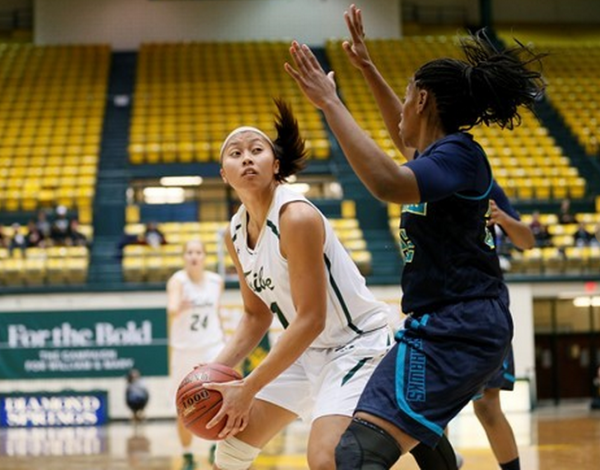 This weekend provided two very different answers to the same question: how would William and Mary (13-7, 4-5 Colonial Athletic Association) recover from losing sophomore center Abby Rendle, the team leader in points, blocks, and defensive rebounds, for the season?

On Friday, a dismal 55-51 loss to College of Charleston (7-11, 2-5 CAA) gave one answer. However, a resounding 69-62 victory over Northeastern (7-13, 2-7 CAA) delivered an entirely different verdict on the team’s potential for the remainder of the 2015-16 season. Even head coach Ed Swanson is unsure of what to expect.

“We’re learning on the fly; we haven’t practiced with four guards out there at the same time” Swanson said.  “Injury happens beginning of the year or preseason, you have time to fix it, when it happens at unfortunate times…[compensating] has to be a full team effort; we have to be scrappier. We’re not going to look at one player and say ‘Kasey Curtis you got to replace stats.’”

Rendle’s absence to a broken ankle was very noticeable against the Cougars Friday. The Tribe did not get into any sort of offensive rhythm until a brief spell in the third quarter. Charleston led at the end of the first quarter 17-14, and maintained the lead all the way to a 30-26 halftime margin. Though William and Mary shot decently in the first half at 35.5 percent, the Tribe faced a considerable rebound deficit, one which would grow to a final advantage on the boards of 49-33 for Charleston.

Of those 49 Cougar rebounds, 16 of them were offensive rebounds, allowing Charleston to tack on 14 second-chance points. The Tribe also committed 20 turnovers, despite having led the CAA in turnover margin for several weeks. In spite of the poor ball security, the College strung together a 9-0 run in the third quarter to briefly claim the lead. Freshman guard Bianca Boggs, who earned her first career double-double with 14 points and 10 boards, knocked down a three-pointer within the Tribe’s offensive burst.

A decisive lead proved elusive for both squads as the quarter ended in a 45-45 tie. With the game coming down to the wire, the Tribe doomed itself with a putrid 2 of 11 shooting in the final frame of the game from the field, losing 55-51. The College also didn’t produce from what was left of the team’s bench, adding just four points outside the starting five. Junior guard Marlena Tremba played the entire game, while Boggs played 38 minutes, reflecting the unpleasant reality of having three players injured: Rendle, freshmen forward Ali Engelhardt and sophomore guard Jeanne Gaumount.

“We couldn’t sustain any momentum,” Swanson said. “We rushed a great deal, we got to get back to work. It’s tough to play 40 minutes, but we’re different, we have to figure it out.”

Fast-forward to Sunday, and the Tribe looked to have figured a few things out, namely how to shoot from the perimeter. The College scorched the Huskies from the arc, hitting 10 of their 18 three-point attempts, tying the team’s best shooting percentage from three on the season at 55.5 percent.

The Tribe also reduced turnovers by half, a key improvement that was not lost on Swanson.

“When you minimize your turnovers, your defense plays better,” Swanson said. “Friday night, the turnovers were uncharacteristic. If you’re turning the ball over there’s a lot of three on two breaks, two on one breaks. Overall, [we had] better guard play.”

William and Mary and Northeastern played it close the whole way through. The College outscored the visitors 18-13 in the first quarter, only to be outscored by the same tally in the second quarter. The teams entered the fourth quarter tied yet again, this time at 49. Junior guard Latrice Hunter played a major role in the Tribe’s success, a new tactic in the Tribe’s strategy as Hunter, normally a point guard, was on the court as a shooting guard with fellow point guard sophomore Jenna Green.

Hunter, who finished 5 of 8 from three and managed two steals, appears to have adjusted well to her new role.

“I like it, it’s more freedom,” Hunter said. “It’s kind of hard because other teams do have some bigger players.”

Hunter essentially put the game on ice with three consecutive triples in the fourth quarter, as the Tribe stormed ahead to 61-54 with five minutes to play. The Huskies drew within two with under a minute, but Tremba sank a three to dispel any notions of a comeback. Northeastern had no similar success from the arc, shooting just under 30 percent as the Huskies dropped their fifth straight in a 68-62 win for the Tribe.

“We had to play small with our man defense, a lot of times we had four guards out there,” Swanson said. “Bianca played great defensively.”

Going forward with primarily four guard sets, Swanson isn’t making excuses for the Tribe continually losing the rebound battle, as the Huskies took the category 40-29, despite the height disadvantages with just one forward.

The College travels to Raleigh, N.C. next Friday to take on Elon with tipoff set to be at 7 p.m.