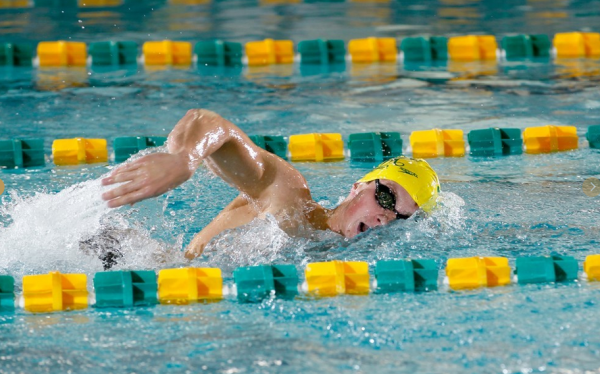 Despite a difficult weekend in which William and Mary lost to both South Carolina and East Carolina, both the men and women performed exceptionally well at the Carolina College Invitational. With the event serving as a final test before the Colonial Athletic Association Championships, the swimmers knew selection would depend on the weekend performance. The final few spots on the 20-man roster were on the line.

For the men’s side, all three swimmers achieved lifetime bests in the 500 backstroke. Freshman Joey Rento placed ninth in the William and Mary record books over the weekend, racing a 1:48.79 in the 200 preliminary backstroke race. Rento placed third overall in the final, and also placed sixth in the 200 butterfly event. The freshman recorded a 1:51.30 in the race, good for 12th in school history. Fellow freshman Brooks Peterson also finished No. 12  in school history in the 200 breaststroke with a 2:05.58. Freshman Ramzy Ali posted a lifetime best in the 1650 free, rounding out a weekend of highlights for the freshmen class.

The College’s upperclassmen also took care of business in their races, led by senior Austin Glass, who swam a solid fifth place in the 200 backstroke finals. Glass also posted an electric 50.16 in the 100 backstroke race. Teammate junior Nick DeLeon placed 13th in the Tribe record books and seventh place at the meet in the 200 butterfly finals. Fellow junior Conor Cudahy posted a 15:57.04 in the 1650 freestyle, good for sixth place.

William and Mary’s ladies carried a strong first day through the weekend, after winning Friday’s 400 IM relay. Sophomore Kitty Arenz led the women with two personal best times over the weekend. She beat her preliminary time by half a second in the 200 backstroke final, and her time of 2:03:08 put her 12th in school history, and fourth on the day. Fellow sophomore Meghan Schilken finished sixth, and both of them recorded lifetime bests in Friday’s 50 freestyle. Arenz and Schilken finished fourth and fifth respectively in the 100 backstroke. Senior Elena Marsilii, who took 10th overall in Friday’s 500 freestyle race, closed her Tribe swim career in eighth. The College placed very well in the 200 breaststroke consolation finals, as freshman Brooke Bruno finished ninth, and senior Courtney Mizerak followed in 10th. Freshmen Emily Schroeder and Nina Lesser placed 13th and 16th respectively in the 100 freestyle race.

The men and women will now gear up for the 2016 CAA Championships, which will take place in Richmond from Wednesday, Feb. 25 to Sunday, Feb. 28. The Tribe’s well-regarded swimmers will hope to put their best foot forward in the season’s most critical meet. The College’s men’s and women’s teams will both try to capture their second CAA titles, with the ladies having won the first one nine years ago, and the men looking to repeat from 2015.