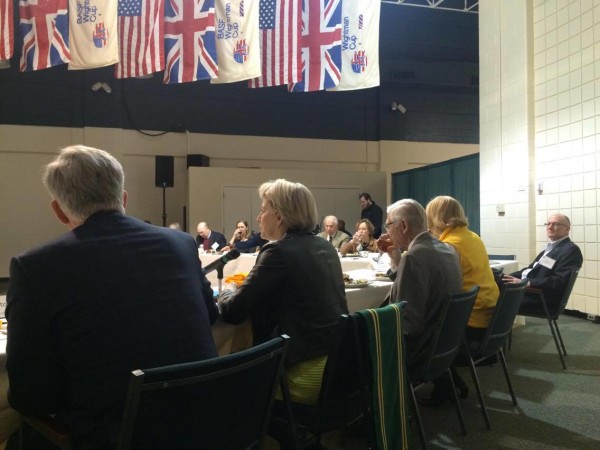 The College of William and Mary’s Board of Visitors Committee on Administration, Buildings, and Grounds met Thursday, Feb. 4 to discuss the progress of present and future building projects on the main College campus, as well as at the Virginia Institute of Marine Science.

Committee Chair Ann Green Baise, after calling the meeting to order and approving the minutes from the last meeting, opened by commending the decoration team responsible for their work on President Taylor Reveley’s house over the holidays.

VIMS Dean and Director John Wells then delivered a report on the institution’s capital projects. The projects include a research vessel, a consolidated science research facility, a faculty management building and an oyster research hatchery.

“There’s no heating, there’s no AC. It’s a touch building,” Wells said on the current facility.

The research vessel is a 93-foot boat scheduled to be completed in 2017. The consolidated scientific research center, a 32,000 square-foot building, will house five VIMS programs. The new facility management building will provide space for the management team to work and will also house the mail delivery service. The oyster hatchery will involve tearing down the current hatchery building, which was constructed in 1975. The new hatchery will contain facilities that the current building is lacking, as well as an access point to seawater for the researchers’ use.

“There’s no heating, there’s no AC. It’s a touch building,” Wells said on the current facility.

Wells also stated that VIMS received full funding from the Governor’s Budget Submission. The institution received $13.76 million to replace mechanical systems and repair the exteriors of certain buildings. Portions of this money will be used to eradicate mold and fix mechanical problems that Chesapeake Bay Hall, built in 1997, has experienced.

“[Chesapeake Bay Hall] has had problems from the days the doors opened,” Wells said.

Baise commended Wells for meeting the allotted budget granted by the governor. All the money granted to them will be used in maintaining facilities.

“To see something go through speaks well to your team,” Baise said.

After Wells delivered his report, Senior Vice President for Finance and Administration Sam Jones gave a presentation on the demolitions of Millington Hall and the Lodges, as well as approval for capital projects being financed outside the general fund.

“The Greenhouse is well on its way,” Jones said.

Before discussing these ventures, Jones gave an update on the Optional Retirement Plan for Higher Education. Jones, along with Provost Michael Halleran and a few other College administrators met with the Virginia Retirement System to discuss changes the organization was implementing in the current plan. Jones stated that the College is deliberating whether to administer its own retirement plans. He cited the programs at the University of Virginia, Virginia Tech, Virginia Commonwealth University and George Mason University, which already operate their own retirement plans for faculty.

Jones then delivered an update on campus construction plans. He began with discussing the Integrated Science Center III, which is an addition to the two already-existing science centers. The outside of the new building is finished, he said, leaving all remaining work to go toward the interior of the building. He also said that, in addition to the new facility, the greenhouse formerly on top of Millington Hall is being moved to the roof of the ISC I, in preparation for the demolition of Millington Hall.

“The Greenhouse is well on its way,” Jones said.

Jones then spoke about the progress being made with Tyler Hall, which has been completely gutted and furnished with a new staircase. It will house the government, economics and public policy departments. The attic is also being renovated to make room for faculty offices. He also stated that the construction on the west side of Zable Stadium has progressed on schedule. Jones also delivered updates on One Tribe Place and the new Integrative Wellness Center.

The Integrative Wellness Center will contain the student health center, counseling center and yoga rooms. He stated that the building will rely heavily on the use of glass to allow light into the building and offer views of the woods. The center will take the place of the Lodges located behind the Sadler Center. The Daily Grind will remain in the same place.

Jones discussed the projects affiliated with the For the Bold Campaign. He mentioned a new basketball practice facility, a new aquatics center, and an addition to the Muscarelle Museum of Art as possibilities.

He also detailed the Governor’s Budget Recommendations, which include an ISC IV to take Millington Hall’s spot.

However, Jones stated that before addressing certain portions of the governor’s recommendation, he would like to build a new fine and performing arts facility. He stated that, since the College focuses on the liberal arts and many resources have recently been spent on the construction of new science buildings, a performing arts center is important.

“This is a much higher priority project than the ones the governor has set in,” Jones said.

Baise moved to approve Jones’s stated resolutions, which were seconded and approved unanimously.