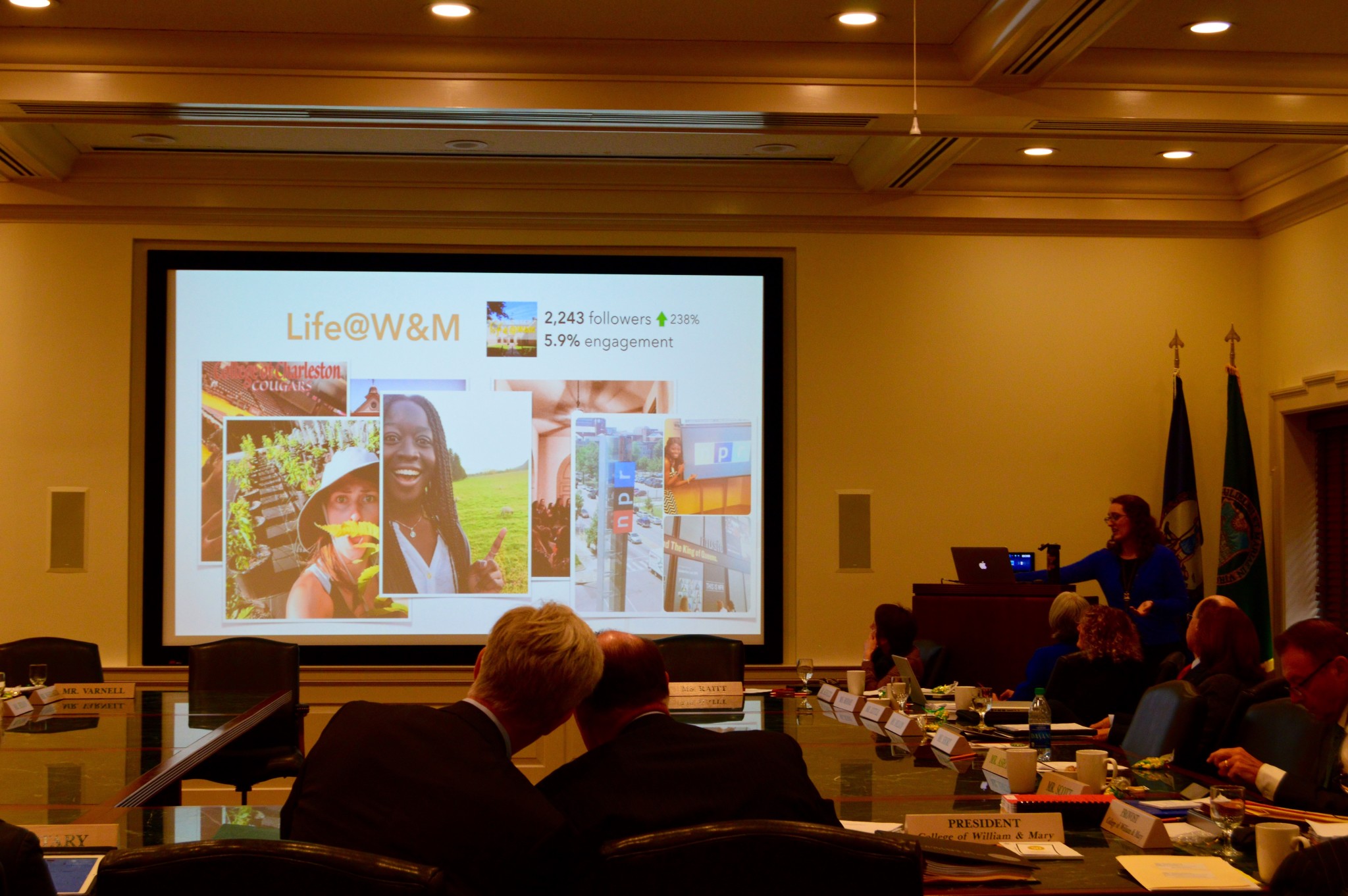 The College of William and Mary’s Board of Visitors Strategic Initiatives and New Ventures Committee  primarily discussed social media and legislation in the Virginia General Assembly during its meeting Feb. 4.

After an introduction by Committee Chair Thomas Frantz ’70, J.D. ’73, M.L.T. ’81, Associate Vice President for Government Relations Frances Bradford began the first of two presentations for the meeting. Bradford informed the Board that the College, which has nine alumni serving in the General Assembly, holds fewer representatives there than either the University of Virginia or Virginia Tech.

Bradford discussed highlights from the 20th annual “Road to Richmond” event, which brings students to Richmond to lobby on behalf of the College, including the high attendance by both students and legislatures. Bradford, moving on to the governor’s proposed two-year budget, also said that the new budget included a salary increase for the second year in a row, in addition to an increase in financial aid for Virginia students.

Bradford, addressing a phenomenon that occurs every year, said there is a bill being pushed through that would limit the number of out-of-state students the College could take. The College maintains a ratio of 65 percent in-state and 35 percent out-of-state ratio. A bill that would increase that 35 percent of in-state students to 45 percent already died on the floor — a “noble” death, according to College President Taylor Reveley.

“I’m excited to say that William and Mary and ODU have come together to create the Commonwealth Center on Recurrent Flooding Resiliency,” Bradford said.

The legislature also confirmed four of the Governor’s nominations to the College’s Board of Visitors: James Hixon J.D. ’79, M.L.T. ’80 and Karen Shultz ’75 for the first time, and the reappointments of Frantz and College Rector Todd Stottlemyer ’85.

“I’m excited to say that William and Mary and ODU have come together to create the Commonwealth Center on Recurrent Flooding Resiliency,” Bradford said. “The governor actually included nearly $500,000 in both VIMS’ budget and ODU’s budget to support this.”

According to Vice President for Strategic Initiatives Henry Broaddus, the presentations focused on how to highlight different aspects of the College.

“[What] the two presentations and discussions we have for you today have in common is about this aspirational reality and leading with that in a way that doesn’t mislead, but promotes William and Mary’s best features,” Broaddus said. “We thought it would be great to give the Board an update on how that’s being done on social media.”

The College’s Web Developer and Social Media Coordinator Tiffany Beker took over from there with a comprehensive social media report. She discussed the Social Media Users Group, which works to streamline content posted to social media across campus including multiple Facebook, Twitter and Instagram accounts.

She reported a few recent milestones for the College’s official social media accounts, including eclipsing 53,000 page likes on Facebook and reaching more than 20,000 followers on Twitter and more than 10,000 on Instagram.

According to Beker, the College’s most popular post on Facebook was for April Fool’s Day last year when they posted a William and Mary News story about paving over the Sunken Garden, which prompted a number of phone calls to their office. She also said that 4 percent of traffic to the College’s website comes from social media — second only to Google.

After Beker’s presentation, Frantz opened the floor to questions and any other topics for discussion before adjourning early.