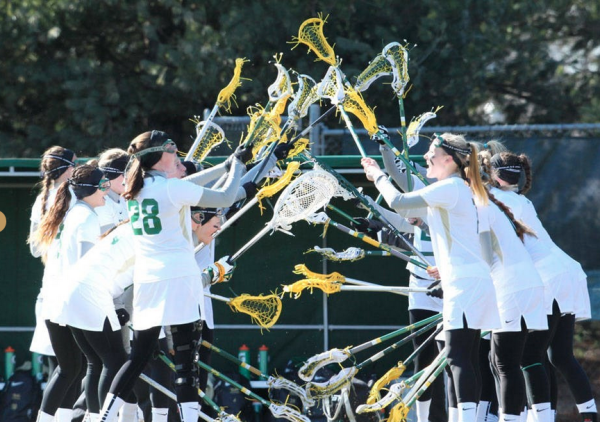 William and Mary’s lacrosse program, tracing its origins back to 1970, predates the formation of the NCAA Women’s Lacrosse League, whose first organized collegiate championships by non-NCAA bodies was in 1978, by a full eight years. It may be safe to assume that the College (1-1), with its 45 years of experience, has learned a few things about playing the sport that the nascent Gardner-Webb team has not quite mastered in its second year of existence. The Feb. 17 matchup favored the seasoned program, as the Tribe sprinted by the Bulldogs (0-3) to a 19-3 victory in Boiling Springs, N.C.

With the opening whistle, Gardner-Webb claimed the first draw control and promptly earned a free-position shot in just 54 seconds of action. Freshman goalkeeper Claire Duchene collected the save, marking the end of the Bulldogs’ luck for the greater part of the first half as the College pieced together a 5-0 run for the next eight minutes. Sophomore attack Abby Corkum fired the first goal at 28 minutes 30 seconds, followed up by a flurry of goals from 24:03 to 20:34, two by freshman attack Eloise Gagnon while senior attack Michelle Goss and junior defender Abby Junior contributed one apiece. The four-minute lull preceding the scoring burst indicated poor ball-control for both teams, with a combined eight ground balls and six turnovers.

Gardner-Webb finally got on the board at 20:09 after controlling the draw before suffering a 3-0 run by the College. Blame can hardly be placed upon Bulldogs goalkeeper Cassidy McDowell, who finished her day with an incredible 17 saves. She also forced two turnovers in a one-minute span, an unusual feat for a keeper.

Unfortunately for McDowell, William and Mary’s attack shot often and accurately. Every single one of the Tribe’s 36 shots was on goal. Although it’s still early in the season, shot selection seems to be a strength of the College, as the Tribe shot 83 percent on goal last week against No. 1 Maryland. The deadly combination of tripling shot output (36 on Gardner-Webb after just 12 against Maryland) and increasing on-goal percentage proved too much for the Bulldogs.

Despite the onslaught, Gardner-Webb was not left without hope to end the half, down 10-3 to the visiting Tribe. Eight College players scored in the opening frame, with Gagnon highlighting the half with her first career hat trick.

Offensively, Goss finished off a hat trick of her own, while four other College players tacked on their first goals of the contest. The Bulldogs’ meager offense failed to create more than three shots on goal.

Although the win was convincing on the scoreboard, the College does have a few points of concern on the stat-sheet. The Tribe committed 20 fouls to Gardner-Webb’s 18 and lost a tight groundball battle 31-28. Groundball stats may be skewed by a team’s poor pass and catch ability, evidenced by Gardner-Webb’s 23 turnovers.

Although the College held the turnover advantage 23-16, the existence of double-digit errors on the Tribe’s part against a relatively weak opponent is concerning with teams like No. 6 Virginia on the schedule. Gardner-Webb, by comparison, has only won a single game in program history, holding a dismal 1-19 record all-time.

Up next for the College is the home-opener against Oregon at Martin Family Stadium. Start time is set for noon Feb. 28.