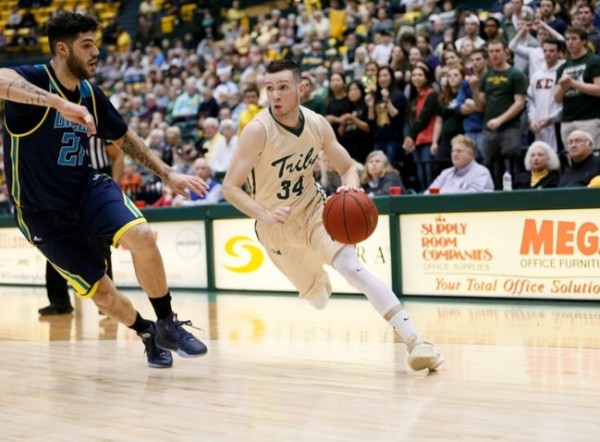 Senior forward Terry Tarpey barrelled down the court as the crowd sat at the edge of its collective seat. Rising up after passing North Carolina-Wilmington’s defenders, he slammed the ball into the net for the double-handed dunk, igniting the energy in Kaplan Arena as William and Mary surged in a massive 38-6 second-half run to an 87-69 victory over the top team in the conference.

After losing last week against Hofstra and Towson, the Tribe faced Colonial Athletic Association leader UNCW at home in Kaplan Arena Thursday. The story played out differently than the teams’ meeting in January, where the College fell in overtime. Physical gameplay, higher defensive coordination and sharp shooting flipped the script on the Seahawks, who led by as much as 12 midway through the second half as part of a 19-2 run of their own prior to the College’s run.

“Really nice win for a lot of reasons,” head coach Tony Shaver said. “One, we’ve had a real nice year, but had not beaten the top one, two, three teams in our league … What was more important than anything was we’re coming off a tough week.”

“Really nice win for a lot of reasons,” head coach Tony Shaver said. “One, we’ve had a real nice year, but had not beaten the top one, two, three teams in our league … What was more important than anything was we’re coming off a tough week.”

With the usual five out to start, Tarpey made an immediate layup in the first five seconds off the tipoff, signaling that this was to be an intense game for the duration. Though the contest remained close on the stat sheet, the Tribe (18-8, 10-5 CAA) retained a lead until eight minutes and 16 seconds remained in the half, at which time the Seahawks (20-6, 12-3 CAA) tied the game at 26 with a three-pointer. The lead bounced back-and-forth for a few high-scoring minutes before the College took off on a small run, pushing ahead as far as a seven-point advantage with three minutes before the buzzer. After the 1:27 mark the score was 42-38, with William and Mary holding a small lead. No one would score for the rest of the period, though Seahawks guard Mark Matthews, who made the three to tie at 8:16, missed a three that would have given the scoreboard just a one-point gap.

William and Mary made a habit of getting free throw opportunities throughout the first half. Through a combination of Seahawk miscues and Tribe drives to the basket, the College sent players to the free throw line early and often, earning double-bonus with just over nine minutes till halftime. Through the first half, UNCW committed 13 fouls; four of their five starters accrued two fouls each. Sophomore guard David Cohn and junior guard Omar Prewitt went to the line the most, the pair combining for 15 of the 19 attempts from the charity stripe in the first half. Cohn, on his way to a team-high 21 points on the night, stayed hot from the line for 6 of 6 free throws. Prewitt went 5 for 9 in the first half on the line. The biggest foul came from a combined personal foul and technical foul off an offensive rebound by Prewitt, which, upon occurrence, riled up the sizable crowd with a surge of boos. The Tribe notched 3 points out of the play via free throws.

Coming out of the locker room, William and Mary stayed consistent for a few minutes, keeping UNCW from scoring while the clock ran down from 19:40 to 16:52. Then, the College faltered as the visiting Seahawks began a 19-2 run, appearing to doom the Tribe’s upset bid.  UNCW gradually turned a home advantage of 47-44 into a 12-point deficit for the College at 61-49. The run lasted from 16:31 until 10:37 and was aided by nearly every conceivable mistake by the Tribe­ ‑ missed field goals, missed threes and losing the rebounds while also committing turnovers.

Me and Sean, after this we’ve only got one home game left,” Tarpey said. “We talked to each other and said, hey we’ve got to get these guys going, we know we can come back from whatever the score was. We picked up the intensity and that carried into the offense.”

Momentum shifted noticeably away from the Seahawks at 10:17 when junior guard Daniel Dixon made a lay-up in the paint for the first points in several minutes. Following the lay-up, senior forward Sean Sheldon caught an offensive rebound and made a successful jumper. As the crowd and the team appeared to grow more confident, a barrage of ranged shots occurred, with five of the next six shots coming from beyond the arc courtesy of Dixon, Tarpey and Cohn.

Tarpey placed an exclamation point on the comeback bid. He received a feed from Dixon off of a steal and stormed into the paint for an energizing two-handed slam dunk to put the score at 64-61, eliciting a roar from the crowd.  The Tribe had just taken the lead back off the previous shot, one of Tarpey’s three-pointers.

“Me and Sean, after this we’ve only got one home game left,” Tarpey said. “We talked to each other and said, hey we’ve got to get these guys going, we know we can come back from whatever the score was. We picked up the intensity and that carried into the offense.”

The run continued on the free throw line as Cohn eventually added another six points from fouls to go a perfect 12 for 12 on the night. UNCW wouldn’t score again until around the four-minute mark, after the Tribe scored 23 unanswered points to earn a 74-64 lead. The College defense stiffened considerably in the second half, as UNCW was without points for seven minutes and 14 seconds of action, allowing the Tribe run.

“I thought our activity in the zone and our rotations in the zone were much better in the last 12 minutes, and we gave up practically no second shots,” Shaver said.

“Kind of the message going into the game was to play with a chip on our shoulder,” Cohn said. “We had two rough games last week … and we didn’t quit.”

Even with the game in-hand now, the College continued to pad its lead, eventually reaching a game-high 21-point lead with one minute remaining. The Seahawks made one final basket, but the game had long been decided, the final score reading 87-69.

“Kind of the message going into the game was to play with a chip on our shoulder,” Cohn said. “We had two rough games last week … and we didn’t quit.”

The story of the game boils down to the two notable second-half runs, the latter of which allowed a skidding Tribe team to defeat a team on an 11-game winning streak. However, the final statistics provide interesting looks into how even the game was, despite the score. Both squads had 19 assists, 10 turnovers, 24 points in the paints, and 26 successful shots from the floor.

Despite both having 26 shots from the floor, UNCW had a 40 percent completion percentage while the Tribe had 49 percent completion, showing that William and Mary’s defense stepped up while staying fairly consistent with other top offensive performances this season.

The Tribe limited the Seahawks to 9 of 30 from three and just 11 free throw attempts. Conversely, the College was 10 for 19 from range and 25 for 33 on free throws. Cohn led the team with 21 points and six assists, while Sheldon had a team-high eight rebounds and three blocks.

After the high of winning such a exciting victory, the Tribe will attempt to refocus on Saturday at 2 p.m. against CAA-bottom dweller Drexel (3-23, 1-14 CAA) in Kaplan Arena, where Tarpey and Sheldon will be honored for senior day.