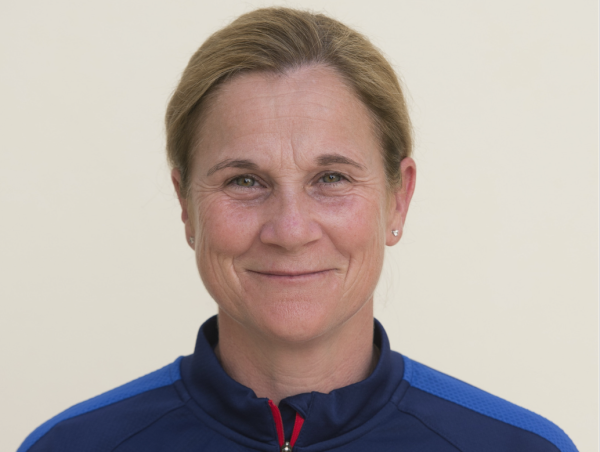 United States Women’s National Team head coach Jill Ellis ’88 will address graduating members of the College of William and Mary Class of 2016 at their Commencement ceremony May 14.

Ellis has held the head coaching position since May 2014 and in 2015 coached the team to World Cup victory for the first time since 1999. FIFA named her Women’s World Coach of the Year in January. Ellis last returned to the College’s campus during Family Weekend, when she was named a Tribe Champion for Life.

“Jill Ellis is a coach of compelling ability who leads on the world stage,” College President Taylor Reveley said in a press release. “She is also a dedicated alumna of her alma mater. William & Mary is enormously proud of her.”

Before joining the Women’s National Team, Ellis was a member of coaching staffs for a number of different universities, including the University of Virginia, and served as head coach at University of Illinois and University of California, Los Angeles. National Soccer Coaches Association of America named Ellis Coach of the Year in 2000 for leading the UCLA Bruins to a final in her second year of coaching. During her time at UCLA, the Bruins would appear eight times at the NCAA Final Four.

“It is also our great privilege to honor John Bridgeland, whose record of public service and civic engagement is simply remarkable,” Reveley said in a press release.

While a student at the College, Ellis played forward from 1984 to 1987, helping the Tribe to the NCAA tournament in all four seasons. Since 2002, she has been a member of the College’s Athletic Hall of Fame. During the ceremony, she will also receive an honorary degree.

The College will also honor John Bridgeland with an honorary degree. Bridgeland serves as CEO of Civic Enterprises, a public policy firm, and co-chair of the Service Year Alliance, which advocates for students to complete a full-time, paid year of service.

“It is also our great privilege to honor John Bridgeland, whose record of public service and civic engagement is simply remarkable,” Reveley said in a press release. “Bridge is one of the leading proponents of a national year of service for young adults. His ties to William & Mary run deep.”